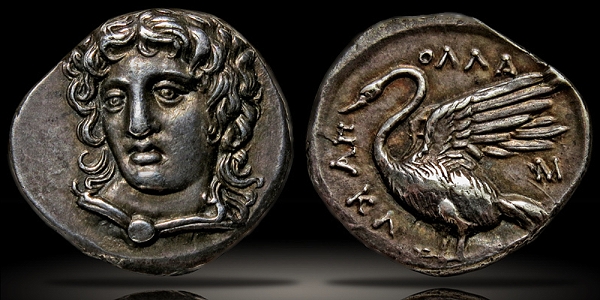 Greek Coin – An apparently unique variety (the only specimen known with this magistrate name) of an extremely rare type.

Undoubtedly the finest specimen known of this wonderful issue bearing one of the finest front-facing portraits on Greek coins. Of extraordinary late Classical style and with a delightful old cabinet tone.

Perhaps unexpectedly, Clazomenae produced some of the finest facing-head portraits on all Greek coins, with most of them being unsigned masterpieces. However, one artist, Theodotos must have been renowned in his day, for he boldly signed his work “Theodotos made it”.

Erhart notes that this kind of declaratory signature has few parallels on a Greek coin, perhaps only at Cydonia on Crete and at Thurium in Lucania.

Apollo, who here is so perfectly represented, was the principal god of Clazomenae. With a work of such mastery one is obliged to find the source of its inspiration, and it has been recognized that it closely resembles the facing Apollo heads of Amphipolis. Even so, the possible influence – direct or indirect – of Kimon’s Arethusa and the Helios portraits of Rhodes cannot be dismissed.

In the tradition of so many Greek cities, the swan on this coin is a canting type based on the city name. The importance of these majestic birds appears to have been two-fold at Clazomenae: not only was this bird sacred to Apollo, but it may well be that the city name was derived from the verb klazein, which, among other things, was used to describe the whirr of a bird’s wings or the screech or cry of their calls.

The careful, naturalistic studies of swans at Clazomenae find no equal in Greek coinage. Sometimes the bird is shown with wings open as it cranes its neck over its shoulders to look back or, perhaps, to tend to its feathers. Other times – as here – the bird stands forward, wings raised, its neck assuming an elegant S-shape.

On this particular die, bearing the name of the magistrate Apollas, the swan’s body is engraved with the greatest attention to detail, even down to the stare of the bird, which is focused and determined, as if it has been caught in a moment of standing its ground.

Editor’s Note: Greek coins are, incidentally, the only art form from the ancient Greek world that can still be bought and owned by private collectors of modest means.