The much anticipated sale of the spectacular Prospero Collection concluded at 03.30 EST this morning and, after a phenomenal eight hour ‘white glove’ auction, the team at Baldwin’s had a lot to smile about. Although results are still in the process of being confirmed initial figures released by the company state that the sale total for all 642 lots is approximately US$25,000,000 (including buyer’s premium at 17%), more than double the pre-sale estimate. 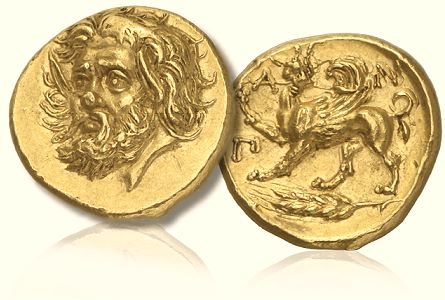 Lot 213, the catalogue cover coin, broke all previous world records for an ancient Greek coin, selling for a phenomenal US$3,250,000 (hammer). This beautiful example of a Gold Stater from Pantikapaion depicts the head of a satyr, a character widely used in Greek mythology. The coin is one of the most spectacular numismatic objects to have survived from the classical world and is one of the greatest and admired of all the ancient Greek coins. This miniature work of art is an incredibly rare artistic masterpiece and it was no surprise when bidding soared past the pre-sale estimate of US$650,000.

The magical worlds of Greek history and mythology depicted in the coins from this dazzling collection certainly captured the imagination of the collectors, dealers and investors bidding in the room and online via the services of www.the-saleroom.com . Around 200 bidders were in attendance in the magnificent Vanderbilt suite at the Waldorf Astoria hotel (a fitting venue for the most significant auction of ancient Greek in the last 20 years) with an additional 156 registered to bid online. Anticipation was building prior to the auction and an electrifying buzz filled the air when the auctioneer opened the first lot at US$450 and was immediately bid up to US$1,700. Excitement grew as lots proceeded to sell for three, four, five times their pre-sale estimates, it became clear that the prices achieved in this landmark auction would be the new benchmarks for high quality Greek coins.

A good stalwart group of international collectors with an eye for the highest quality Greek coins took the bidding to new levels never seen before in this market. Bidding from start to finish was extremely strong and lots were sold to many different bidders from around the world, with a noticeable presence from European and American dealers and collectors. The internet too played an important role in the success of the auction with a total of US$1,400,000 selling to bidders online from around the globe. The most expensive single coin sold online went under the hammer at US$150,000 and the internet was responsible for a great deal of underbidding throughout the sale.

‘The sale of the Prospero collection has far exceeded our expectations. It has truly been a once in a generation auction and one that will go down in numismatic history. It was an honour and a privilege to catalogue this collection and the results achieved are testament to the dedicated team at Baldwin’s.’

The coins in this auction broke records across the board but the most noteworthy sales included lot 149, a Silver Tetradrachm of Naxos, a wonderful example of one of the greatest of all fifth-century Greek coins, which sold for US$850,000 against it’s pre-sale estimate of US$125,000 and lot 411, an outstanding Stater of Phaistos with an exceptional provenance, which achieved a staggering US$650,000 against the pre-sale estimate of US$40,000.

‘The auction has just concluded after eight hours. We are delighted to have sold this important and comprehensive Prospero Collection for a total of approximately $25 million, making it the largest auction in Baldwin’s history.’

In the year that sees Baldwin’s celebrating their 140th anniversary the sale of the Prospero Collection has put the company firmly in the centre of the international numismatic stage. A packed auction schedule for 2012 should see them go from strength to strength.

150
Sicily, Naxos (c. 415 B.C.), Silver Tetradrachm, 16.94g., . Bearded head of Dionysos facing to right, wearing a stephane adorned with an ivy-wreath. Rev. NAΞION, naked and bearded Silenos squatting facing, his head turned to left towards the kantharos that he holds in his right hand, he holds a thyrsos in his left hand, an ivy-plant creeps upwards to his left, behind which his tail is visible (Cahn 101 (V66/R83); Rizzo pl. XXVIII, 16 (this obverse die), 17 (this reverse die); BMC 18; SNG Lloyd 1156). Well-struck, attractive cabinet tone, good very fine, an excellent example of this famous coin, of exceptional classical style.

23
Calabria, Tarentum (c. 344-338 B.C.), Gold Stater, 8.56g., . Head of Hera facing to right, her curling hair held in a stephane decorated with palmettes, a diaphanous veil is visible on both sides of her neck, small E behind, a small dolphin swimming downwards and TAPA before. Rev. TAPANTINΩN, Taras standing to right, raising his hands in supplication towards Poseidon, seated left on a stool, wearing a himation over his lower limbs and holding a trident, K beneath stool, a star and├ on right (E.S.G. Robinson, Ancient Greek Coins in the possession of William Harrison Woodward (privately printed, Oxford, 1928), no. 4 (this coin); Vlasto 1 (these dies); Vlasto, ‘Le monnaies d’or de Tarente’, JIAN II, 1899, p. 306, I; A.J. Evans, ‘The Artistic Engravers of Terina and the Signature of Evaenetos on its later Didrachm Dies’, NC 1912, p. 45; Head, BM Principal Coins, pl. 25, 7 (these dies); HN Italy 901 (these dies); Kraay – Hirmer pl. 109, 315, and colour plate X). Two !
small insignificant nicks on the obverse and one on the reverse edge, extremely fine, very rare, a superb example and one of the most beautiful designs to appear on an ancient Greek gold coin.
Hammer: US$350,000

369
Attica, Athens (c. 467-465 B.C.), Silver Dekadrachm, 42.56g., . Head of Athena facing to right, wearing a crested Attic helmet decorated with three olive-leaves and a palmette, and wearing an earring and a necklace. Rev. A-Θ-E, owl standing facing, with its wings spread, an olive-twig with two leaves and fruit at upper left; the whole within an incuse square (W. Fischer-Bossert, The Athenian Decadrachm, 19c (O10/R19) (this coin); cf. Seltman 445-452; Starr group II.C; ACGC 188). Struck in high relief, a few light marks otherwise about extremely fine, extremely rare, only two other examples known from this pair of dies, of the highest numismatic and historical importance and a magnificent example of ancient art.

For all enquires about The Prospero Collection or to request a copy of the collection catalogue please contact Paul Hill at [email protected] or on +44 (0)20 7930 6879.