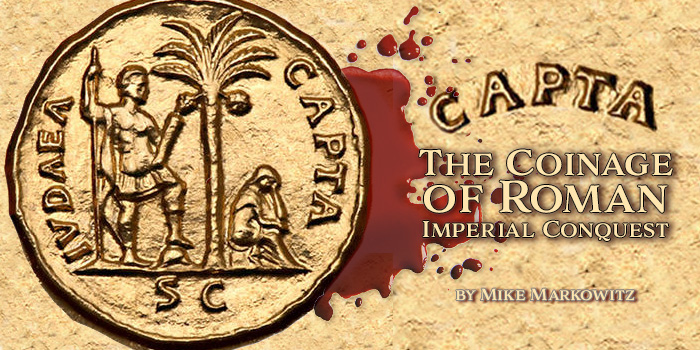 He hath brought many captives home to Rome
Whose ransoms did the general coffers fill:

ROME LIVED BY CONQUEST. The spoils of conquered territories and peoples helped to pay the expenses of the state. Mark Antony’s funeral oration for Caesar in Shakespeare’s words is not quite right–it was not so much the ransom of captives, but the sale of prisoners as slaves that filled the treasury’s general coffers. Romans proudly celebrated their conquests on their coins. The images and inscriptions that they chose for this kind of official propaganda tell us much about how they thought. For Romans, “Asia” meant the western part of what is now Turkey, which included many rich and famous Greek cities like Ephesus, Pergamum and Miletus along the Aegean seacoast. When King Attalus III of Pergamum died without an heir in 133 BCE, he bequeathed his land to Rome and it eventually became the province of Asia.

In 30 BCE, Octavian (soon to be the future emperor Augustus) captured the province from the forces of Mark Antony. A special issue of small silver coins (the 1.75 gram quinarius, valued at one-half a denarius) commemorated Asia’s return to Rome’s control. The coin is relatively common for a quinarius, but high-grade examples with full details are scarce[1].

The inscription ASIA RECEPTA might be translated as “Asia Taken Back” in the sense of peaceful welcome, rather than violent occupation. The reverse shows the cista mystica flanked by two serpents and topped by the figure of Victory holding her symbolic attributes: a wreath and a palm branch. The cista mystica was a sacred basket of snakes used in secret rites of Dionysus, and many cities in the region adopted it as the reverse design for their silver coins (so-called “cistophoric tetradrachms”). Following the suicide of both Mark Antony and Cleopatra (August 30 BCE), Octavian took over Egypt as a Roman province. To mark this conquest, gold and silver coins were issued c. 28 – 27 BCE at an uncertain mint in the East, bearing Octavian’s portrait on the obverse and a crocodile on the reverse, with the Latin inscription AEGYPTO CAPTA (“Egypt Captured”). For Romans, the Nile crocodile (Crocodylus niloticus[2]) was an iconic symbol of Egypt. In the first century BCE, Armenia was an extensive kingdom covering much of eastern Turkey and parts of Iran and the Caucasus. A buffer state between the contending empires of Rome and Parthia, it was often invaded and constantly a target of intrigue. In 20 BCE, Augustus placed a Roman client king, Tigranes III (ruled 20 – 10 BCE), on the Armenian throne.

This diplomatic triumph was celebrated on a series of coins. A magnificent gold aureus with the inscription ARMENIA CAPTA depicts Victory kneeling on the back of a bull. The bull may symbolize a local deity, Mithra, or the Taurus mountain range. An example of this rare coin from the famous Nelson Bunker Hunt collection sold for over $77,000 in 2008[5]. The silver denarius inscribed ARMENIA CAPTA[6] combines other symbols associated with the region: the distinctive tall “tiara” crown worn by Armenian kings, and a bow case and quiver (Armenian cavalry were famed for their skill in archery).

On 30 August 70 CE, Roman legions stormed the Temple in Jerusalem, where the last rebel defenders of the city held out against hopeless odds. Although scattered rebel strongholds held out for a few more years, the Jewish revolt was crushed. The Temple treasury had accumulated gold and silver for centuries, and the rich spoils of Jerusalem paid for the construction of the Colosseum in Rome. Emperor Vespasian’s victory in the Jewish War is a major theme in the coinage of his reign (69 – 79 CE) and that of his son Titus (71- 81).

One of the earliest issues may be a unique gold aureus from an uncertain Eastern mint, inscribed IVDAEA RECEPTA (“Judea Taken Back”)[7]. On the reverse, a female figure “in an attitude of mourning” stands beside the palm tree that symbolizes the province. As the bitter and bloody campaign to suppress the revolt dragged on, the Roman attitude hardened, and this is reflected in the increasingly harsh terminology of the coin inscriptions. A very rare aureus of 71 CE is inscribed IUDAEA DEVICTA – “Judea defeated”[8]. The definitive triumphant inscription, IUDAEA CAPTA (“Judea Captured”) comes later in 71 on a famous sestertius depicting Vespasian standing beside a palm tree, while a female Jewish captive sits mourning[9]. On Harlan Berk’s list of the hundred greatest ancient coins, this type is #33.

On the more common denarius[10], which was issued in massive quantities, the inscription is simply IUDAEA below the mourning captive, and “CAPTA” would have been understood by Roman users.

The vast wilderness between the Rhine and the Elbe, inhabited by ferocious warlike tribes, was Germania, where three legions under the hapless P. Quinctilius Varus were wiped out in 9 CE at the Battle of Teutoburger Wald. Germania also meant two frontier provinces carved out of the Rhine valley, Germania Inferior to the north and Germania Superior to the south. Successive waves of barbaric invaders crashed against the heavily fortified Rhine barrier, which usually held, allowing the current emperor to add Germanicus (“Conqueror of the Germans”) to his honorific titles[11].

In 83 CE, the emperor Domitian led a military expedition to the Black Forest region. Little is known of this operation, but Domitian celebrated it with a handsome bronze sestertius inscribed GERMANIA CAPTA. This echoes the IUDAEA CAPTA issues of Domitian’s father (Vespasian) and brother (Titus).

The reverse shows the usual trophy of arms (a display of captured enemy weapons set up on a battlefield), with male and female German captives. In a 2016 European auction, a superb example of this type went for over $3,100[12]. For most of its long history (247 BCE – 224 CE) the Empire of Parthia was Rome’s bitter enemy. In 53 BCE, a Roman Army under M. Licinius Crassus was annihilated by the Parthians at Carrhae in Syria, and the sacred eagle standards of seven legions were captured[13].

In 115 CE the emperor Trajan launched an invasion of Mesopotamia, capturing the Parthian capital at Ctesiphon (near modern Baghdad). A gold aureus issued at Rome in 116 celebrates this victory, with the usual image of bound captives seated among captured weapons, and the proud boast PARTHIA CAPTA[14].

Unfortunately for Rome, this was a case of imperial over-stretch. Parthia eventually recovered, and would continue to trouble Rome for more than another century. 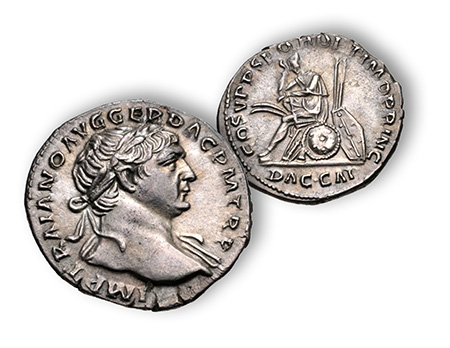 Trajan’s conquest of Dacia (modern Romania) between 101 and 106 was the last major addition of territory to the Roman Empire. Trajan added the honorific Dacicus (“Conqueror of Dacia”) to his string of titles[15]. The commemoration of this victory is abbreviated in Trajan’s coin inscriptions: DACIA CAPTA becomes DAC CAP. The inscription is tucked unobtrusively into the “exergue” on the reverse[16]. One type of denarius shows a mourning Dacian captive seated on a pile of captured weapons[17], a less common type shows the captive standing with hands bound[18].

The Sarmatians were a nomadic Iranian tribe living on the Ukrainian steppes. In the fourth century CE, their migration brought them into conflict with Rome on the Danube frontier. Constantine the Great (reigned 306 – 337) marked his defeat of the Sarmatians with a massive issue of silvered bronze coins inscribed SARMATIA DEVICTA. Although Roman emperors would continue to celebrate their largely imaginary victories on the coinage for more than a century after Constantine, this is one of the last Roman coins that commemorates a real conquest. Rome never established a province of Sarmatia; the open steppe was simply too hard to defend against mounted tribal warriors. This type, struck at numerous mints, is extremely common. Examples with intact silvering command a premium[19].

[11] On coins this is often abbreviated as GERM. It does not imply that the emperor was infected.

[13] Augustus recovered them in 20 BCE in a major diplomatic coup, commemorated on a famous coin, inscribed SIGNIS RECEPTIS, “the standards returned”.

[16] An “exergue” in numismatics is a narrow section at the bottom of a coin, usually separated from the rest of the field by a line.

Sydenham, E. A. Historical References to Coins of the Roman Empire. London (1968 reprint of 1917 edition)