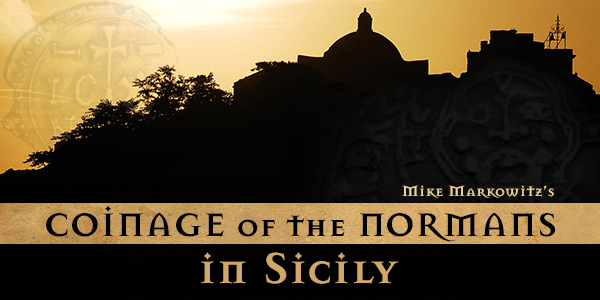 Descendants of ferocious Vikings who settled in the French province of Normandy, the warlike Normans were eventually Christianized. They served as mercenaries across Europe. A band of Normans arrived in Sicily in 1059 (seven years before their relatives crossed the English Channel). Within a few generations they created a multicultural society that was among the most brilliant achievements of medieval Europe.

Norman rulers of Sicily struck a remarkable variety of coins that help us to understand that achievement. Most Norman coins of Sicily were struck at Palermo or Messina. The fierce ancient rivalry between these two cities seems to be a permanent feature of Sicilian life.

Duke Robert de Hauteville (c. 1015-85) led the conquest of Sicily. He was nicknamed Guiscard (meaning “wily”, “clever” or, my personal favorite, “weasely”). The only portrait coin of Robert was struck (usually very poorly) at Salerno on the Italian mainland some years later. It depicts him in the regalia of a Byzantine emperor, a position he tried for years to attain, either by marriage or conquest. The reverse shows Salerno’s arches and towers. 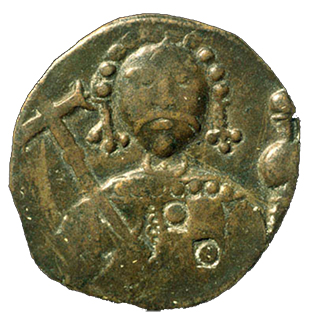 When the Normans arrived, Sicily was fragmented into three squabbling emirates ruled by Muslim Arabs (although much of the population was still Christian and spoke Greek). The circulating coinage consisted of a debased tari (1 gram, about 16 karats fine) valued at a quarter of a gold dinar, any a tiny kharruba, valued at 1/16 of a silver dirhem. Robert continued issuing the coinage the natives were familiar with, substituting his own name in the Arabic inscriptions.

Roger I (c. 1031–1101) completed the conquest of Sicily begun by his brother Guiscard. The last Arab stronghold, Noto, fell in 1091. The obverse of Roger’s anonymous gold tari bears the Arabic inscription, “there is no God but Allah, Muhammad is the prophet of Allah”–an unusual choice for the coinage of a Christian knight but coinage is very conservative, and this may have been reassuring to Roger’s new Muslim subjects. The reverse bears a T-shaped cross with three pellets.

Roger’s copper trifollaro, or three-follis piece, was issued at Mileto, on the Italian mainland. On the obverse, Roger appears mounted, in armor, holding a lance and the distinctive kite-shaped Norman shield, with the Latin inscription “Count Roger”. The reverse is a Byzantine-style image of the Madonna and child, inscribed “Mary, mother of the Lord”.

Roger II (1095–1154) was the second son of Roger I. He succeeded his short-lived elder brother, Simon, as Count of Sicily in 1105. After uniting all the Norman territories in Italy he was crowned as King of Sicily in 1130; his gold tari are relatively common[1]. The obverse bears an Arabic inscription: “King Roger the magnificent, powerful through Allah”[2]. The coins are inscribed with dates according to the Islamic calendar. The reverse bears a cross, with the Greek abbreviation IC XC NI KA (“Jesus Christ Conquers”). In 1140, King Roger ordered an extensive reform of the coinage for his unified kingdom, including a handsome new silver piece of about 2.5 grams, the ducalis. This coin was cup-shaped, in contemporary Byzantine style, with a boldly rendered bust of Christ on the obverse (convex side), and standing figures of King Roger and his son Roger, Duke of Apulia on the reverse (concave side). The abbreviated inscriptions are now in Latin.

The ducalis is quite scarce; medieval silver coins in good metal have a low survival rate. An exceptional example sold for $1,500 USD in a 2011 auction[3].

The need for small change in the kingdom’s thriving economy was met by an extensive copper coinage, including a follaro of about 1.5 grams, with a crude image of the enthroned king on the obverse, and a cross on the reverse. After Roger II died in 1154, the throne passed to his fourth son, known to history as William the Bad (Gugghiermu lu Malu in Sicilian). He was a capable, tolerant and intelligent ruler; the nickname was applied by local barons who resisted his authority. His gold tari bear the Arabic legend “King William the peaceful, by order of Allah”[4]. His coinage generally continued the pattern set by his father. When he died in 1166, his son, only 11 years old, took the throne as William II under the regency of his mother, Margaret of Navarre.

William’s character is very indistinct. Lacking in military enterprise, secluded and pleasure-loving, he seldom emerged from his palace life at Palermo. Yet his reign is marked by an ambitious foreign policy and a vigorous diplomacy[5].

Known as “William the Good” (Gugghiermu lu Bonu in Sicilian), his reign of 23 years was remembered as a golden age of peace and prosperity in the troubled centuries that followed. In the hills outside Palermo William ordered the construction of the magnificent Monreale cathedral, which holds his tomb. On his gold tari, the Arabic inscription is “King William the second, desirous of power through Allah”[6]. William’s large, anonymous copper trifollaro was an innovative design, with a facing lion’s head (the badge of the dynasty) on the obverse, and a date palm tree on the reverse. Very fine examples of this common type go for under $100 at auction. William II died in 1189 without an heir, and Tancred of Lecce, an illegitimate grandson of Roger II, seized the throne. He was nicknamed “the Monkey King” because of his short stature and unattractive appearance. On his rare gold tari, the Arabic inscription is “King Tancred the Victorious through Allah”[7]. Tancred also issued tiny silver coins (quarto di tercenario) of less than half a gram, with abbreviated Latin on one side and Arabic on the other. In 1191 Tancred negotiated a treaty of friendship with the English king Richard I (“The Lionheart”) who visited Sicily on his way to crusade in the Holy Land. Constance, a daughter of King Roger II and wife of Holy Roman Emperor Henry VI, had a stronger dynastic claim to the Kingdom of Sicily, and, more to the point, a stronger army. When Tancred died in 1194, his son, aged four, ruled for 10 months as William III before Constance and Henry deposed him. Coins in the name of William III are rare, but an example of a double tari sold for 900 euros in a 2015 European auction.

The standard reference in English is Grierson and Travaini (1998), which currently sells for up to $240, if you can find a copy. Spahr (1976), in Italian, is the reference usually cited in auction catalogues and sells for about $175.

With strong links to Islamic, Byzantine and European coinage of the medieval era, and including just seven rulers spread over a span of 135 years, the coinage of Norman Sicily is one of the more accessible fields of medieval coinage. Medieval numismatics is sometimes viewed as a backwater of nearly unreadable, endlessly repetitive types in low-grade silver alloy. But Norman Sicilian coinage presents examples in all metals and all price ranges, with diverse designs and some fascinating history – all of which is superbly narrated by John Julius Norwich in The Normans in Sicily (1970).

[1] Collectible examples can be found for under $150 USD, making this type one of the most affordable medieval gold coins.

Grierson, Philip and Lucia Travaini. Medieval European Coinage With a Catalogue of the Coins in the Fitzwilliam Museum, Cambridge. Volume 14: Italy. Cambridge (1998)

Norwich, John Julius. Sicily: An Island at the Crossroads of History. New York (2015)

–. “Apects of the Sicilian Norman Copper Coinage in the Twelfth Century”, Numismatic Chronicle 151 (1991