By the third millennium BCE, a unique culture was emerging on a narrow strip of the eastern Mediterranean coast that would have an enormous impact on Western Civilization

A SEMITIC PEOPLE, the Phoenicians developed remarkable proficiency in shipbuilding, seafaring and trade, as the prophet Ezekiel (lived c. 622 – 570 BCE) observed[1]. Phoenicians invented the alphabet[2], which their Greek neighbors and trading partners adopted and transmitted to us. In turn, they acquired the idea of coinage from the Greeks, and the coins of the half-dozen Phoenician city-states give us a window into their history and beliefs.

Like so many things in ancient numismatics, the date and identity of the first Phoenician coins are uncertain. The earliest date generally accepted by scholars is about 450 BCE. Initially, the coins were all silver–from distant mines in Spain and possibly Sardinia–with weights based on variations of the Babylonian shekel of 7.2 grams[3]. Very small fractions were issued, down to 1/24 shekel (about half a gram, and 10 mm in diameter).

Tyre has built herself a rampart, and heaped up silver like dust, and gold like the dirt of the streets.
–Zechariah, 9:3 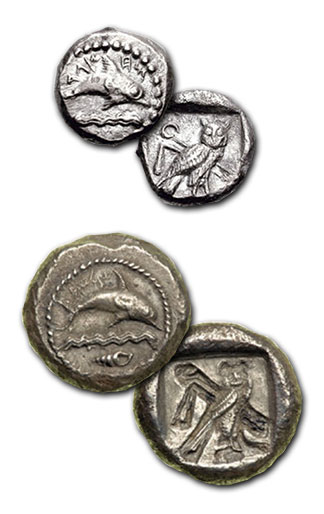 Built on a rocky offshore islet and surrounded by strong walls, Tyre (today the Lebanese city of Sur) was connected to the mainland in 332 BCE when Alexander the Great built a causeway almost a kilometer long in order to storm and sack the city. Early Tyrian coins show a dolphin leaping over waves on the obverse and an owl[4] with a crook and flail–symbols of the Egyptian god Osiris[5]–on the reverse. The reverse is often “incuse” – deeply sunk below the surface of the coin.

Later coins of Tyre replace the dolphin, or supplement it, with an image of the city’s patron deity Melkart (or Melqarth) holding a bow and riding on a hippocamp (a mythic winged beast with the forepart of a horse and the tail of a fish). On small denominations the hippocamp appears alone. A superb shekel of this type sold for US$13,000 in a 2015 auction[6].

Tyre and the other major Phoenician cities served as mints for the massive coinage of Alexander the Great and his successors (something beyond the scope of this article), but in 126 BCE the city resumed issuing its own coins – silver shekels and half-shekels inscribed in Greek, depicting Melkart on the obverse and an eagle on the reverse. Because of their high purity–and despite the pagan imagery (Hendin, 476)–these coins were ritually acceptable to the Jewish Temple authorities in Jerusalem, and Biblical scholars consider them to be the 30 pieces of silver paid to Judas Iscariot.

“Now therefore command thou that they hew me cedar trees out of Lebanon… and unto thee will I give hire for thy servants according to all that thou shalt appoint: for thou knowest that there is not among us any that can skill to hew timber like unto the Sidonians.”
–Solomon to Hiram of Tyre, I Kings, 5:6

Sidon (today the Lebanese town of Saida, 25 miles or 40 km north of Tyre) was probably the first Phoenician city to issue coins, and for many centuries it was the leading city of the region. Jezebel, consort of the ninth century BCE Hebrew king Ahab, was a Sidonian princess[7].

One of the earliest coins of Sidon (c. 450 BCE) is a tiny 1/16 shekel depicting a ship with a triangular sail on the obverse, as well as the stepped stone platform of the Temple of Eshmun, which still stands as one of the oldest surviving Phoenician sites. An example of this very rare coin sold for US$7,000 in a 2015 auction[8].

During most of the fifth century BCE, Sidonian coins depicted a warship rowing below the towers of the city wall on the obverse. On the reverse, the Persian king holding a dagger fights with a rearing lion. This very ancient imagery acknowledges Sidon’s formal submission to Persian rule. A magnificent half-shekel issued by an uncertain ruler c. 435 BCE shows a galley with its sails lashed up to the yardarm on the obverse and a standing figure of the Persian king firing an arrow on the reverse. This coin sold for US$40,000 in a 2015 auction, possibly the record price for a Phoenician coin[9].

In the fourth century BCE, Sidon issued heavy double-shekels (about 26 grams; nearly an ounce of silver) retaining the warship over zig-zag waves but bearing a new reverse design of the Persian king riding in a chariot with a driver, followed closely behind by a smaller figure of the king of Sidon–on foot. The coin imagery clearly reflects the political relationship. During this period, Sidonian coins begin to carry a date, with numerals expressing the king’s year of reign.

About 40 miles (67 km) further up the coast from Sidon is Byblos also called Gebal (now the Lebanese town of Jubayl). One of the commodities that Byblos traded throughout the Mediterranean world was Egyptian papyrus. The name of the city became so closely associated with the writing material that the Greek word for “book” became biblion–whence comes our word “bible.”

Possibly as early as 480 BCE, Byblos issued coins bearing a sphinx on the obverse and an enigmatic symbol (possibly a stylized thunderbolt or lotus flower) on the reverse. Later the Tyrian hippocamp symbol appears on the coinage.

In the fourth century BCE, the kings of Byblos issued magnificent two-shekel pieces (dishekels) showing a warship manned by helmeted warriors above a hippocamp on the obverse. Near the bottom, an inconspicuous snail shell appears, symbolizing one of the most famous Phoenician exports – the precious purple dye extracted from the marine snail Murex brandaris[10]. The reverse presents a dramatic scene of a lion attacking a bull, a very ancient motif in the art of Mesopotamia.

On the obverse of the tiny and rare 1/16 shekel, there is only space for one warrior in the warship, but the reverse is completely different: a vulture, modeled in relief, perched upon a ram, modeled in incuse. For such a small coin, this is a technically-challenging design.

Arados, or Arwad, is an island just offshore from the modern Syrian city of Tartus (about 52 miles or 84 km north of Byblos. It began issuing coins in the late fifth century. On the obverse of its coinage is a sea god, half man and half fish (variously identified as Dagon[11] or Baal-Arwad), holds a dolphin in each hand. On the reverse, we see the familiar warship and hippocamp. The later coinage of the city shows the bearded head of the god–now with a Greek-style laurel crown–on the obverse, and a warship with an abbreviated inscription and date on the reverse.

Arados regained the right to issue civic coinage in 259 BCE and produced a long series of handsome Hellenistic-style drachms and tetradrachms that closely copied the honey bee and stag design of the famous Greek city of Ephesus.

Narrowly confined in their homeland between the mountains and the sea, the Phoenicians spread out, establishing colonies across the Mediterranean. One of the first was Kition on the island of Cyprus. The most successful Phoenician colony in the west was Carthage in North Africa.

Standard references in English include a British Museum catalog (1910) and Betlyon, The Coinage And Mints Of Phoenicia (1982), which can be found second-hand for about US$110. Much of the numismatic literature on Phoenicia is in French. Early Phoenician coins are generally scarce, but collectible examples can be found in all price ranges.

[3] An endless source of confusion for numismatists, the “shekel” could be anything from 7 to 17 grams depending on the time and place. The Old Testament shekel of Israel was probably about 11 grams.

[4] The Tyrian owl is rendered as the Egyptian hieroglyphic “M”, rather than the familiar owl of Athenian coinage: https://en.wikipedia.org/wiki/Owl_(hieroglyph)

Betlyon, John W. The Coinage and Mints of Phoenicia: The Pre-Alexandrine Period. Harvard. (1982)

Elayi, Alain, M. Blet-Lemarquand and J. Elayi. “Fluctuations in the Composition of the Silver Coinage of Byblos (5th–4th Century BC)”, American Journal of Numismatics 24 (2012)