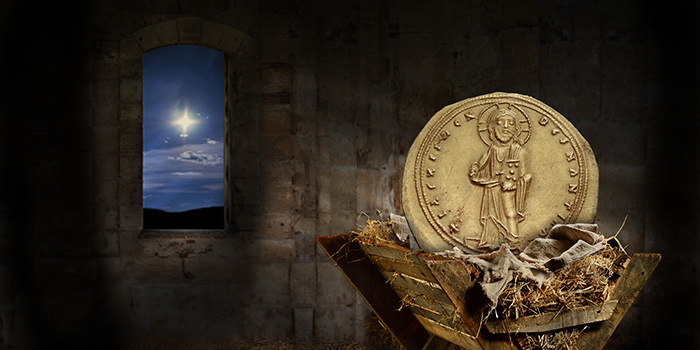 As with politicians, nothing is more important to gods than image … Perhaps this is the secret of the longevity of the God of Israel, that He never allowed an image of Himself[1].

THE OLD TESTAMENT’S strict prohibition of idolatry inhibited the development of religious art in the early centuries of Christianity[2]. Although Theodosius I (ruled 379-95 CE) made Christianity the official state religion of the empire[3], familiar pagan imagery persisted for another century on the coinage. Money truly is conservative! Nike, the winged goddess of Victory, a common reverse type, was gradually transformed into an angel holding a cross[4].

On July 28, 450, Emperor Theodosius II fell from his horse and died without a successor. His powerful sister Pulcheria, who had taken a lifelong vow of chastity, quickly arranged a political marriage with Marcian, a military commander, to ensure an orderly succession to the throne. It was customary to issue special ceremonial coins for imperial weddings, bearing the reverse Latin inscription FELICITER NUBTIIS (“Happily Married”). Distributed as party favors at the wedding banquet, they were often mounted in jewelry and treasured as keepsakes for generations. One damaged example of the gold marriage solidus for Marcian and Pulcheria survives, in a museum in Glasgow, Scotland. Neither the bride nor the groom had a living father to preside over the ceremony, so the palace official who commissioned the design of the coin had the engraver place the standing figure of Christ between Marcian and Pulcheria.

Forty-one years later, the same situation arose when Emperor Zeno died without an heir. His widow Ariadne quickly married a court official, Anastasius, aged about 60. Only two examples of the wedding solidus are known (one at Dumbarton Oaks, one in a private collection). Again, the haloed figure of Christ appears between the bride and groom, joining their hands in matrimony. Such tiny figures on rare ceremonial coins, intended for use only within the imperial court, were hardly a major influence on the iconography of the coinage. But they established a precedent for depicting Christ as a man, at a time when He was commonly represented as the Lamb, or simply symbolized by the Cross. Justinian II came to the throne in 685 at the age of 16. Heraclius, who ruled 610-41, was his great-great grandfather. His early coinage was conventional, bearing his portrait (often beautifully executed by a talented master engraver) on the obverse and a cross on steps reverse. But in 692 he introduced an extraordinary innovation: placing a bearded, long-haired portrait of Christ on the obverse, with the Latin inscription “Jesus Christ, King of Those Who Reign” (IHS CRISTOS REX REGNANTIUM).

This image, often described as Christ Pantocrator (“Ruler of all things”) ultimately derives from the gold and ivory statue of Zeus in the temple at Olympia, created by the sculptor Phidias circa 435 BCE[5]. The reverse depicts the standing figure of the emperor with the inscription “Justinian Servant of Christ”.

This remarkable change in the coinage may have been a gesture of defiance toward the Muslims, who recognized Jesus as a prophet, but rejected His divinity. Examples of this famous coin, even if poorly struck and off-center, are in high demand. High-quality specimens typically bring $5,000 or more at auction[6]. On Harlan Berk’s list of the 100 Greatest Ancient Coins, this type is #77 (Berk, 114). Fractional denominations were struck with the same design (the semissis worth half a solidus and the tremissis worth a third) but are quite scarce.

Overthrown in a palace coup in 695, Justinian’s nose was mutilated and he was exiled to a remote outpost in the Crimea. Mutilation was considered more humane than execution since it supposedly rendered the victim permanently ineligible for the throne. In exile, Justinian has his nose repaired by an itinerant surgeon[7], formed an alliance with the pagan Bulgars, married a princess of the pagan Khazars, and plotted his return to power, which he accomplished in 705. Justinian’s second reign was a reign of terror, during which he took ferocious vengeance on his opponents.

There was another dramatic change in the coinage, for reasons unknown.

A new portrait of Christ, with short curly hair and a short beard appeared on the obverse[8]. This “Syrian” image was said to derive from a portrait painted from life by the apostle Luke. The reverse bears Justinian’s face (with a perfectly normal-looking nose) and a new Latin inscription: “Justinian, Many Years”. Shortly afterward, Justinian added the image of his young son Tiberius to the reverse; between them they hold a cross[9]. Both types of Justinian’s second reign solidus are scarce, but being in less demand they are somewhat more affordable. On Berk’s list of the 100 greatest ancient coins, this is #93 (Berk, 115).

Overthrown by a military coup on November 4, 711, Justinian and his son were executed. The coinage returned to the conventional cross-on-steps reverse for over a century, during the period of the “Iconoclast Controversy”.

When the last Iconoclast ruler, Theophilus, died (January 20, 842) his widow Theodora restored the image of Christ to the coinage. Coins issued in her name as regent for her son Michael III are extremely rare, but they bear the image of Christ Pantocrator, closely copied from the solidus of Justinian II’s first reign but inscribed in Greek (the use of Latin had gradually died out at Constantinople)[10]. After Theodora was deposed, the coins of Michael III continued the same obverse design[11].

Basil I “the Macedonian” came to the throne in 867 by murdering his friend and benefactor Michael III (politics was a rough game in Constantinople). On his common gold coinage, Basil placed an image of Christ enthroned, with the familiar “Rex Regnantium” inscription[12]. This may copy a mosaic above the throne in the imperial palace, restored after it was plastered over by the Iconoclasts. Composed of simple geometric forms, the crude image is remarkably awkward, even for this era of sharply declining artistic standards. For the next two centuries, variations on this image would alternate with the haloed head of Christ as the standard obverse on Byzantine coinage.

Theodora, the last survivor of the Macedonian dynasty founded by Basil I, ruled briefly in her own name from January 1055 to her death in August 1056[13]. The beautifully executed coinage of this reign introduced a full length standing figure of Christ. This image may be the icon called Christ Chalkites, which stood above the main entrance of the imperial palace. On the reverse, the empress stands beside the Virgin Mary[14].

A very different image of a beardless youthful Christ, holding a scroll and raising His right hand in benediction, was introduced on the gold hyperpyron of Manuel Komnenos, who ruled 1143-1180. The inscription is an abbreviated Greek invocation to the Virgin for help[15]. Some observers have noticed a striking similarity between this icon, known as Christ Emmanuel, and depictions of the Buddha.

In 1261, Michael VIII Palaeologos recaptured Constantinople from the “Latins”, who had held it since 1204. On the reverse of his gold hyperpyron, there is a complex scene of the emperor kneeling before the standing figure of Christ, while his namesake, the Archangel Michael, hovers in the background. Most surviving examples of this type are poorly struck, from badly worn dies and with deep edge cracks. An exceptional example brought $4,750 in a recent auction[16].

The last coinage in the name of a Roman emperor was struck during the final siege of Constantinople in 1453. The obverse image of Christ is reduced to a few tentative strokes and dots, scarcely recognizable as a face.

…[T]the present coin is illustrative of how far the empire had fallen. Its fabric is crude, struck on recycled silver from church altar vessels in order to pay mercenaries, and the quality of the artistry no better than the worst barbaric imitative issues of the migration period, yet the historical importance of these extremely rare coins cannot be overstated[17].

Beginning in the 13th century, the rising Italian commercial powers of Florence and Venice introduced a gold coinage that would become the standard of world trade for centuries[18]. The Venetian silver grosso bore an image of Christ enthroned, closely copied from Byzantine iconography. The gold ducato of Venice, which retained the same design down to the end of the Venetian republic in 1797, bore the standing figure of Christ (remarkably similar to that on Theodora’s coin of 1056) in an almond-shaped frame (mandorla) filled with stars[19].

[3] The “Edict of Thessalonica” (27 February 380) ordered all subjects of the empire to profess the faith of the bishops of Rome and Alexandria.

[5] https://en.wikipedia.org/wiki/Statue_of_Zeus_at_Olympia. This statue appears on a number of ancient coins, notably an Antioch aureus of Licinius, c. 321-322 CE, RIC 33.

[13] “Theodora” is a very common name in Byzantine history. This one is often distinguished as Theodora Porphyrogenita (“born in the purple”).

–. Catalog of the Byzantine Coins in the Dumbarton Oaks Collection: Vol. 3, Part 1. Washington (1973)

Mathews, Thomas. The Clash of Gods: A Reinterpretation of Early Christian Art. Princeton (1993)