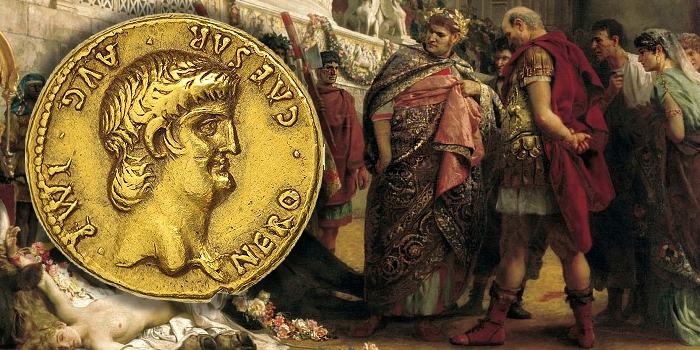 Within numismatics, there is one general topic that I like the most and that is ancient coins. In particular, Roman coins.

It doesn’t matter to me if I have to talk about coins from the early Republic or about coins minted at the end of the Empire. In this article, I want to talk about one of the most famous emperors of the Roman Empire (or at least for most people in the modern world) – Emperor Nero.

Nero leaves a lot to the imagination for a lot of people nowadays. Why? Because he’s famous for his failing policies, crazy behavior and possibly for setting Rome on fire. Of course, this blog is about Emperor Nero. The Childhood of Nero

Nero was born in Antium on the west coast of Italy. The emperor Caligula was also born there. Nero was the son of Gnaeus Domitius Ahenobarbus and Agrippina the Younger. The latter was the sister of Caligula. Due to his maternal family line, Nero was the great-great-grandson of the first emperor of Rome: Augustus. This helped him later to legitimate his position as emperor. Nero became emperor of Rome in 50 CE due to the influences his mother had on her then-husband, the emperor Claudius.

Nero’s mother persuaded Claudius to adopt the boy, and he did. After the death of Claudius, who died of poisoning (possibly directly or indirectly by Agrippina), Nero was the only legitimate heir to the throne and he thus became emperor at the age of 16.

In his first years, he was guided by his mother and his tutor, the famous writer and philosopher Seneca. After he killed his mother in 59 CE, Nero’s policies started to change. Why he killed her is uncertain but possibly he no longer wanted to play second fiddle to his own mother (pun intended).

After the death of Aggripina, the decline of his rule became assured. He was no longer interested in the ‘’normal’’ duties of his office and spent almost all his time indulging in his hobbies of art, music, and theatre.

The decisions that Nero made were oftentimes bad and were doomed to fail. The most absurd thing he did was “preside” over a fire in a large portion of Rome. Because of his wicked actions, policies, and immoral leadership, some revolts occurred in the Roman Empire in 68. Due to these events the Senate wanted to dismiss him as emperor. But before they could arrest him, Nero killed himself by stabbing himself in the throat. His last words are said to have been “Qualis artifex pereo”, which means “What an artist is lost!” 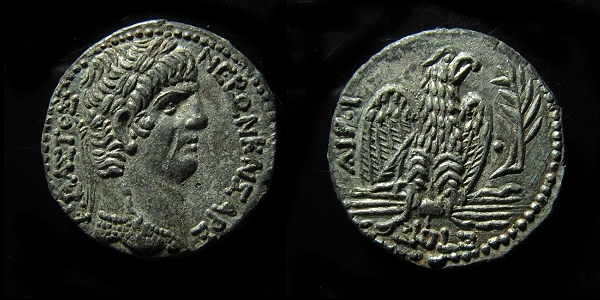 MA-Shops has a lot of coins in their database from Nero. In all qualities, denominations, and prices. So if you are looking for a coin from the famous emperor Nero you will definitely see a coin that you like in their database.

For example this great aureus below. This aureus is certificated by NGC in the quality AU(50-53). This aureus has on the obverse the head of Nero in a high-relief and the text NERO CAESAR AVG IMP. The portrait of this coin is a real piece of art. On the reverse, you can see Roma, the deity who was a personification of the City of Rome. She is usually illustrated on coins with a helmet and military items, as on the aureus. The text on the reverse is, PONTIF MAX TR P X COS IIII P P. These were the titles from the emperor. This coin will absolutely be a jewel in your collection.

The Influence of His Mother Agrippina

Another example is this tetradrachm that was minted in Pieria Antioch and Orontes. This coin was minted in 56/57 CE. This coin shows perfectly the power of the mother of Nero, Agrippina. It was not common that a woman was depicted on a coin; in fact, she was one of the first women who appeared on coins in Rome. She must have had a lot of power because she could break the coin tradition. MA-Shops is an internet marketplace headquartered in Europe. MA-Shops has assembled a network of reputable coin dealers – both large and small – onto one, easy-to-use platform to sell coins, paper currency, banknotes, medals, military orders and stamps directly to the collector. Founded by German engineer Joachim Schwiening in 2005, MA- Shops is now the leading ”online collector mall” worldwide. Browsing through the site quickly reveals how wide and variegated the selection from MA-Shops and its associated dealers really is. In recent months, Schwiening and MA-Shops have made a concerted push into the American market.