Last month, I wrote about coins bearing the likeness of the Roman god Jupiter.

This month, I want to browse MA-Shops and pick out the most interesting coins that bear the likeness of the Roman god Mars.  I was impressed by several aurei and by some other coins I found. In this piece, I will discuss who the god Mars is and I will discuss some coins with Mars on it.

Most people have heard of the god Mars, but don’t know his full story. A book can be written about his nature, his representations in the Roman arts, and everything else that is associated with him. Because there is no space for that in this blog, I will give you a short overview of all of this.

Mars was the Greek equivalent of the god Ares, the Greek god of the art of war. Mars also had some functions in agriculture. In this respect, the Romans likely saw him as the securer of peace, rather than the brutal destroyer of the other folks.

The festivals, which were related to him, were mostly held within the month Martius (March), which was named after the god Mars. Mars was the son of Juno and probably also from Jupiter. There is some controversy as to whether Jupiter is the father, but it is possible that he only had a mother, according to myth. Most of the time, Mars is depicted with war-related items, such as a helmet and a spear. This beautiful aureus of Aurelianus shows a classical Mars. Here we see a young, naked, and a so-called fresh Mars. Here he is wearing a helmet and is holding a spear and a trophy. This all refers, of course, towards his nature, war. Beneath his feet, a captive is seated. This refers towards someone who is conquered by war. This coin is of an outstanding quality and is a pure gem. I think I’ve never seen an aureus of Aurelianus of this quality before. From the famous Corsica hoard.

Another part of the hoard was found in the mid-1980s, again, in the Gulf of Lava. It may be the case that the hoard was buried on land, as part of it found there. The remainder may have found its way into the gulf after an earthquake caused a landslide in the location the coins where the coins were buried.

Whatever the explanation, this is a superb coin from a major hoard.

That Mars was an important god is clear by the fact that he is depicted on a lot of denarii in struck in the middle and late republic.

Most of the time during this period, only his head is shown. In this aureus, Mars is depicted as an older man with facial hair. On other coins of the period, Mars is also depicted in his younger form. It seems that most people of the time did not care too much about the shift in Martian iconography. 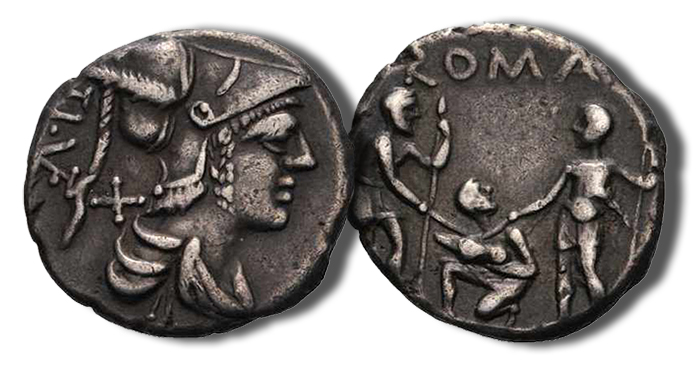 Splendid specimen with handsome lustrous toning. The fighting-scene alludes to the bravery shown by Thermus` namesake during the war against the Ligurians in 193 BC.

Visit the website and search for more Mars coins in this category.