The coinage of Nero spans his reigns as Caesar and emperor

Nero is among the best-known of all Roman emperors – but not for good reasons. During his eventful reign, from 54 to 68 CE, Nero had relatively few accomplishments, yet is credited with a long list of failures. The fact that he ruled so long is no testament to his competency but rather to the strength of the dynastic formula of the Julio-Claudians, who under five emperors ruled the Roman world for nearly a century.

A gold aureus with Jupiter on its reverse. All images courtesy of Classical Numismatic Group (CNG) and Nomos

The same, except a silver denarius

During his unstable reign, Nero lost popularity due to his desire to indulge his artistic side by performing publicly as an actor, poet and singer. He also took an expensive tour of Greece in 67 to satisfy his interests in Greek culture – he even participated in the four famous athletic contests: the Isthmian, Pythian, Nemean and Olympic Games. Not surprisingly, he won many of the contests in which he entered. In the Olympic Games he even won the chariot race, despite his falling from the chariot in mid-course.

He also was credited (rightly or wrongly) with causing a great fire in which much of the city of Rome was burned to the ground. The prevailing belief was that he had done so to clear prime land to build his ‘golden palace’.

Eventually, in 68, a rebellion was launched in the provinces of Gaul, Spain, Germany and North Africa. These gained momentum, and Nero was unable to oppose it. With his rivals’ armies marching on the capital, on June 9, 68, Nero tried to commit suicide before execution at the hand of soldiers who had forced their way into his villa outside Rome.

A silver denarius as Caesar with a childlike portrait

A gold aureus with a youthful portrait

A brass sestertius with a mature portrait

The coinage of Nero is nearly as interesting as the history of his reign. Since his first coins were struck while he was still a minor, and his last came off the dies when he was a 31-year-old man, we can observe on them Nero’s physical maturation.

Nero’s earliest coins were struck when he held the title Caesar as the adopted son of the reigning emperor Claudius (41 to 54 CE). Below is a gold aureus struck bearing a childlike portrait of Nero; it was struck in the period 50 to 54, when he held the rank of Caesar. Below is a silver tetradrachm of Antioch in Syria which shows the heads of Claudius (as emperor) and Nero (as Caesar).

Issued after he became emperor, the silver denarius below shows a youthful Nero, before he became heavy and grew a beard.

Later in his life, Nero issued coins that honored the memory of Claudius, who the senate had declared a god upon his death in 54. Below is a silver didrachm of Caesarea in Cappadocia portraying Nero, as emperor, and Divus Claudius.

During the early period of his reign, after Claudius had died, Nero was still considered too young to rule alone. Therefore, his mother, Agrippina Junior, who had been Claudius’ final wife (despite also being his niece!), assumed oversight until Nero grew older. Below are two coins from that period of joint rule.

Below is a silver denarius of late 54 showing Nero and his mother with their busts confronted. 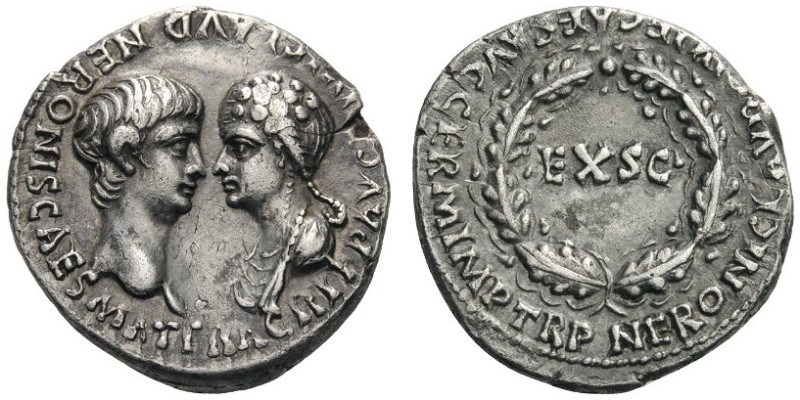 The following silver denarius of 55 shows Nero and his mother with their busts jugate, and on the reverse an elephant-drawn cart bearing statues of Divus Augustus and Divus Claudius.

One of the hurdles young Nero had to overcome once being hailed emperor was his younger step-brother Britannicus, who was the natural son of Claudius from an earlier marriage. Britannicus survived in the palace just four months under Nero before he was poisoned. Below is a bronze provincial coin from Sinope in Paphlagonia that portrays both youngsters.

Among the most collectible of all Nero’s coins are those struck in the provinces. The variety of this coinage is remarkable; below is a small selection of such pieces.

A bronze of 17 mm (issued as Caesar) from Hierapolis in Phrygia. A silver tetradrachm of Antioch in Syria.

A billon tetradrachm of Alexandria in Egypt.

A silver hemidrachm of Caesarea in Cappadocia.

And finally, a copper tetrassarion of the Koinon of Thessaly.