The 1877 fifty dollar patterns, named half unions, were struck in both Large and Small Head varieties, both types using a common reverse. One specimen of each design was struck in gold (Judd-1546 and Judd-1548) and a small number of copper examples of each design were also produced (Judd-1547 and Judd-1549). Some of the copper coins, including the Small Head Judd-1549 specimen Heritage will be offering in the 2014 September 4 – 6 Long Beach Expo US Coins Signature Auction in Long Beach, were gilt, but it is not clear if this was done at the Mint or later.

The idea for the $100 union and $50 half union gold coinage originated during the California Gold Rush in the 1850s. By the time the San Francisco Mint opened in 1854, most of the familiar Assay Office fifty dollar slugs (struck with semi-official status in 1851 and 1852) had either been exported to pay off large transactions or turned in to be melted for smaller denomination coins that were more convenient for everyday purchases. Since paper money was nonexistent in the California economy during the Gold Rush era, the need for larger denomination gold coins was keenly felt by merchants and bankers who conducted large transactions in the course of their business. These businessmen petitioned Senator William Gwin and Secretary of the Treasury James Guthrie to authorize the striking of fifty dollar gold coins of the same shape and fineness as the United States double eagle.

Gwin introduced a bill to provide for the minting of large denomination gold coinage. The bill passed in the Senate on June 16, 1854, but it failed in the House. The private San Francisco firm of Wass, Molitor & Co. struck large numbers of fifty dollar gold pieces in 1855 to serve the purpose the half unions were intended for and the large gold coins were never officially issued by the United States.

Many years later, in 1877, the half union patterns were struck at the Philadelphia Mint during the directorship of Henry Richard Linderman. Linderman was a clerk at the Mint in 1855, and may have remembered the half union proposal from his early days in government service. He had many patterns struck for unofficial reasons during his later terms as Mint Director and formed a spectacular collection of his own, mostly of pattern and restrike issues. The half unions were apparently a “pet project” of Linderman’s, according to the editor of the 10th edition of the Judd reference, as there was no pressing need for the large gold coins in 1877.

Impressions from the dies for the half union were reportedly sent to Linderman on August 30, 1877, so the patterns must have been struck in late August. The two gold half unions weigh 1289.1 and 1287.3 grains respectively, in line with the specifications outlined in Gwin’s 1854 bill. Mint correspondence of the time indicates that Mint personnel feared such large gold coins would be especially vulnerable to rim filing and being hollowed out and filled by base metal, such as lead. The project was soon abandoned as impractical, and the copper patterns were clandestinely marketed to favored collectors. 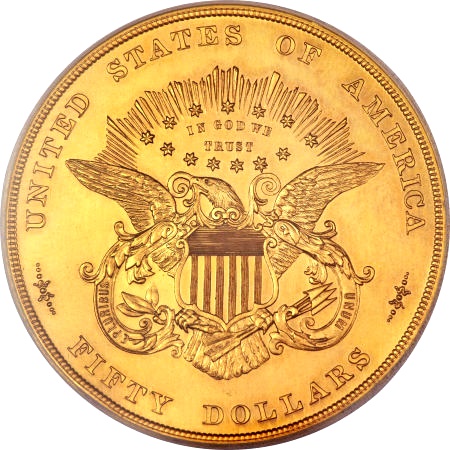 Chief Coiner A. Louden Snowden acquired the two gold half unions, which were supposed to be melted, by paying the Mint Director the bullion value and a charge for pattern pieces. He later sold these coins to William Woodin, future Secretary of the Treasury, with coin dealer John W. Haseltine acting as intermediary. A scandal ensued when the transaction was made public and a complicated series of legal maneuvers and under-the-table deals resulted in Woodin returning the half unions in exchange for a treasure trove of other patterns, presumably also acquired by Snowden during his tenure as Chief Coiner, and later Superintendent, at the Philadelphia Mint.

The gold half unions are safely ensconced in the National Numismatic Collection at the Smithsonian Institution today. USPatterns.com suggests fewer than a dozen examples of Judd-1549 survive today, with one specimen in the Smithsonian and another in the Connecticut State Library. About half the known specimens are gilt.

The coin was once a part of the fabulous collection of King Farouk of Egypt. When his government was overthrown in a military coup in the early 1950s, his collections were sold in a series of auctions that were a sensation at the time and still resonate today. Lot 2019 of the Palace Collections of Egypt (Sotheby’s, 2/1954) contained both this coin and an example of Judd-1547, the Large Head half union in copper. The lot sold to U.S. collector Robert Schermerhorn, one of the few Americans to attend the sale in Cairo. This piece was later offered in lot 1352 of the 1979 ANA Auction by one of our predecessor companies, New England Rare Coin Auctions, passing through a few unknown intermediaries to our present consignor.

At two inches in diameter and 1/8 of an inch thick, the size of this marvelous coin is truly majestic. The star and letter punches are from the set used on double eagles, and they are dwarfed by the extensive fields of the half union, appearing quite tiny around the peripheries. The design elements exhibit razor-sharp definition throughout, and the well-preserved surfaces are smooth and evenly colored. Like most gilt coins, the luster is a little flat and matte-like, rather than vibrant. The gold plating has worn thin in a few spots on the rim, and there is a small smudge in the left obverse field. Two tiny lintmarks, one touching Liberty’s curls about level with star 3, and another touching the curl slightly above star 1, act as pedigree markers. Eye appeal is tremendous.

Beautifully preserved and rarely offered, this lot represents an important opportunity for the advanced pattern specialist.