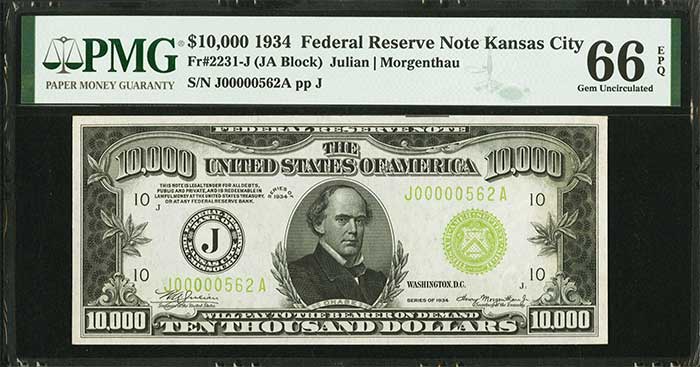 A 1934 U.S. banknote set the world record for the most valuable type of its kind sold at auction when it brought $384,000 USD at Heritage Auctions. The $10,000 bill sets the ceiling on the most valuable “small size” piece of currency ever sold.

“This is easily the best of its kind I have ever seen,” said Dustin Johnston, Director of U.S. Currency at Heritage Auctions, which sold the note Friday evening, September 18, as part of a five-day event. “This is the finest example ever offered of a perennial trophy note and we were pleased to offer it at auction.”

The note is one of just three $10,000 bills to survive in such remarkable condition, according to Paper Money Guaranty (PMG), which graded the note. It is one of just eight surviving 1934 Kansas City $10,000s, serial number 562 of only 1,200 examples originally printed. This was the smallest print run by any U.S. Mint district for this series.

In 1928, the Bureau of Engraving and Printing (BEP) reduced the size of United States banknotes to the current “small size” of 156mm by 66mm in order to save money on printing costs. This colorful note’s shocking face value of $10,000 makes it especially desirable among collectors. Notes of this denomination were printed only for exchange between banks. They were not put into circulation for the general public.