One of the most prolific and famous artists of the 20th century, Pablo Picasso’s artwork is instantly recognizable for its distinctive surrealist and cubist tendencies. Inevitably, like all artists whose works spanned multiple decades, Picasso’s style changed over time. In the early 1940s, Picasso began an affair with the painter Francoise Gilot, whose presence in combination with the European post-war recovery inspired a renaissance in his artwork.

In partnership with Roque, Picasso began focusing more heavily on ceramics and began incorporating ever-increasing influences from historic artists. By 1955, his partnership with the famed goldsmith François Hugo was in full swing and the two men began work on a series of four compotiers: Compotier rond (Round platter), Compotier ovale (Oval platter), Compotier poisson (Fish platter), and Compotier trèfle (Clover platter). These silver and gold serving platters featured a mix of abstract designs, faces, and animals all formed through the process of repoussé. Several of these designs were also employed on various earthenware plates. Each medallion is stamped on the reverse with the artist’s signature and the François Hugo reference and edition number, as well as the hallmark and assay mark on the chain ring.

The 15 beautiful gold medallions sold on Wednesday, March 9 by Bonham’s as Lot 36 in the Gail Feingarten Oppenheimer Collection, are based on scaled-down designs originally created for the compotier. While the compotier designs were originally created in the late 1950s, it wasn’t until 1967 that Picasso adapted them to fit a smaller medallic canvas. While Picasso later gave François permission to sell these medallions on the public market, they were practically unknown to the art collecting world, perhaps because he intended to keep them himself or give them to friends and family.

In fact, as the famed art historian Douglas Cooper stated when discussing the medallions, “their existence was wrapped in secrecy, Picasso repeatedly refused to loan any of them to an exhibition and, although he was full of admiration for the results achieved … he concealed them from view when visitors were around as though they constituted some private treasure.”

Each medallion was packaged by the Ateliers Hugo in its own simple wooden presentation box and come with an Atelier Hugo Certificate of Authenticity. The provenance for these medallions only adds to their unique artistic and historic value. Created by the Atelier François and Pierre Hugo in the small southern French city of Aix-en-Provence, they were eventually sold to the Feingarten Galleries in Beverly Hills, California. The medallions were then bought directly from the Feingarten Gallery by Gail Feingarten Oppenheimer of Beverly Hills, who later passed them to the present owners at the time of her passing in 2021.

A total of 22 medallions were cast, each with 20 standard editions and two artist Proofs. As such, original examples are extremely rare. In fact, Picasso only made a very limited amount of jewelry, preferring instead to work in larger formats such as painting and sculpture. Due to their scarcity and connection to Picasso, examples are highly sought after whenever they come to market. 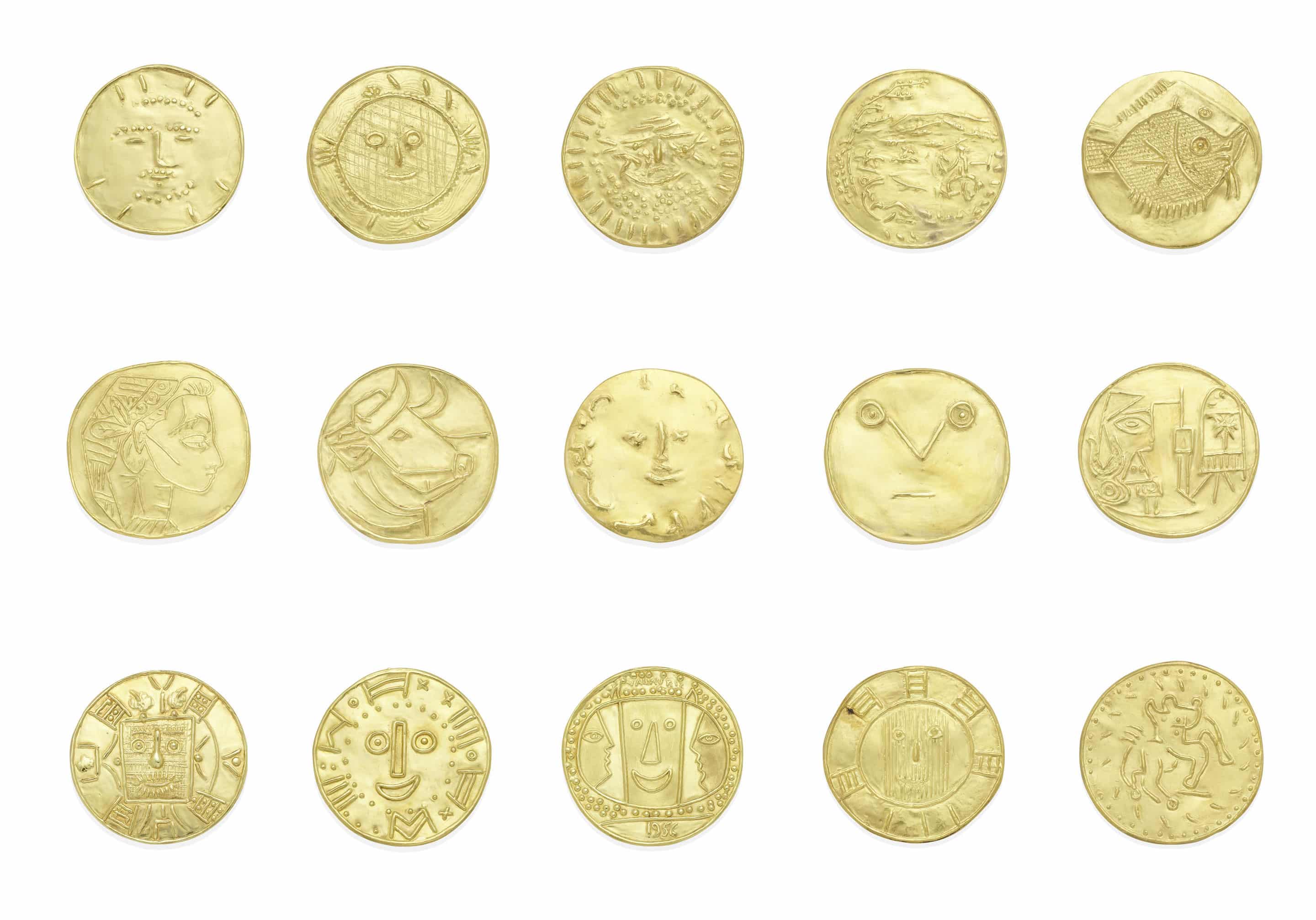 Each uniface medallion is distinct, with its one name and unique design. Their descriptions starting in the top left corner are: