The first of more than 1,200 original dies and hubs cut by satirist and engraver Karl Xaver Goetz, one of Germany’s most prolific medal artists of the 20st century, will be offered without reserve beginning April 17-22 at Heritage Auctions’ World & Ancient Coin Signature® Auction during the Chicago International Coin Fair (CICF).

Goetz is perhaps best known for engraving the famous 1915 Lusitania medallion commemorating the sinking of the British ocean liner by German torpedoes. His medals later gained notoriety through their artistry and biting criticism of war, with often controversial and polarizing results. 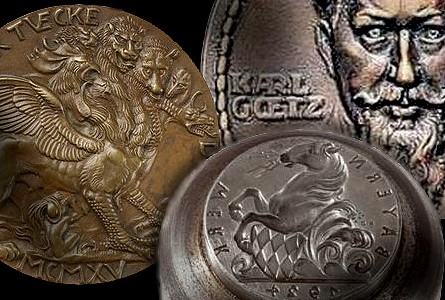 As a member of the Munich Artists Society, The Numismatic Society, and The Austrian Association for Numismatics in Vienna, Goetz medal artistry was known worldwide. Many of his works are still on display at the Kaiser Friedrich Museum in Berlin, among others. The first selection of dies offered by Heritage will features those crafted for both government and commissioned works, including the die used by Goetz to famously promote anti-black sentiment in the 1920s. His “The Watch on the Rhine” aka “The Black Shame” medal is infamous for using racial overtones to protest black colonial French troops.

“The dies and hubs will be offered in order as they appear in Gunter W. Kienast’s opus ‘The Medals of Karl Goetz,’” said Cristiano Bierrenbach, Executive Vice President of International Numismatics for Heritage. “Goetz’ remarkable dies are a testament to his talent as well as the important, yet tumultuous, events during which he cultivated his fans and critics.”

The entire collection will be offered in three parts: The first, April, 17-22, 2013 during Heritage’s World and Ancient Coins Signature® Auction at CICF in Chicago. Future selections will be offered again in September 2013 with the final selection offered in April 2014.