One of the largest and most complete collections of Waterloo Medals to come to auction in recent years is expected to raise a total of over £150,000 at specialist London auctioneers Morton & Eden. The sale of British, Russian, and World Orders, Medals and Decorations in association with Sotheby’s is on Thursday May 31. 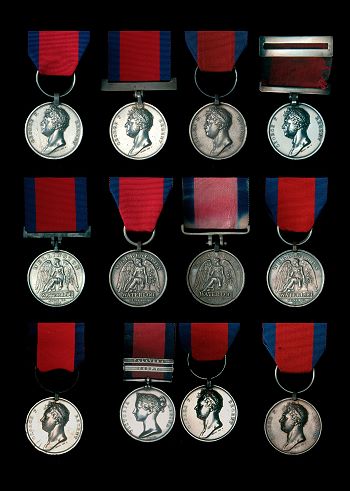 awarded to each of the units who qualified to receive it – 42 British Regiments, the King’s German Legion, Artillery and Corps. All were under the command of the Duke of Wellington at the Battle of Waterloo in June, 1815.

The Waterloo Medal has the distinction of being the first British campaign medal awarded to all soldiers present. It was also the first on which the recipient’s name was impressed around the edge. Consequently each medal in the collection is unique and can be checked and verified against army rolls, revealing some fascinating anecdotes.

They will be sold individually or, where appropriate, with associated medals awarded to the same recipient, with estimates ranging from £1,500 to as much as £8,000 for examples with particularly heroic or notable provenance. The collection recalls the bloody end of Napoleon’s final bid for power, in which the Allies lost 55,000 men and French 60,000, prompting Wellington to remark ‘Nothing save a battle lost is so terrible as a battle won’.

Among the most valuable is that awarded to Troop Serjeant Major James Stride, who gave up his horse to Henry Paget, Lord Uxbridge. In the heat of battle a cannonball struck Paget’s knee, leading to his famous observation ‘By God, sir, I’ve lost my leg!’ to which the Duke of Wellington replied ‘By God, sir, so you have!’

Stride was born in Ringwood, Hampshire, and enlisted in the 26th Light Dragoons at Maidstone, Kent. In early 1801 he was with the regiment when they sailed without their horses from Lisbon to Egypt, seeing dismounted service in Captain Turner’s Troop at the Battle of Alexandria in 1801. Shortly afterwards the regiment was renumbered, becoming the 23rd Light Dragoons.

On 28 July 1809, Stride rode with Captain Loftus’s Troop at the Battle of Talavera, where the 23rd Light Dragoons made their famous charge against three lines of enemy cavalry.

In the Waterloo Campaign of 1815, Stride was Troop Sergeant-Major of Captain P.L. Cox’s Troop. On 16 June the 23rd were rushed up from Brussels to Quatre Bras and during the following day they were involved in covering the retreat of Allied troops.

At Waterloo itself they were positioned in the rear of Halkett’s 5th Infantry Brigade, making several important charges with a high degree of ‘steadiness and determined bravery’. In the evening, as the Allied advance began, Lord Uxbridge rode up to the 23rd’s Commander, Major Latour, requesting a troop horse to replace his own spent mount. Latour complied ‘by dismounting Sergeant-Major Stride, giving his Lordship the Sergeant-Major’s mare.’

Following the disbandment of the 23rd in 1818 Stride, whose duration of service covered all but three years of the regiment’s existence, was discharged as being of poor health and asthmatic.

His Waterloo Medal will be sold with his Military General Service medal of 1848 with clasps for Egypt and Talavera (estimate £6,000-8,000).

Carrying the same estimate and also to be sold with the Military General Service medal, this one with clasps for Albuhera, Vittoria, Orthes and Toulouse, is the medal awarded to Troop Serjeant Major Edward Wells of the 13th Regiment Light Dragoons, who served in the Peninsula from February 1810 until the end of the war, being wounded at the Campo Mayor cavalry engagement in 1811.

At Waterloo, Wells assumed command of his troop following the loss of all its officers and was injured himself before the day was out, sustaining a broken leg. Promoted Ensign in the 2nd West India Regiment in 1816 and to Lieutenant in 1826, Wells exchanged to the 54th Foot and became Captain in 1836. He quitted the service in 1841.

Estimated to sell for £4,000-6,000 is the Waterloo Medal awarded to Serjeant Benjamin Detheridge of the 2nd Battalion, 30th Regiment of Foot who spent eight years as a prisoner of war.

Detheridge was born in Dudley, Worcestershire, where he enlisted at the age of 18 in June 1799. He was captured in December 1805 when the transport ship Jenny was driven ashore by a gale near Gravelines, east of Calais. 103 men and four officers were sent to Verdun where they were held until the Peace of 1814.

During almost eight years of captivity the prisoners survived mainly on horsemeat. Some died and a few escaped but 63 rejoined the army in time to fight at Waterloo. Sergeant Detheridge was wounded twice during the battle, in the right arm and right leg, and as a result of his injuries, he was discharged in May, 1817 at Fermoy.

The same estimate is given to medals awarded to Serjeant Robert Fisher of the 3rd Battalion, 14th Regiment of Foot, a Waterloo veteran who went on to fight a second campaign in India and was present at the storming of Bhurtpoor in 1826. However, by then he had been reduced to the rank of Private. His Waterloo Medal will be sold together with his Army of India Medal 1799-1826 with clasp for Bhurtpoor.

Private William Lind’s service with the 1st Battalion, 71st Regiment of Foot was less distinguished: following Waterloo he is listed as having deserted in Paris on July 31, 1815. Born in Dungannon, Co. Tyrone, Lind was a weaver by trade. His Waterloo Medal would have been awarded to his next-of-kin – the first time this was done for a campaign medal – but whether or not he was recaptured is not known. His medal is estimated at £2,500-3,000.

Troop Sergeant Major James Russell of the celebrated Scots Greys lost all his kit and his severely wounded horse at Waterloo. Lucky to escape injury himself at Waterloo, he wrote to his wife immediately after the battle and it was in this way that news of the great victory reached Glasgow. Following his discharge in 1821 Russell became a steam boat harbourmaster on the Clyde, surviving to the ripe age of 82. His Waterloo medal is expected to be the most-prized single example, estimated at £6,000-8,000.

The collection will be sold in Sotheby’s Upper Grosvenor Gallery in the Aeolian Hall, Bloomfield Place, off New Bond Street W1. It will be on view at Morton & Eden, 45 Maddox Street, on May 28-30 from 10am-4.30pm or by previous appointment. For further information, please contact James Morton, Paul Wood or Stephen Lloyd, telephone 0207 493 5344 or [email protected]

Picture shows some of the Waterloo Medals in the collection. The two in the centre of the bottom row are the General Service Medal with clasps for Egypt and Talavera and the Waterloo Medal awarded to Troop Serjeant Major James Stride, estimate £6,000-8,000.