The Stack’s Bowers Galleries Official Auction of the Whitman Coin & Collectibles Baltimore Expo featured an array of five-to-six-figure items, together with thousands of collector coins, medals, tokens, and paper money at every budget level. When all was said and done, over $11.8 million was sold during the live floor sessions. 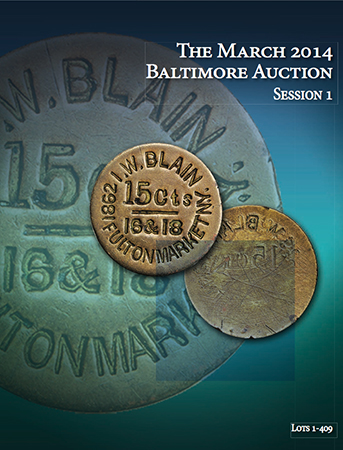 Front-row center was a gold Nobel Peace Prize medal, the subject of widespread media attention leading up to the sale. This example, only the second one ever offered at auction, was awarded to the Argentinean scholar and statesman Carlos Saavedra Lamas. Though estimated conservatively at $50,000 to $100,000, it attracted bidders from around the world before selling to applause in the auction room for a stratospheric $1,116,250.

A very rare original silver “1776” (ca. 1789) Washington Before Boston medal in Choice About Uncirculated grade eclipsed the presale estimate by nearly 200%, bringing an amazing $282,000. A silver 1781 Libertas Americana medal by Augustin Dupré graded MS-62 by PCGS reached six-figure territory with a winning bid of $11,625. A rarely offered Pulitzer Prize medal in gold grading Choice About Uncirculated was hammered at $49,937 against a presale estimate of $15,000. A rare bronze (ca. 1854) Declaration of Independence medal by Charles Cushing Wright, Baker-53, soared to $44,062, bringing in more than its presale estimate of $20,000. A Franklin Pierce Indian Peace medal in silver grading Extremely Fine commanded a winning bid of $30,500—more than twice its presale estimate—and will soon be on display at its new home: the New Hampshire Historical Society. A New York State Chamber of Commerce Rapid Transit Commission medal struck in gold and designed by Tiffany & Co., grading Choice Mint State, fetched an impressive $30,550. A rare 1787 Colombia and Washington medal in Very Fine also exceeded presale expectations with a winning bid of $25,850. Many of these high-end medals were from the extraordinary Charles A. Wharton Collection, which is one of the most remarkable offerings of American medals to cross the auction block in recent times. In fact, the offering was highlighted by the finest presentation of Washingtoniana since our 2006 Norweb Collection sale.

“Tokens and medals were the stars of the first part of the sale,” said Q. David Bowers, chairman emeritus of Stack’s Bowers Galleries. “The action was unbelievable with dynamic floor bidding, a busy bank of telephones, and numerous Internet bidders worldwide. The excitement seems to be increasing every year.” In the federal coinage series, The Cherry Blossom Collection realized nearly $2.7 million, and set several new price records. The 39 coins in this cabinet captured the attention of buyers for weeks leading up to the sale, and buyers delivered record bids for several pieces. In all, nine pieces reached new highs in this sale for their respective issues and grades, including an 1881 Proof gold dollar, 1901 Proof quarter eagle, 1888 Proof three-dollar gold piece, and a 1909 Proof eagle, among others. Other highlights from this collection include an 1879 Flowing Hair Stella graded Proof-65 Deep Cameo by PCGS, which sold for $258,500—the highest price ever for an example in this grade. Another highlight was the 1880 double Eagle graded Proof-66 Ultra Cameo by NGC. This coin realized $235,000—the highest price ever for a Proof Type III Liberty double eagle in this grade. Amongst the rare eagles in the sale, the finest-graded1912 Proof in NGC Proof-68 sold for $117,500—a new record price.

“The atmosphere was electric,” said Christine Karstedt, executive vice president of Stack’s Bowers Galleries. “I was at the sale for three days, from start to finish, and the tempo and enthusiasm were marvelous. The Whitman Expo set records in attendance as well. Clearly, we are all very fortunate to be in the field of rare coins!”

Brian Kendrella, president of Stack’s Bowers Galleries, headed to Hong Kong immediately following the sale to attend the company’s April 2014 Hong Kong Auction. “The action we are seeing is non-stop,” said Kendrella. “Already our next several auctions are successes, based on the incredible incoming consignments. We are certainly looking forward to our Showcase and Rarities Night Auctions of the ANA World’s Fair of Money, for which coins, tokens, medals and paper money are pouring in. We are still taking consignments for this show, and look forward to gaining even more choice properties for this sale.”

Stack’s Bowers Galleries is currently accepting U.S. and consignments for its June 2014 Official Auction of the Whitman Coin & Collectibles Baltimore Expo, and U.S. and world items for its August 2014 World’s Fair of Money Showcase and Rarities Night Auctions. For more information, please call 800.458.4646 (West Coast) or 800.566.2580 (East Coast) to speak to a consignment specialist.