Roman coins in finest quality are offered by the Old Sable Collection, opener of the Gorny & Mosch auction week in October. Apart from that, the range of offer is both interesting and ample in general, whether in regard to ancient, medieval or modern coins.

4,900 lots with a total estimate of 3.6 million euros will be auctioned off in the Gorny & Mosch auction week from the 14th to the 18th October 2013. The highlight comes right at the beginning: the Old Sable Collection is to be liquidated. It contains selected coins of the Romans – form the early aes grave coinage until A. D. 476 when Odoacer deposed Romulus Augustus. As a matter of course, the rest of the first sale, “High-quality ancient coins”, is remarkable as well. On 15th October, in the afternoon, auction sale 216 commences with “Ancient coins and lots”. 17th and 18th October are devoted to the Middle Ages and modern times. Different collections will be called out, great series of Austria and Russia as well as Swedish coins and medals from the possession of Josef Hackl. 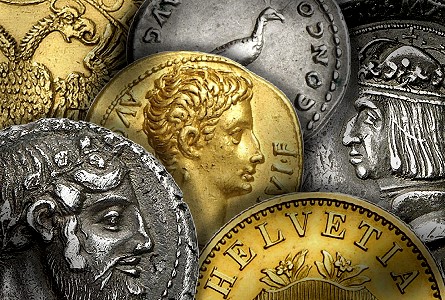 Just paying a look at what a collector had assembled in the Old Sable Collection is a real pleasure. It is clear to see that good style, good condition and nice patina were the decisive criteria here. The Old Sable Collection provides a representative sample, ranging from the early Roman aes grave coinage until the fall of Rome comprising gold coins as well as silver and bronze ones. The scarce coin types and the ones showing the rare emperors and empresses, are offered in an exquisite condition in a number above average.

The collection’s importance, however, does not come from the expensive highlights but the uncompromising quality of the silver and bronze coins, be it of a frequent or a rare emperor. One gains the impression that the collector has spent as much affection on buying his two antoniniani of Numerian (both EF; 80 euros) as on selecting his two antoniniani of Julian of Pannonia (VF; 1,500 euros / EF; 3,000 euros) or his antoninianus of Divus Nigrinianus (EF; 1,500 euros).

Naturally, there are such great rarities present as a unique and unpublished argenteus of Maximianus Herculius in extremely fine with an estimate of 5,000 euros. Or an unpublished argenteus of Severus II as Caesar from Serdica (EF+; estimate: 10,000 euros). Every connoisseur will be pleased about the fantastic diversity of the offer which provides him with the opportunity to place his bid in the two-figure regions already.

Lot no. 664 is the very first one of the traditional selection of “High-quality ancient coins” and the items included here are quite impressive, be it from the Celtic, the Greek, the Roman or the Byzantine area.

45,000 euros reads the pre-sale estimate of one of the famous tetradrachms from Naxos, 30,000 euros of a Syracusan dekadrachm from the workshop of Euainetos; for a very rare didrachm from Thermai Himeraia 30,000 euros are expected and a hemilitron from Lipara with its weight of more than 50 grams and a marvelous malachite-colored patina is likely to achieve 12,000 euros at least. Next in line could be Amphipolis, the Orrescii, a stephanephoric tetradrachm from Syros and, of course, an Egyptian gold oktodrachm with the portrait of Berenice II; anyone loving high-quality coins will find every number of items worth dreaming of (and bidding for) with Gorny & Mosch auction 215.

Likewise the collector of Roman coins is requested to stay even after the Old Sable Collection has already been liquidated. The offer to be sold on 15th October is spectacular. Just take the highlight, the most expensive coin of the auction sale: it is a multiplum of Emperor Constantine the Great of 6 solidi from Nicomedia, issued on the occasion of his 30th throne anniversary. The extremely fine piece is estimated at 150,000 euros.

Half of that sum is expected for an aureus dating to one of the most thrilling eras in world history, minted in 43 B. C. It is possible to date this coin with a tolerance of a couple of months thanks to the titles with which Octavian refers to himself on the obverse.

At this point, we mustn’t forget the aficionados of the Byzantine coinage who will discover some rarities in auction sale 215 as well, like a solidus, struck during the revolt of the Heraclii in Alexandria (VF; 3,500 euros), a solidus of Eirene (EF/EF-FDC; 10,000 euros) and a seal of an oikonomos of the church with the depiction of Maria surrounded by nine emperors revering her on the obverse (VF-EF; 10,000 euros).

He who can’t spend that much money will appreciate catalog 216 of Gorny & Mosch’s where interesting and rare coins can be found frequently which don’t expect you to be a millionaire. Hence, only a very small number of potential buyers is likely to be able to place a bid for the Naxos tetradrachm at all. A Naxos litra dating to c. 460 B. C., whose dies were cut by the famous Aitna Master, in contrast, comes with an estimate of 350 euros which enables most of the collectors present to participate in the bidding fight.

Browsing through catalog 216 carefully, therefore, pays off. The many Greek fractions and rare bronze coins in particular are likely to enchant. In addition, hardly an auction has that much provincial Roman coinage in supply: approximately 100 lots will be auctioned off. The aficionado of Roman coins discovers very rare and intriguing pieces, too. A case in point is a small series of legionary denarii of Marc Antony as part of the Roman Republic section. He who looks for Byzantine bronze coins will hit paydirt with this catalog.

The sale will be concluded by roughly 200 lots with ancient coins, as always reasonably assembled and collector-friendly estimated. These Gorny & Mosch multiple lots have gained something of a cult status. Interested potential buyers come from afar to inspect them first-hand and to place their bids. There is good reason for it, known only to the one who has already occupied himself with these lots.

On 17th and 18th October 2013, auction sale 217 – Coins from medieval and modern times – will be conducted, together with pro aurum Numismatik. The medieval part is listed in a section of its own.

We would like to highlight a series of gold gulden from different mints as well as a number of Hungarian coins. The most remarkable piece is a reale d’oro of Charles I of Anjou from Sicily (VF-EF; 8,500 euros).

Germany is next, containing some rarities, like a double friedrichsdor from 1749 from Berlin with the wardein’s mark A.L.S. for August Ludwig Siemens (EF+; 5,000 euros) and a broad regimentsthaler from Ravensburg, with a mintage of 187 specimens only, which shows a gorgeous cityscape on its obverse (VF; 5,000 euros).

Roughly 150 lots are included in the collection Austria. It covers the range from Duke Sigismund Rich in Coins until the First Republic. The highlights are: a schauguldiner 1516 of Maximilian I (VF; 4,000 euros), a very rare ducat of Ferdinand II from 1636 from Breslau Mint (EF; 3,500 euros), a ducat of Archduke Ferdinand Charles n. y. (1649) from Hall (VF-EF; 10,000 euros) and a konventionsthaler 1848 from Vienna Mint (EF-FDC; 6,000 euros). The Austrian section is concluded by a noteworthy series of multiple lots, coming with remarkably low estimates, which we would like to recommend both to collectors and dealers alike for a close examination.

Josef Hackl is known to many coin collectors. Many publications have become a testament to his affection for Swedish numismatics and his fondness of medals of his Finnish friend Kauko Räsänen. Now, his collection of Swedish coins is to be auctioned off. It has been put together with much expertise and a special preference for Gustav II Adolph. The two pieces that stand out are a gold gnadenpfennig of that very king (VF+; 2,000 euros) and a medal of Dadler and Wulf on the capture of Riga in 1621 (VF-EF; 3,500 euros).

Before we conclude this auction sale preview with Russia, we would like to accentuate some more interesting series of foreign coins. Fans of Netherland coinage will discover an unusual big number of ducats. From the small state of Liechtenstein come a couple of extremely scarce rarities, like a 10 kronen piece from 1900, of which only 1,500 specimens were issued (mint state; 4,000 euros). Neighboring Switzerland is represented as well. Admittedly, with two pieces only which, on the other hand, are all the more rare: that holds true for the 7 ducat piece of the bishop of Chur, Peter II Rascher, 1581-1601 (EF; 10,000 euros) as well as for a pattern of the 20 franks piece from 1871 with ribbed edge (about FDC; 5,000 euros).

A large selection of 130 multiple lots conclude this part of the catalog. Not only foreign coins but likewise German ones will be sold. The cult status that the ancient multiple lots have gained by now is likely to be conveyed to the modern times lots of Gorny & Mosch as well. All conditions are complied with. The lots are assembled reasonably, estimated modestly and exhibit an incredible multiplicity that surely will be an invitation for many collectors to expand their collection.

And that takes us to Russia at last. Roughly 450 lots will be called out, including any number of rarities of which we would like to address only a few here:

Some Highlights Of the Sale: