The market for Russian coins and medals proved to be as robust and vibrant as ever at this years’ Baldwins New York Sale XXV-XXVI at the New York International Numismatic Covention (NYINC).

A combination of high-quality rarities and enthusiastic buyers ensured high prices were achieved for key pieces with the sale totaling just over US$6,000,000 at US$6,008,774 (including buyer’s premium at 17%), up over US$1,000,000 on last years combined sales. Of the 801 bidders that registered to take part in the auction 221 bidders registered participated online across two live bidding platforms and a total of 6.5% of the 1378 lots were sold online to bidders all over the world. 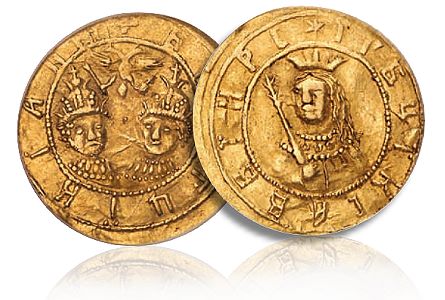 The diversity of the lots on offer attracted buyers from every continent with bidders flying in from Asia, Russia and Europe. Viewing was also well attended with some people simply wanting the chance to see some of the amazingly rare coins for sale. Bidding on both days of the sale seemed focused, with buyers going high in order to secure the most desirable pieces. As in past years, the bidding on the Russian sections was fast and furious with 10 or 20 people trying to bid for lots that were far exceeding estimates. Buyers were intent and selective in their bidding driving prices up in order to secure certain key rarities with exceptional provenance.

The sale commenced with Ancient, leading into Indian and Islamic, coinage which achieved predictably high prices for the top lots offered.

The rarity and artistic beauty of the catalogue cover piece, lot 96, an Electrum Stater of Phocaea, contributed to the lot achieving US$81,900, well over its estimated US$40,000.

Lot 172 in the auction proved to be the most sought-after item with two buyers in the room (one on the phone) forcing the price up from the estimated US$2,500 to a sensational US$117,000. The piece eventually sold on the phone to a private collector, who was obviously extremely keen to secure the piece.

The first day of the auction concluded with a selection of world coins and medals.

The Russian coins that opened the second day of the auction was a most spectacular selection comprising material of the highest quality and rarity, fresh to the market. Lot 1003 [Picutred above]was the first of many of the Russian lots to achieve a result befitting its brilliant pedigree. The gold ducat of Sophia as Regent for Ivan V and Peter I was originally sold in the legendary Hess Hermitage Duplicate auction of 1932, as part of the wider Bolshevik dispersal of nationalized antiques from several palaces of the Russian Tsars and numerous private mansions, through European auction houses. During the 1930s, Hess held two separate auctions on behalf of the Communist Soviet government to dispose of duplicate coins held by state museums to raise funding for Soviet land projects. Many coins were sold through these sales that were not duplicates and, although it is not known if this particular item was one of them, the lot achieved an amazing US$61,425 against its estimate of US$7,500.

Lot 1005, a Peter I gold Ducat was also a standout piece, achieving a staggering US$269,100 against a pre-sale estimate of US$75,000. This particular variety is amongst the rarest of the Petrine Ducat series and it is uncommon to find one in such good condition, having been brilliantly preserved. They are the rarest of coins because they were widely used and so few were retained, this explains why so many specimens are so obviously worn. Lot 1043, a Catherine I 2 Roubles, also attained an exceptional result selling for US$152,100 against a pre-sale estimate of US$50,000. Catherine I only reigned for two years and so there are very few examples of coins that depict her, this particular specimen was one of the highest quality.

Lot 1048, a Peter II gold Ducat, was without a doubt one of the absolute highlights of the sale. The provenance of the coin was astonishing and this was reflected in the realized price of US$234,000 against an estimate of US$75,000. An attempt was made to sell the coin twice at auctions of lots from the collection of the Grand Duke George Mikhailovich, once in 1939 and once in 1950 when Baldwin’s had its first involvement with the coin. The Hess sale in 1939 was scheduled for October 25th in Switzerland but was canceled in the wake of the German invasion of Poland on 1st September 1939. The coin was successfully sold in the 3rd July 1950 auction, held by Christie’s London, which was catalogued for Christie’s by Albert Baldwin, father of the current Chairman, Edward Baldwin. At the time interest in Russian coinage in Europe was minimal and, despite the pedigree of the coins, the entire auction achieved a total of £10,929 with this particular coin selling for £11. Lot 1053,[Pictured at Left] another highlight, has also passed through the hands of Baldwin’s staff before this event. The 1730 Anna gold Ducat was first catalogued by Edward Baldwin for Christie’s, London for their sale of Important Russian Coins and Medals held in 1979. This was the first sale of Russian coins that was catalogued by Edward working as a consultant to Christie’s and it sold for £2,000. It is quite incredible to see this coin being sold 30 years later for US$210,600 in The New York Sale.

A large number of Russian Orders and medals completed the evening’s proceedings.

A selection of medals from the Mooromsky collection produced impressive results; notable amongst them were lots 2010, an Order of St. Vladimir, 2nd Class, Civil Division, sold for US$38,025 against an estimate of US$20,000, and 2034, an Order of St. Stanislaus complete 1st Class set. Civil Division Cross with full-length ribbon and case of issue, which sold for US$25,740 against an estimate of US$15,000. Complementing this collection were a number of orders from other properties including lot 2001, a beautiful example of an Order of the White Eagle Neck badge which achieved US$46,800 against its US$30,000 estimate.

The final section of the 2-day sale consisted of a section of Orders of the Soviet Republics and Orders and Badges of the USSR. Both produced some good results but highlights of the section were lot 2104, a Documented Group of Lieutenant Colonel Lutkevich P.O., estimate US$85,000, which sold for US$117,000 and lot 2174, a Moldova Autonomous Republic Peoples’ Commissariat of Justice badge, estimate: US$15,000, sold for US$25,740.

Seth Freeman of Baldwin’s commented after the auction, ‘We are absolutely delighted at the outstanding success of our two-day sale here in New York. The results speak for themselves and the high prices achieved further cements Baldwin’s standing at the forefront of the global numismatic community.’

Before the appearance of the stater in TRITON, the only known specimen of this issue was the one published first by E. S. G. Robinson, ANS-Centennial Publication (1958), 589, 7 and pl. 39, and owned by such famous collectors as Wéfer (Paris), Ch. Gillet (cf. catalog Kunstfreund / Bank Leu AG, Zurich – Münzen und Medaillen AG, Basel sale Mai 28 [1974], 2), S. Weintraub and N. Bunker Hunt (cf. Sotheby`s, New York – The Nelson Bunker Hunt Collection I, sale June 19 [1990], 55). We owe the attribution to the mint of Phokaia to Robinson, followed by Bodenstedt. For the iconographical and stylistic appreciation of the issue, cf. Kunstfreund p. 9 and Sotheby’s, Hunt I, no. 55.

2034 RUSSIAN ORDERS, MEDALS AND BADGES. ORDER OF ST. STANISLAUS. Complete 1st Class Set. Civil Division. Cross. 62 mm. Gold. Hallmarked 56 (14 K) and kokoshnik marks on loop. ‘ВД’ and ‘ЭДУАРДЪ’ marks on top and lower arms on the reverse. Star: 92 mm. Silver. Kokoshnik and ‘ЭДУАРДЪ’ marks on reverse. Vertical pinback. Comes on a full-length ribbon. In case of issue. Condition: Box: the velvet had been renewed. Decorations – superb and problem-free. From The Walter Alexander Mooromsky Collection. Walter Alexander Mooromsky (1927-2003) was born April 29, 1927, in China, to Russian parents. His father, Alexander Petrovitch Mooromsky, had been born near Penza, south-east of Moscow, at the end of the 19th century. The exact date is a mystery as he lied about his age to get into the Tsar’s Army, and we think gave a different year when he emigrated to San Francisco in 1930. The family considers 1898 to be his birth year. In 1917, he joined the White Army to fight the Bolsheviks. A fervent Monarchist to the day he died, he never believed that any of the Romanov Royal Family escaped the slaughter in July 1918 – having been in the first White Army to reach Ekaterinburg after the Royal Family was murdered and having seen the site. He continued to fight during the Civil War through 1921, serving with pride under General Molchanoff. With the fighting coming to an end, the remnant of the White Army in Eastern Russia realized they needed to leave their beloved Motherland and they walked across the Gobi Desert to escape the Reds. Only a fraction survived this journey. Arriving in Harbin, China, Alexander met Zoya Anoufrovna Rogulsky and they were married there. Their son Vladimir Alexandrovitch was born in Tientsin. As a family they emigrated to California, arriving in San Francisco – Angel Island – in March 1930. At this point, Vladimir Alexandrovitch was renamed Walter Alexander. Walter attended Lowell High School and graduated from the University of California Berkeley!

He served proudly in both the U.S. Navy and the U.S. Army in WWII and Korea. He was a long time employee and executive with Levi Strauss & Co., which moved him to Brussels, Belgium, in 1962 to set up a European marketing and distribution operation. He remained in Brussels for 16 years, having made a second home there. He returned to the U.S. in the early 1980s via a three-year stay in Montreal, Canada. His interests were many, as were his passions and loyalties. He was deeply proud of his Russian heritage, always finding the time to participate in various Russian activities. He carried on his family’s love and honor of Mother Russia and started his collection of Russian orders and decorations while living in Belgium in the 1960s and 1970s. There he had ready access to some of the great auction houses and dealers of Europe, enabling him to build his collection. To him, this collection was about keeping alive the memory and honoring the country of his ancestors. It is his family’s hope that these pieces will continue to do so in the hands of others.