*Order of St Andrew, a large and impressive diamond-set sash badge, probably of European manufacture, in two-colour gold set with rose-cut and single-cut diamonds, ruby eyes and a central gold and blue-enamelled St Andrew’s Cross with an applied figure of the martyred Saint in gold; the reverse entirely decorated with realistic engraved plumage and the hinged crown fitted with gold riband carrier for suspension, 115 x 75.5mm, wt. 128g, some stones missing and others replaced, moderate overall wear, good very fine 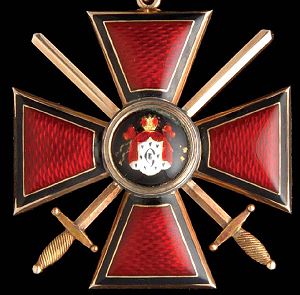 *Order of St Vladimir, Military Division, a large and impressive ‘bulbous’ badge of high quality, in gold and enamels, without marks beneath enamel and with maker’s mark on reverse of suspension ring unclear but showing 1896-1908 St Petersburg kokoshnik, 63.5mm (including suspension ring) x 58.3mm, thickness 13mm at centre, small chip at the edge of the central medallion on obverse, good very fine and extremely rare; and a modern sash

Attributed to VICE-ADMIRAL OSKAR VIKTOROVICH STARK, 1846-1928 who, as Commander of the Pacific Fleet at Port Arthur, famously arranged a ball in honour of his wife aboard the Petropavlovsk, when the opening salvoes of gunfire in the RussoJapanese War were at first thought to be part of the entertainment provided:

‘The band was playing loudly, and the most honorary guest, Admiral Alekseyev, the Viceroy, glided along the parquet with the heroine of the day with surprising grace for his rather obese figure. When the dance reached its apogee, and the viceroy stood on his knee to circle the lady, the windowpanes suddenly shook from the thunder of the cannonade. Everyone applauded, surprised by such a timely salute, and the overall excitement increased. The ball continued to the accompaniment of the orchestra and artillery fire.’

A noted explorer and recipient of the Order of St. Vladimir, 2nd Class, Stark was recalled to duty in the Great War, when in his late 60s. Resolutely loyal to the Imperial cause he was based in Vladivostok during the Civil War, becoming involved with the White movement. Eventually forced to arrange an evacuation from Siberia in October, 1922 as the Red Army’s impending victory became apparent, and dogged with misfortune, he was finally forced to lower the Imperial standard in the Pacific in January, 1923. In exile he retired to Finland.

Ex Suomen Numismaattisen Yhdistyksen [Finnish Numismatic Society] Auction, Helsinki, 7 April 1990, lot 155. The badge was examined and authenticated at the Hermitage Museum in 1992, when thought to be a First Class award.

Duke William was appointed a Knight of the Garter on 20 June 1831. ‘For bravery and resolution in H.M. Ships Antelope, Badsworth, Bedouin, Blankney, Cairo, Eagle, Hebe, Ithuriel, Liverpool, Marne, Matchless, Middleton, Partridge and Westcott, while escorting an important Convoy to Malta.’ O.B.E.: London Gazette: 8 July 1941: ‘The KING has been graciously pleased to give orders for the following Appointment to the Most Excellent Order of the British Empire for courage and good seamanship in rescuing survivors from a burning Vessel: To be an Additional Officer of the Military Division of the said Most Excellent Order: Commander
Bryan Gouthwaite Scurfield, A.M., Royal Navy, H.M.S. Broke.’

‘On 13th May, 1937, H.M.S. “Hunter” sustained serious damage in an explosion off Almeria, Spain. Immediately the ship took on a heavy list, all lights were extinguished and there was no steam. Apparently she was about to sink. Lieutenant-Commander Scurfield, who was aft, rushed forward. Passing the galley, he heard cries from the Petty Officer Cook, who had fallen into the boiler room. He jumped down through the smoke, oil fuel, steam and debris, and by extraordinary feats of strength removed the wreckage pinning the man down. The rating was passed up on deck, but did not long survive.

Lieutenant-Commander Scurfield then proceeded to the Torpedomen’s mess deck. This was flooded to a depth of 2½ feet in oil fuel; also battery gas had escaped from the switchboard room. The ladder having been blown away, he jumped down into the mess deck, not knowing whether it was intact, and passed up two men. Calling for assistance, he was joined by Lieutenant Humphreys and A.B.s. Collins, Thomas and Abrahams. After the mess deck had been cleared, he led the party into the Stoker Petty Officers’ mess. The bulkhead had been shattered, and bedding and curtains were smouldering on top of the oil fuel. Bodies were pulled out from under the wreckage, and passed up on deck.

During the whole of this time, he might in the darkness have fallen into the oil fuel tanks below or into the sea. By his gallant behaviour he saved the lives of Stoker Petty Officers Lott, May and Fenley, Stoker Neil and A.B. Oliffe.’
Polish Cross of Valour: London Gazette: 21 October 1941: ‘In recognition of services during the withdrawal of Polish Forces from France in 1940.’

B RYAN GOUTHWAITE SCURFIELD was born in August 1902 and was educated at Charterhouse. In September 1920 he entered the Royal Navy as a ‘Special Entry’ Cadet aboard H.M.S. Temeraire. In the following year he was transferred to the training ship H.M.S. Thunderer and, following his appointment as Midshipman he served aboard H.M.S. Iron Duke, taking part in the evacuation of Greek refugees from Smyrna in September 1922. In spring 1927 he joined H.M.S. Wolverine, engaged in convoy work up the Yangtsze River from Chinkiang.

In 1935 Scurfield was given his first command in H.M.S. Skate, a battleship built in 1917 and the last remnant of the Grand Fleet. She took part in the Jubilee Naval Review at Spithead (Jubilee medal). In 1936, he received a brand new command – the battleship H.M.S Hunter. On 13th May 1937 the Hunter was six miles off shore from Almeria, Spain waiting to take 60 refugees to Gibraltar the following day. At 2.15 pm a massive explosion occurred when the ship struck a floating Nationalist mine, causing the fore-mast to break into three pieces and the bridge, mast and funnel to be
drenched in oil and water. With the ship’s radio out of action, Scurfield took stock of the situation and determined to do everything possible to rescue the wounded (see details in the A.M. citation).

Eight men lost their lives and a further eleven were wounded while the Hunter, listing badly, was towed into Almeria harbour by the Spanish battleship Lazaga. Local trawlers removed the wounded and took them to the Jaime I where eight wounded men were treated, the other three being taken to the Military Hospital.

The Hunter was subsequently towed to Gibraltar and, following a £150,000 refit, she joined the Second Destroyer Flotilla in October 1938 (she was to be sunk by enemy gunfire during the first Battle of Narvik in April, 1940). In 1938 Scurfield was transferred to H.M.S. Active. He was mainly involved in patrols around Gibraltar, as well as conveying Arab deportees from Palestine to the Seychelles.

After the outbreak of war in September, 1939 he was placed in command of H.M.S. Broke, being joined by Lieutenant Peter Scott, son of Robert Falcon Scott, who was later to record his experiences serving under Scurfield in his autobiography The Eye of the Wind. In the aftermath of Dunkirk the Broke took part in the evacuation of 200 Polish soldiers from Brest; on the return voyage she was frequently strafed by German dive bombers and Scurfield was recognised with the Cross of Valour from the Polish Government in Exile.

On 6 April 1941 Broke went to meet a homeward-bound Gibraltar convoy. She encountered three ships: H.M.S. Comorin, an armed merchant cruiser, H.M.S. Glenartney and the U.S. Lend-Lease vessel H.M.S. Lincoln. Two hours later, at 6.25 pm, the Lincoln signalled to the Broke that the Comorin was on fire. When the Broke reached her no lifeboats were left but, after several contacts, Broke managed to rescue 180 Officers and men who were taken to Greenock and from there transferred to Renfrew hospital. For his outstanding seamanship in rescuing the survivors Scurfield
received the O.B.E.. In July he left Broke and was appointed to command H.M.S. Bedouin, joining an Arctic Convoy to Murmansk in November, 1941.

In June 1942 Bedouin, along with Partridge, Ithuriel, Marne and Matchless formed part of the escort for the Malta Convoy Operation Harpoon. On 15 June they encountered the VIIIth Italian Naval Division under Admiral Albert de Zara and both Bedouin and Partridge were hit, Bedouin being finally sunk by a torpedo fired from a Savoia 79 aircraft. After 3 hours in the water 213 survivors were picked up (and of the 17 merchant ships which had left for Malta, only two arrived). Scurfield survived to be imprisoned in Campo P.G. 35 in the Charter House of St. Lorenzo, Padula, 100 miles south of Naples. In October 1942 he was moved to Campo Concentramento N29 at Veano but was returned to Padula in April, 1943.

Following the Italian surrender in July 1943 Scurfield was transferred to Germany and was imprisoned near Coblenz until November, 1943 when he was moved to Marlag Nord, Westertimke, a Naval Camp. On 9 April 1945 Westertimke was evacuated and the prisoners were marched towards Lübeck and on 11 April the column was attacked by half-a-dozen Allied fighters. Bryan Scurfield was mortally wounded and died the following afternoon at the Zeven hospital. He was buried initially at Zeven Cemetery before being re-interred in the C.W.G.C.’s Cemetery at Becklingen.

The lot is offered with:
Original Warrant of Appointment for the D.S.O.
Original Warrant of Appointment and forwarding letter for the O.B.E.;
Original cases for the D.S.O. and O.B.E. (this damp stained);
Forwarding box and Condolence Slip for Second World War Campaign Medals;
Riband bar for Jubilee Medal, miniature riband bar for the Albert Medal and Jubilee medal, and an additional piece of Albert Medal riband;
Full dress fore-and-aft hat;
Full set of undress uniform in named tin trunk;
Pair of full dress epaulettes (one lacking King’s crown), these also contained in named tin trunk;
A copy of an extensive illustrated biography compiled by Bryan Scurfield’s son David, entitled Bryan Scurfield: A Portrait of a Destroyer
Captain in the Royal Navy; with vignettes of a family at war 1902-45; and a CD of related images, copied cuttings, etc.

Auctioneer James Morton said he was delighted with the results of the sale, notably the prices paid for Russian material, which continues to attract much attention and shows great strength. The collection of 59 individual Waterloo Medals, one of the largest and most complete to come to auction in recent years, also attracted buyers, raising a sold total of £151,608, with eight lots unsold. The S.S. Titanic and R.M.S Carpathia silver medal awarded to C.W. Bairnson, Chief 3rd Class Steward on the Carpathia who helped assist Titanic’s steerage survivors sold for £5,040, while the Malta Convoy D.S.O. Lifesaving O.B.E. and Inter-War Albert Medal and Polish Cross of Valour Group awarded to Commander Bryan Gouthwaite Scurfield, Royal Navy, sold for £15,600.