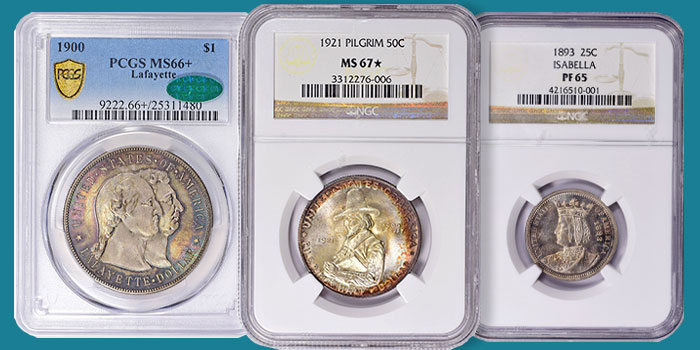 GreatCollections is offering collectors the opportunity to bid on a number of pieces from the Gregg Bingham Collection. Since this collection contains several extreme conditional rarities with a quality provenance, this is a truly extraordinary opportunity. Ending times for lots in this sale are spread out over two weeks, with the first pieces ending in six days on Sunday, June 12, and the last on Sunday, June 26. There are 110 PCGS-graded and 48 NGC-certified coins offered, with 75 approved by CAC.

After Bingham retired from the National Football League, he began collecting coins and amassed one of the best type collections of United States commemorative half dollars. His goal was “to get the most beautiful coins,” with a focus on toned coins.

Of particular interest in this sale is the 1921 Pilgrim Tercentenary Half Dollar NGC MS-67 ★. At the time of publication, this fully lustrous coin currently stands at $1,200 with 42 bids. The lot closes on Sunday, June 12, 2022, 07:03:44 PM Pacific Time (10:03 Eastern). Since the auction record for an MS 67+ of $9,988 was set in April 2017, there is still significant room for movement on this coin! This particular example has full mint luster and a pleasing ring of dark orange and purple toning on both faces.

Struck for only two years in 1920 and 1921, these coins were intended to commemorate the tercentenary or 300th anniversary of the Pilgrims’ landing at Plymouth Rock, Massachusetts. The coins were also intended as a fundraiser for events planned by the Pilgrim Tercentenary Commission. The famed Boston sculptor Cyrus E. Dallin was contracted to model and design both faces of the coin, and according to Q. David Bower’s Commemorative Coins of the United States: A Complete Encyclopedia (1991), the original bill presented to Congress asked for a mintage of 500,000 pieces.

While the United States Mint struck 152,112 pieces in 1920, they only produced 20,053 in 1921. Despite this difference, there are similar survival rates for both years in Gem condition. The combined population reports for both PCGS and NGC indicate that there are 14 surviving examples of the 1921 in MS 67+ and one in MS 68. Similarly for the 1920, there are 17 graded as MS 67+ and four in MS 68. This lack of high-grade examples is probably because, as one of the early pre-1930 commemorative half dollar types, the Pilgrim Tercentenary half dollar was not collected at the same rate as later commemorative half types.

The obverse design depicts William Bradford from the waist up, wearing the quintessential pilgrim’s hat and holding a bible. The date (1921) can be found in the large open left-hand field and the national motto IN GOD WE TRUST in the right. The legends UNITED STATES OF AMERICA and PILGRIM HALF DOLLAR circle the design and are separated by two stars. Dallin’s initial “D” can be seen below Bradford’s elbow, and while it is often mistaken for a Denver mint mark, all of these coins were struck at the Philadelphia Mint.

The reverse design shows the Mayflower sailing to the left on choppy water. Interestingly, the ship is depicted with a triangular flying jib as the forwardmost sail, but this type of sail wasn’t developed until the early 1600s, while the Mayflower was built at the end of the 1500s with a square watersail.

As the first silver commemorative coin struck by the United States, the 1892 Columbian half dollar has proved to be quite an important piece in numismatic and cultural history. Sold “at a premium” during the Chicago World’s Columbian Exposition in 1893, the Mint struck 950,000 pieces in the first year of production and slightly over 1.5 million during the second. This was in contrast to the five million authorized by Congress. 1892 Columbian half Proof coins are quite rare, with only 103 examples struck, making this coin exceedingly rare.

The Oregon Trail half dollar is a top population coin with intense natural purple, blue, and orange bullseye toning on the obverse and a subtler halo of toning on the reverse. This toning comes as a result of being stored in a Wayte Raymond album for decades, and this stunning coin presents no marks or blemishes.