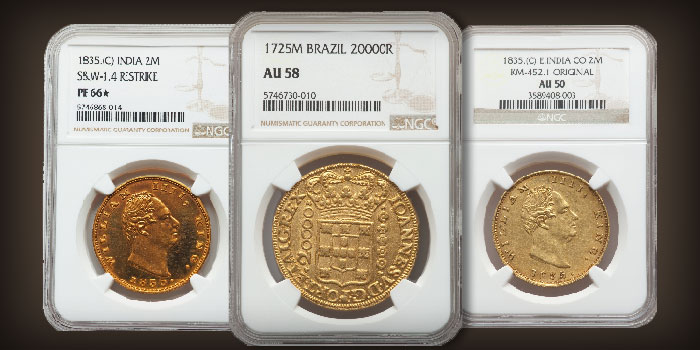 The latest month-long auction from Heritage features a Special Selection of Brazilian coins, offered entirely without reserve. This auction, containing Brazilian selections for all numismatic budgets, is open for bidding now, with the live session scheduled for Sunday, July 26 at 8PM CT, exclusively through coins.HA.com.

A 1725-M 20000 Reis coin of João V has brought the most bidding attention so far. This large gold coin represents an important and popular type, and this NGC-certified AU58 example represents the finest available to most collectors, as the issue is quite scarce in mint state grades.

A Major Rarity of Indian Numismatics

An uncontested rarity within Indian Numismatics, this confirmed original specimen, lightly patinated and with remnants of luster in the deeply golden fields, is the only certified example in either the NGC or PCGS census. In fact, while restrike examples appear frequently (including an example graded PR66 ★ by NGC in our Platinum Night session), an original striking is incredibly rare. Our research shows no other unequivocal original 1835 2 Mohurs to have ever appeared at auction. Within the last 10 years there have been two disputed examples sold, though both realized prices in-line with the value of a restrike.

Experts have speculated that the original mintage of the 1835 2 Mohur was never released–the coins appear to have been used only for internal “Treasury” and bank transactions. And, while the reported mintage is approximately 1,174, that is thought to be overestimated and more importantly, the overwhelming majority of that figure was melted.

To that end, there is a shocking lack of known verified specimens. To date, it is postulated that only three examples are known to exist, further shrouding this “dream coin” in mystery.

This current specimen, one of those three, was unknown to the market until now, and is the only original strike graded by a third-party grading service.

There are a number of distinguishable characteristics that separate an original from a restrike.

Starting from the outside of the coin, the rim of the original is very distinctive; it has a “natural” appearance–exactly like other business strikes from this same period.

A second area of interest–and perhaps the main, definitive area in terms of diagnostics–is located on the reverse. Between an original and restrike example, radical differences are noted to the design of the palm fronds. It is not unusual for restrikes to show fronds that have been completely polished away, while others are no longer even attached to the branches of the tree itself. And, in the foreground, there are very noticeable differences to the presentation of the lion; on a restrike, the rear leg is almost completely gone, essentially portraying the lion as having only three legs. Confirmation of these differences in the two die types are noted correctly in the Standard Catalog of World Coins and the Catalogue of British Colonial and Commonwealth Coins by Andre de Clermont.

Finally, there has been speculation regarding a redesign and re-engraving, as well as the addition of heavy polish to the die, making the diagnostics conclusive.

The specialists of Indian coinage from this colonial period know how rare an opportunity this is. And so, for the collectors who have long awaited the possibility of procuring a confirmed, certified original striking of this elusive and highly desirable rarity, the time has finally come.