On May 25, 2016, in cooperation with Sotheby’s at Sotheby’s International Headquarters in New York City, Stack’s Bowers Galleries will offer not only the finest known 1804 silver dollar, but also the rare and legendary 1822 half eagle. Although both were once included in the famous Virgil M. Brand Collection, never before in auction history have these two rarities appeared at auction together.

These two masterpieces will also be accompanied by a similarly unparalleled group of some of the finest and rarest coins produced in the United States in the first part of the 19th century.

The Sultan of Muscat-Childs-Pogue 1804 silver dollar has been graded Proof-68 by PCGS, and is the single finest example of what has long been regarded as the “King of American coins”. Its provenance begins with its 1835 delivery as a diplomatic gift from the United States of America to Said bin Sultan Al-Said, the Sultan of Muscat and Oman. Since appearing in a London auction in 1917, the 1804 dollar given to the Sultan of Muscat has sold at auction only once, in 1999 when the Pogue family acquired it. At that time, it set a world record price for any coin ever sold at auction, an honor it held until Sotheby’s and Stack’s reset the record when they sold the 1933 double eagle. The Pogue 1804 silver dollar remains one of the five most valuable coins in the world. 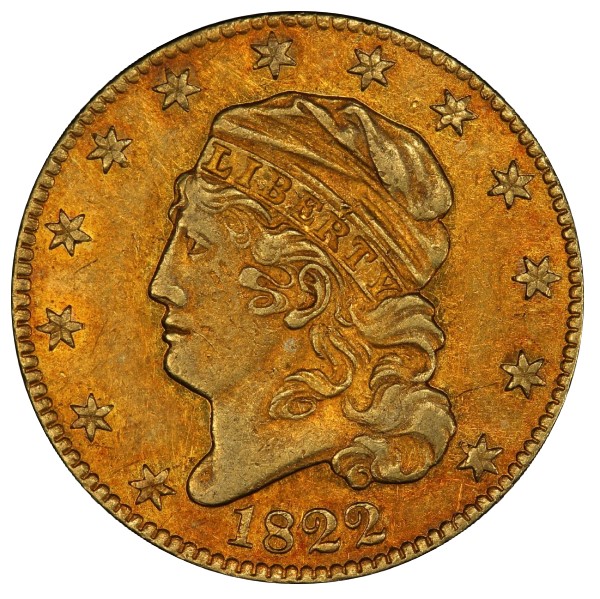 The 1822 half eagle is a coin that has been simply unobtainable since the Pogue family purchased this example from the Eliasberg Collection in October 1982. Although there are two other examples, both are owned by the United States government and are part of the National Coin Collection at the Smithsonian Institution. The appearance of the Brand-Eliasberg-Pogue example on May 25 will mark only the second time in over a century that collectors have had the chance to compete at auction for this magnificent rarity.

Joining these rarities is a host of other extraordinary half dollars, silver dollars, and half eagles.

First among these is an 1838-O Specimen half dollar, without doubt the rarest and most famous product of the New Orleans Mint. The Garrett “Proof” 1795 Draped Bust, Small Eagle dollar is legendary among numismatic experts as the only Specimen striking of the entire type. Graded SP-66 by PCGS, the Garrett dollar was described as Proof in the 1980 Garrett II sale, and it has been discussed in hushed tones of awe ever since. Once the property of 19th-century Philadelphia numismatist J. Colvin Randall, the Garrett 1795 Draped Bust dollar sat in the same cabinet as the remarkable John Jay Pittman 1833 half eagle, graded Proof-67 (PCGS). These two coins were reunited in the D. Brent Pogue Collection in 1997. On May 25, they will be sold on the same night.

The eyes of the world will be focused on this sale–an event the likes of which has never happened before and will never happen again.

You are invited to learn more, bid, and possibly buy, or participate as an interested observer while history is being made. For more information about the D. Brent Pogue Collection Part IV auction, visit StacksBowers.com.