The Stack’s Bowers (and Heritage) ANA auctions were historically significant in this most unusual year as they were held the week after the in-person convention.

From a purely selfish point of view, I was happy about this. First, I wouldn’t have to put in any 16-hour days at the ANA, which is par for the course when I work at the show until 5 pm and then I’m bidding until 10 pm. Second, it meant that I would be able to offer my coins before the auctions would offer their coins and I much appreciated the head start.

Given the current state of the market, I’m sure that Stack’s Bowers was happy to give me the head start. There is a lot of demand right now for really good coins and between what I had to sell and what Stack’s Bowers had available, the supply clearly isn’t enough to keep up with the demand. I expected the sale to be strong and, for the most part, it didn’t disappoint.

Let’s take a look at a few of the more interesting coins in the sale. The coin brought $156,000, which was a fair but not overly strong price. Had the coin been PCGS/CAC, I would have expected it to bring over $200,000. This was a nice purchase for the collector who isn’t necessarily playing the set registry game but who wants to own an uber-grade Type Two gold dollar.

This coin was totally fresh to the market. I had mixed reactions to it. I thought it was accurately graded and it had great eye appeal but I thought it had an awful lot of rub on the cheek of Liberty. This issue is actually rarer than the better-known 1796 No Stars, and it is a major rarity in Uncirculated with three or four known. The best is clearly the ex: Simpson coin, which sold in January 2021 for $1.38 million. I sold an NGC MS63 (now graded MS62+ by PCGS/CAC) for $324,000 in 2017, and the PCGS MS62 Pogue coin brought $440,625 in May 2015. I love this date. It’s an overlooked rarity despite a tiny mintage of 427 and it has a very distinctive appearance as every known example shows a massive obverse die crack on the right side of the coin (which tells you how shoddy the mint’s operations were in 1797 in terms of production). Around three dozen exist in total, with perhaps two or three in AU58 and another two or three in Uncirculated. 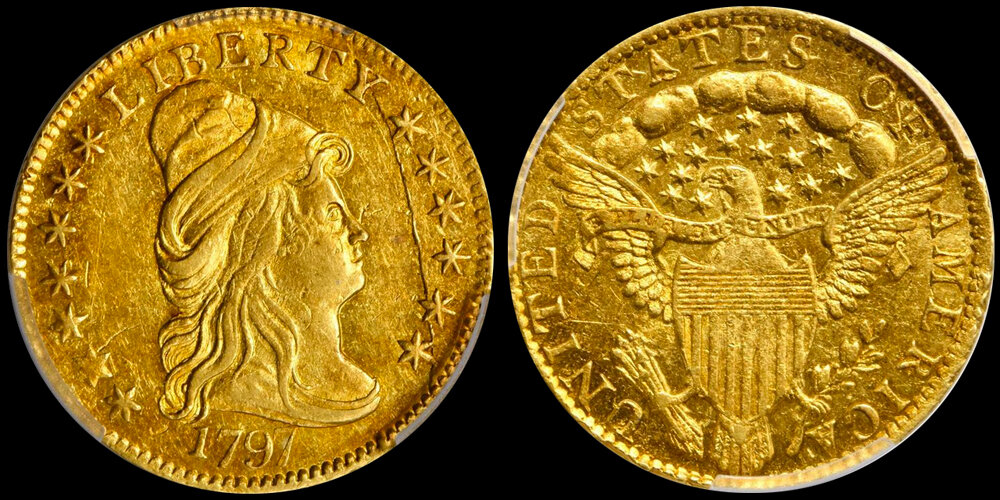 I wasn’t crazy about the coin in the Stack’s Bowers sale. It had pretty color but the fields were awfully busy for a 58. The most recent APR for a PCGS AU58 was the Pogue coin, which realized $152,700 but was a real 58, in my opinion. Nevertheless, the coin brought $168,000, which I feel is very strong given its quality but may seem “reasonable” or even sort of “cheap” to a novice collector.

As soon as I saw this coin featured in a Stack’s Bowers consignment ad sent to me via email months ago, I forwarded this to a good friend and wrote: “This 1870-CC $5 is going to bring a fortune.” Carson City gold is absolutely on fire right now and everyone needs an 1870-CC half eagle (or eagle, or double eagle…) for their set. This was the first comparatively high-grade example to come on the market for some time, and I thought the coin was pretty decent for the grade. I loved this coin from a quality standpoint. It was mostly Prooflike with nice original color and just a hint of rub. It was truly a Gem Slider, and you’d be lucky to find an 1838 eagle in a 62 holder with this much eye appeal. This first-year-of-issue is really scarce in the higher AU grades and very rare with Uncirculated with around five or six known; none of which could be bought today for less than $100,000.

This coin sold for $52,800, which I regard as a fair price for the coin. If this coin ever stickers (which I think it should), then it could easily eclipse the 2016 auction record mentioned above.

This fresh-outta-Europe coin was probably my favorite lot in the sale. It is one of just two or three really “new” 1884-CC eagles I’ve seen. There’s one finer than this (a PCGS MS63 from the Bass collection), while the previous second-finest is the PCGS MS62 in the Tyrant Collection. Given all this and the fact that great CC gold coins are (as I said above) sizzling right now, I expected this coin to bring around $80,000-90,000. It set a record for the date at $132,000. Was I surprised? A little… but I certainly wasn’t shocked. This isn’t as sexy a date as one of the low-mintage CC issues from the 1870s, but given its rarity, its terrific eye appeal, and approval by CAC, I understand the strong price.

Like so many Type Three double eagles, the 1888 fits the following rarity profile: common in grades through MS62+, a bit scarce in MS63, rare in properly graded MS64, and exceedingly rare in MS65. After three+ decades of grading, this 1888 remains the only example of this date to ever slab MS65 at PCGS. And not only that, this coin wasn’t a pretend MS65 that had been doctored after being in a 64 holder. It was a stone Gem and an exceptionally nice piece. Instead, it smashed all expectations and brought an incredible $92,000.

I’m going to assume that this went to a prominent Utah collector who owns the best set of $20 Libs ever assembled… but I wonder who his underbidder(s) were.

All in all, the August 2021 Stack’s Bowers Rarities Night sale was strong to very strong. If you are hunting for bargains in today’s market, auctions appear to be the least likely place to find them.