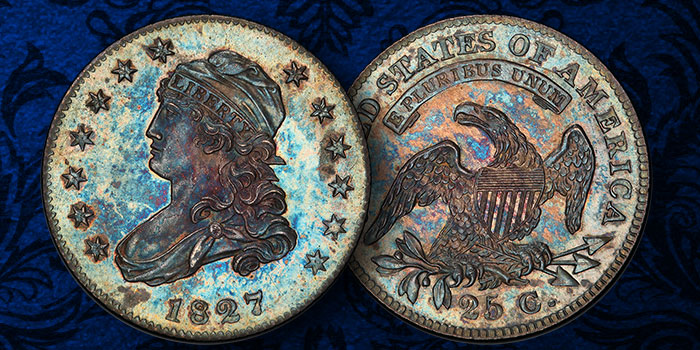 On Sunday, June 14, bidding ends on GreatCollections.com for this toned overdate Original 1827/3 Capped Bust quarter, graded Proof-65 by PCGS. The coin on offer was once part of the Virgil Brand Collection but it has a much longer pedigree, having been owned by such other American numismatic luminaries as Waldo Newcomer, Thomas Cleneay, Jerome Kern, and Wayte Raymond.

One of the most notable rarities of American numismatics, all 1827 Capped Bust quarters are overdates, with the numeral “7” punched over the “3” that ended the date 1823. Contrary to a reported mintage of 4,000 business strikes, only a scant 12 Proof Capped Bust quarters are known to have been struck in the year 1827. The true extent of the coin’s rarity was appreciated by collectors at least as early as 1857, if not earlier, and numismatic interest motivated the United States Mint to produce an unknown number of restrikes in subsequent years. Twenty restrikes are known to have survived today; they can be distinguished from the original 1827 quarters by a square base numeral “2” on the reverse, as opposed to the original’s curl base “2”.

Only nine of the 12 known struck original 1827 quarters are known to the market today.

Both restrike and original are obviously rare, but as additional restrikes trickled into the marketplace over time collector demand shifted solidly in favor of the original 1827 Capped Bust quarter Proofs. Indeed, the coin attains the highest prices for all issues of the Capped Bust quarter series.

As for the issue’s performance on GreatCollections, be sure to check out their Auction Archives of over 600,000 certified coins sold in the past seven years.

Background of the Capped Bust Quarter

The last Draped Bust, Heraldic Eagle quarter dollar was minted in 1807, the same year that German immigrant John Reich was hired by the U.S. Mint. Tasked with creating new coin designs, Reich modified Liberty’s portrait and the reverse eagle, producing designs that appeared on the half dollar and half eagle in 1807, the quarter eagle in 1808, and then the dime in 1809. After an eight-year gap in production, the quarter dollar was minted with the new Capped Bust design in 1815.

Quarters were not regularly produced in the early 1800s because demand for the denomination was limited. Spanish two-reales pieces still circulated at the time. These coins had the same legal tender value as the quarter but the reales were lighter weight. The heavier United States quarters, which contained more silver, therefore did not circulate as much. The 1815 quarter mintage happened only because banks had ordered them and not, as far as we know, because of a federal interest in increasing their use (over 20 percent of the 1815 mintage went to one bank, the Planters’ Bank of New Orleans). Production was further compromised by a fire at the Mint in early January 1816, which halted production of gold and silver coins. Quarters were not produced again until 1818, and, except for 1826, yearly thereafter until the end of the Large Diameter type in 1828. The Reduced Diameter type, which also removed the motto E PLURIBUS UNUM from the reverse, was produced from 1831 through 1838, when the Capped Bust design was replaced by the Seated Liberty quarter.

Prices for business strike Capped Bust quarters are moderate up to XF grades, advancing steadily and becoming very expensive at Gem and finer. A few hundred pieces have been certified for each year that quarters were produced for circulation, though some varieties are represented by only a few. The 1822 25C over 50C variety is expensive in all grades, and the low-mintage 1823/2 overdate is extremely expensive. A few Prooflike business strikes have been certified. A small number of Proofs from each year are listed in population reports, which include pieces with a Cameo designation. All Proofs are expensive to extremely expensive, with the very rare original 1827/3 at the top of the price range as mentioned above, closely followed by the 1827/3 restrikes.

The obverse portrait is of a more fulsome Liberty than the previous Draped Bust style, which led to unfortunate (albeit unsubstantiated) comments that Reich had modeled Liberty after his “fat mistress”. Liberty is wearing a mobcap (a fashionable woman’s headdress of the period, not a liberty cap as it is sometimes stated) with a band displaying LIBERTY. Long curling hair drapes over the forehead, around the ear, across the shoulders, and down the back. A flowing robe covers the bust and shoulder, fixed with a clasp above the shoulder. Thirteen six-point stars surround the portrait, seven to the left and six to the right, just inside a dentilled rim. The date is centered at the bottom.

The reverse displays a left-facing eagle with outstretched though partially folded wings and a Union shield across its breast. The left claw clutches three arrows, the right clutches an olive branch. UNITED STATES OF AMERICA encircles inside the dentilled rim around the top two-thirds of the coin, and the denomination of 25 C. is at the bottom, below the eagle. A concentric banner with E PLURIBUS UNUM is located above the eagle’s head, below STATES OF. All coins were minted at Philadelphia and so no mint mark appears on the coins.