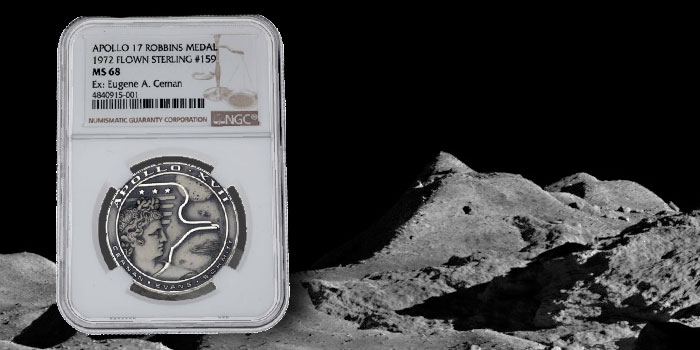 One of approximately 80 silver Robbins Medallions that flew on Apollo 17, which once belonged to the last man to walk on the moon, could bring $50,000 or more in Heritage Auctions’ Space Exploration Auction June 5 in Dallas, Texas.

“Anything that went on a lunar mission is in extremely high demand,” Heritage Auctions Space Exploration Director Michael Riley said. “That this belonged to Gene Cernan is additionally significant, because there has not been a mission to the moon in nearly 48 years. This is a very significant piece of space exploration history.”

Like Neil Armstrong, Cernan was a graduate of Purdue University, giving the school bragging rights for both the first and last man to walk on the moon.

Apollo 11: Deluxe Limited Edition (#5/11) Framed Presentation including a Flown American Flag, a Crew-Signed Insurance Cover, a White Spacesuit NASA Color Photo, and a Crew Patch by Texas Embroidery, all Directly From The Armstrong Family Collection™ and CAG Certified (estimate: $40,000+) is an assembled trove of prizes from the first mission to reach the moon, the fifth of just 11 such framed collections ever assembled. The assembly includes:

Each item is individually certified, and the lot includes a Statement of Provenance signed by Armstrong’s sons, Mark and Rick.

The Apollo 11: NASA “Final Apollo 11 Flight Plan AS-506 / CSM-107 / LM-5” July 1, 1969-dated Book Signed by Neil Armstrong to Los Angeles Times Aerospace Editor Marvin Miles, with Crew-Signed Lunar Surface Color Photo, in Framed Display (estimate: $40,000+) is quite simply one of the most important documents in the history of space exploration, the game plan for the first successful mission to the moon. The first man to step on the surface of the moon, Armstrong signed the flight plan in 1974 to Miles: “Best Wishes/ to Marvin Miles–/ Top Aerospace Writer/ & Fellow Aerospace Enthusiast/ Neil Armstrong/ Apollo 11 .” The flight plan is housed in a shadow box along with a 7-by-7-inch (sight size) color photo of Aldrin setting up an experiment on the lunar surface with the Lunar Module Eagle visible in the background. The photo is signed by all three crewmembers.

An Apollo 13-Flown American Flag on a Crew-Signed Certificate, Originally from the Personal Collection of Mission Command Module Pilot Jack Swigert, with Letter of Authenticity Signed by His Niece (estimate: $15,000+) is lightly mounted to a heavy 10-by-12-inch certificate with the following printed statement: “This flag was on board Apollo XIII during its flight and emergency return to Earth/ APOLLO XIII/ April 11-17, 1970/ Lowell – Swigert – Haise.” Astronaut Lovell has signed this flag: “On board Apollo 13 Spacecraft/ James Lovell.” Because Apollo 13 followed a free-return trajectory, its altitude over the far side of the moon was about 60 miles higher than any other Apollo mission, so no American flag ever has flown farther from the earth than this one.

Apollo 1 Crew-Signed Large Color Photo in Handsome Framed Display, with Full Letters of Authenticity from both Steve Zarelli and PSA/DNA (estimate: $12,000+) is a 13-1/4-by-10-1/2-inch color NASA photo of the crew scheduled to fly the first three-man American space mission. But astronauts Ed White, Gus Grissom and Roger Chaffee, each of whom signed the image, died in a launchpad test fire in January 1967. One of the original “Mercury Seven”, Grissom was the second American in space on MR-4 Liberty Bell, and later flew on the first Gemini mission. A member of the second NASA astronaut group, White flew on Gemini 4 and performed the first American spacewalk. Chaffee was in NASA’s third group but lost his life before his first space mission. This is the finest signed Apollo 1 display piece ever offered by Heritage Auctions, and is accompanied by LOAs from Steve Zarelli (#190919-2107) and PSA/DNA (#AH02415).

Other top lots in the sale include, but are not limited to: