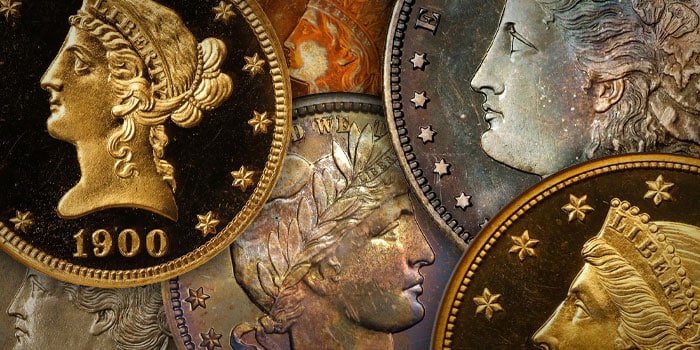 Stack’s Bowers Galleries will offer two remarkable early Proof sets, one from 1855 and one from 1900, in their November 2022 Official Auction of the Whitman Coin & Collectibles Winter Expo. The 1900 Proof set is nearly complete (missing only the Barber dime) including the gold denominations and all coins feature CAC approval. The 1855 set showcases the silver and minor denominations from the silver dollar to down to the half cent and includes several coins with CAC approval.

The coins will be offered individually in consecutive lots in the firm’s Rarities Night session on Tuesday, November 1.

Proof set production at the Philadelphia Mint was relatively high in 1900, with a total of 912 full sets produced; minor Proof sets (which included the cent and the nickel) were also produced. Production declined over the next 15 years, reaching a low in 1914.

Walter Breen noted that many early 20th-century Proof coins exhibited spots that often prompted harsh cleaning, making attractive original examples like those offered in the Stack’s Bowers Galleries November auction especially sought-after. These pieces would be lovely additions to the cabinets of many numismatists, from Proof type collectors to series specialists.

Also offered in the sale is a nicely matched 1855 Proof set including all silver and minor coinage from the Braided Hair half cent through the Liberty Seated dollar. Proof production in the mid-19th century was not extensive, and some of the offered coins have estimated mintages of just 20 or so. Precise mintages of specimen coinage were not recorded, and most examples were struck for collectors with political connections or relationships with Mint personnel. The Liberty Seated dime, half dollar, and dollar received Cameo designations while the three-cent silver piece, quarter, and half dollar all received CAC approval. This sale represents a great opportunity for 19th-century Proof collectors to acquire some attractive, rare issues. Details on the 1855 Proof Set are listed below.

These two fascinating Proof groups along with the entire Official Auction of the Whitman Coin & Collectibles 2022 Winter Expo will be available for viewing and bidding at www.StacksBowers.com. To inquire about printed catalogs contact [email protected]. To consign to a Stack’s Bowers Galleries auction email [email protected] or call 800-458-4646.