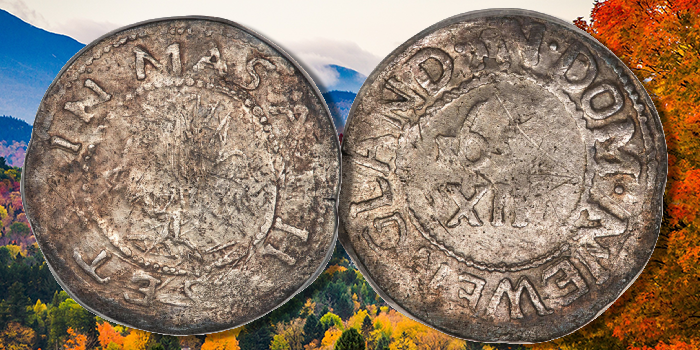 Willow Tree shillings are among the rarest Massachusetts silver pieces. The coins are believed to have been struck between 1653 and 1660, although some writers question the 1660 date, considering the rarity of these pieces today.

The Willow Tree coinage was struck on a rocker press, which pressed blank planchets between curved dies in a rocking motion. The result was inconsistent, slightly elongated coins. All known Willow Tree shillings show varying degrees of multiple strikes.

The present coin is remarkable in that it appears to be entirely unclipped, and the full design and border legends are intact. The reverse shows a secondary strike, but it mainly affects AN and the N in NEW. The edges of the planchet are slightly irregular, but the coin is for the most part round, not elongated. Most Noe 3-E examples known show little or no central detail, but this piece retains about half of the tree detail and on the reverse is weak only on the 52 of the date. Russet toning accents the satiny surfaces, and there are no mentionable abrasions.

Our upcoming September 18-20 US Coins Signature Auction features an outstanding example of the Noe 3-E variety, of which only eight or 10 pieces are known in total. NGC has certified the coin as Very Fine 35.

Heritage Auctions recently handled a heavily clipped VG Details specimen, which realized $16,800 USD. Before that, the next most recent Noe 3-E example that we handled was the Ford-Manley VF35 coin in the 2010 ANA Signature Auction, which garnered $230,000. The present piece is by far better detailed than the Ford piece, and it is unclipped. This is a true rarity of early United States coinage, and it may be the finest Noe 3-E Willow Tree shilling that will appear at auction for many years.