Posted by Jim Bisognani  for NGC….

It is truly an exciting time to be involved with numismatics! Spring is finally here, and for most of the country we can shake off the cobwebs and emerge from our winter shelters, at last. It is a beautiful 79 degrees as I write this from my home office in New England. Quite amazingly, only two weeks ago, there was still considerable snow blanketing our yard and piled waist-high around my driveway! Here it is in mid-April and the celebrated boys of summer are at it. Major League Baseball (MLB) is in full swing, and the exciting new releases by the US Mint, the 2014 Baseball Hall of Fame commemoratives, have ignited a blaze of new interest into the coin market. Certainly, this is a grand slam for numismatics. The timing was great for the release, as evidenced by both coin collectors and by MLB fans who stepped up to the plate for these unique issues. Just like the ballgame staples of peanuts, popcorn, and Cracker Jack, these issues were gobbled up and sold out with a fast and furious passion. The secondary market for these coins has been tremendous with NGC’s exclusive National Baseball Hall of Fame logo label and the special Opening Day pedigree having already exchanged hands, in many instances, exceeding tenfold of the issue price!

Well-known Ian Russell, President of Great Collections, concurs with the frenzy here. Ian also went on to advise me that in his opinion, the coin market continues to strengthen. “I’m expecting a busy Central States show at the end of the month. Baltimore was strong, (as it usually is) and we’re seeing record numbers of bidders in our auctions each week. World issues were also strong. Two weeks ago, we sold a 1995 Chinese Unicorn 5 oz. coin graded NGC PF 69 Ultra Cameo. After spirited bidding, it sold for $65,175. A total of 59 bids were received.”

Beside speaking with Ian, I also had a chance to catch up with John Brush, the well-liked vice president of David Lawrence Rare Coin Galleries. In his assessment,

“The coin market still seems to be strengthening, and we’ve seen business, both wholesale and retail, pick up over the last few weeks and months. There has obviously been a lot of interest in the new Baseball Hall of Fame issues recently, and while those prices have been skyrocketing, we expect the demand to calm as the Mint begins to fulfill the orders that were made 2 weeks ago. Our weekly auctions at DLRC have also been strengthening, as we only offer a select number of coins each week for the first time, and they have certainly become very popular. As always, the nicer, higher quality, and rare NGC coins are continuing to fly out the door. Hopefully, this continues as the tax season is upon us, and it’s typically a time where things slow down a little, but we haven’t seen that happen yet this year!”

Numismatics is certainly firing on all cylinders, and it is not just because of the release of the commemorative baseball coins. Vast media coverage is spreading the word about our great hobby too, and in all outlets. With historic finds such as the Saddle Ridge Hoard or the recent reveal of Stack’s Bowers humongous personal hoard known as “The 57th Street Collection,” we involved in the trenches and on the front lines of the numismatic industry have much to be grateful for and much to be excited about.

Whether the hobbyist is first drawn in by the history of our country’s early numismatic heritage or attracted to a particular type coin that dad or grandfather had inspired us to collect, the interest is definitely strong. The coin market, particularly the rare coin market, is enjoying unbridled popularity with collectors as well as with serious investors. The numismatic platform is a solid one and makes a compelling case, not only for numismatists, but also for the pseudo collector/investor who finds the portability and the liquidity, to be truly exciting options.

A chance to build a truly exciting collection, when assembled with care, will be the basis of a solid investment. I spoke to a new investor who attended the recent Baltimore Whitman Expo: “Hey, this was my first live encounter with the hobby,” announced the man from the Green Mountain state of Vermont. “I have made serious inquiries into the prospect of an investment in US and world coins. The recent announcement about the gold hoard in California (the Saddle Ridge Hoard) was the final and necessary catalyst for me to get off my…and make the move. I knew that the show in Baltimore is always well reviewed, so I made the trek here. I came in with some trepidation, but certainly, the hall filled with dealers, collectors and exhibits really got me excited.” 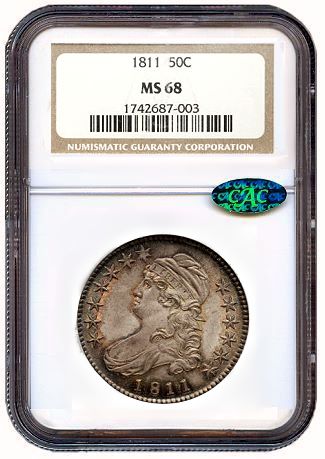 At first the attendee from Vermont had informed me that he intended this venture just as a speculative investment but then that quickly changed. He relayed to me that he is not a huge investor, but that he did have upwards of low six figures to get his collection going. “I made a good dent in that before the shows completion. I had done some research online and picked up a few books and was able to do a little bit of the investigation myself. I had already decided that this would be a good outlet for me to get my feet wet, until I physically held the various rare coins in the certified NGC slabs. That did it for me. I was hooked! Each of the coins I picked up were truly works of art and history that I could hold in my hand and the NGC holders just presented them so well.”

Moving on from the Baltimore show, early April certainly was full of exciting sales, especially for world coins! Certainly the world market has grown exponentially and continues to draw new and excited hobbyists here and abroad. With the advent of several world offices for submissions, NGC is very busy authenticating and grading outstanding world issues from foreign collectors and dealers that previously were unaware of the advantages, protection and guarantee that NGC certification affords them.

Reporting in first in April was Stack’s Bowers Asian extravaganza. According to Chris Karstedt, executive vice president, the Hong Kong showcase auction captured over $7 million. “The market for classic Chinese rarities has strengthened, and the prices realized show that,” relayed an enthusiastic Kent Ponterio, senior numismatist of world and ancient coins.

“There were times when there was standing-room-only during the auction. Vintage and classic Chinese coins realized extremely strong prices,” according to Richard Ponterio, executive vice president of Foreign coins for Stack’s Bowers Galleries.

NGC-certified rarities certainly took the spotlight in Hong Kong. Leading the foray was an extremely rare 1949 Kweichow 50 Cent with the “Greek border” design graded NGC AU 58; it realized $358,500, more than double the pre-auction high estimate. This was followed closely by an NGC MS 61, 20 Cent coin from the same series, which realized $334,600, after much spirited bidding.

Other important NGC properties at the Hong Kong sale:

World issues remain the focal point, and a strong showing verifies the ongoing strength in this market. The Chicago International Coin Fair sale held by Heritage April 10-12 and 15-16 has already reported in with a powerful $13.4 million after six live floor sessions, as we go to press. Leading the historic and rare NGC highlight reel was a classic Russian rarity from the coronation of Nicholas II. This spectacular 1896 25 Roubles (2 ½ imperials) graded NGC MS 61 is an enigmatic gold issue thought to be a commemoration issue of the coronation of the last Czar of Russia. It roared to an impressive $217,375. Ancients also made considerable noise, with three NGC-certified ancient coins that captured well over six figures. A Mark Antony as Triumvir (43-31 BC) AV aureus graded XF by NGC Ancients, a historic world treasure, realized $141,000. A spectacular Gem Pertinax (AD 193) gold aureus, perhaps the finest in existence, thundered to an impressive $129,250. Rounding out the list, an Augustus (27 BC A.D. 14) gold aureus graded NGC AU , captured $111,625.

Other NGC standouts at the Heritage CICF world and Ancient coin signature auction:

Next up is the always well attended Central States Numismatic Society Convention. This show, the 75th anniversary of the Midwest tradition, will be running April 23-26. I look forward to seeing you there!