He was one of the most renowned collectors of his time: Fernand David, the rich Paris manufacturer of trimmings, lace and embroidery. Around 1900, leading French numismatists used David’s collection to advance their research. They appreciated the charming and knowledgeable colleague, most of whose coins – like those of many other coreligionists – were stolen during the Second World War. Despite some gaps, his collection belongs to the important general collections focusing on antiquity and France.

Éditions Victor Gadoury and Alain Weil will jointly offer this incredible ensemble on 12 March 2022 in Monaco. The collection contains 870 lots, including great rarities such as a family aureus of Sextus Pompeius, extremely rare gold coins of the French kings and showpieces of the Féodales coinage, not to mention magnificent medals and distinguished historical testimonies.

The collection was assembled with the knowledge of an experienced numismatist and the money of a successful manufacturer, who – completely bound to the customs of his time – appreciated the historical importance of a piece more than perfect quality. Therefore, you can expect a lot – but not that each and every piece is extremely fine! Of course, there are numerous perfect coins, but also exciting pieces in “very fine” condition. The Fernand David Collection is an ideal opportunity for every collector to acquire impressive coins from an even more impressive collection. A small series of Greek gold coins is followed by an extensive section of about 50 aurei, including great rarities – some of them of the finest quality. These include the rare portrait aureus of Sextus Pompeius featuring the portraits of his father and his brother, as well as rare aurei of the Twelve Caesars and their family members such as Antonia, Drusus and Agrippina.

If you love coins of outstanding quality, you should take a look at the aurei of Lucius Verus and those of the Severan dynasty. The family issues by Septimius Severus featuring the portraits of Julia Domna and his sons Caracalla and Geta are downright spectacular.

About 50 lots with late ancient and Byzantine solidi continue the offer; here, too, connoisseurs will find rare issues at favourable estimates – taking a look is definitely worthwhile! The collector paid special attention to the splendid gold coins of the French late Middle Ages of the era of the Hundred Years’ War. About 70 lots originate from this period. As an example, we show you a Florin d’or of Philip IV, called “the Fair”, who is said to have invoked a curse on his descendants by destroying the Templars and such caused the war between his heirs in England and France. As had to be expected from a French collector, the collection focuses on coins of the French royalty. The collector paid attention to both the rarity of the pieces and the quality of the portraits. Here you can see a rare double Henri d’or à la cuirasse damasquinée, minted in Paris in 1522. The Portrait of Young Louis XV

When Louis XIV’s great-grandson ascended the French throne in 1715, he was only five years old. Therefore, the coronation ceremony in Reims was postponed to 1722. Nevertheless, the Reims mint still minted coins during this period. Among its products is the very rare double Louis d’or aux insignes.

Almost rarer still is the single Louis d’or aux insignes of the first type of 1716 minted in Lyon. It was minted only for a few days at the beginning of the year. A Gold Pattern for the Écu au Bandeau

Of utmost numismatic importance is this pattern for an écu au bandeau in gold featuring the magnificent youthful portrait of Louis XV. Even though the historical sources for this issue are rather poor, it seems that the king himself expressed the wish to replace his childlike portrait, which had been on his coins since 1726, with one that resembled his current appearance much more. 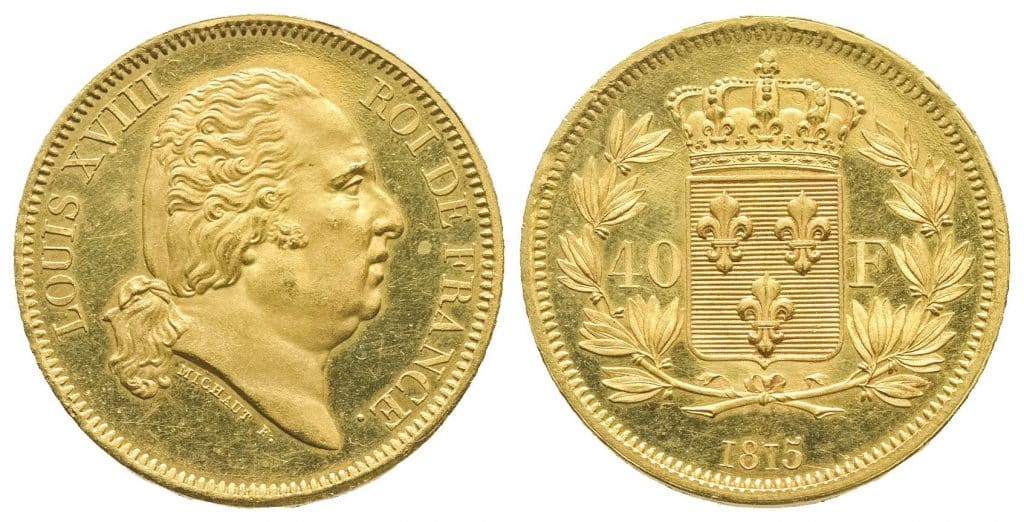 If you are a collector of French coins, you should not miss out on carefully studying this catalogue – no matter what quality you prefer. There are exciting pieces for all collectors, even though we naturally limit this preview to spectacular rarities. However, there is also an extensive offer for smaller budgets. Estimates start already at 250 euros.

Of course, the hammer price for this 19th-century showpiece will be much higher: Auguste François Michaut, one of the most talented engravers of his time, created the portrait of Louis XVIII. Of course, he had a pattern made first.

Generally speaking, the Fernand David Collection contains a large number of interesting patterns, including an 1853 gold pattern and, minted a little later, a pattern for the 5 franc piece of Napoleon III, of which only two specimens had been known so far.

The Most Beautiful French Testons

Gold coins were not the only items Fernand David collected. He was interested in all French coins, which is why this auction provides any connoisseur with the opportunity to acquire a wealth of interesting issues from this magnificent collection – from the Middle Ages to the reign of Napoleon. The estimates are modest. They start at 100 euros and mostly remain in the three-digit range. The fact that Carolingian denarii and some of the most beautiful portraits of the French kings can be purchased for such a favourable sum should be an incentive for every connoisseur to carefully study this catalogue. An Interesting Series of Lorraine Coinage

Foreigners sometimes forget how important the Duchy of Lorraine was in the early modern period. It sided with the Catholics in the Reformation and became a reliable partner of the Habsburgs and Bavaria. This made it the enemy of French kings – however, at the same time, this provided the Duchy with excellent opportunities to position its daughters in royal houses and to obtain high ranks in the Catholic military: Charles IV, for example, of whom an extremely rare 1669 Charles d’or au buste lauré is on offer, fought against France on the side of the Habsburg emperor in the Thirty Years’ War!

About 30 lots with gold coins of the Féodales, i.e. non-royal coinage from France, are on offer. Probably the most beautiful piece is a pavillon of the Black Prince, Edward of Woodstock, eldest son and heir to the throne of the British King Edward III, who, however, died before his father. The impressive coin, which shows him enthroned under a canopy, surrounded by ostrich feathers, is not only of perfect condition but also very well struck. 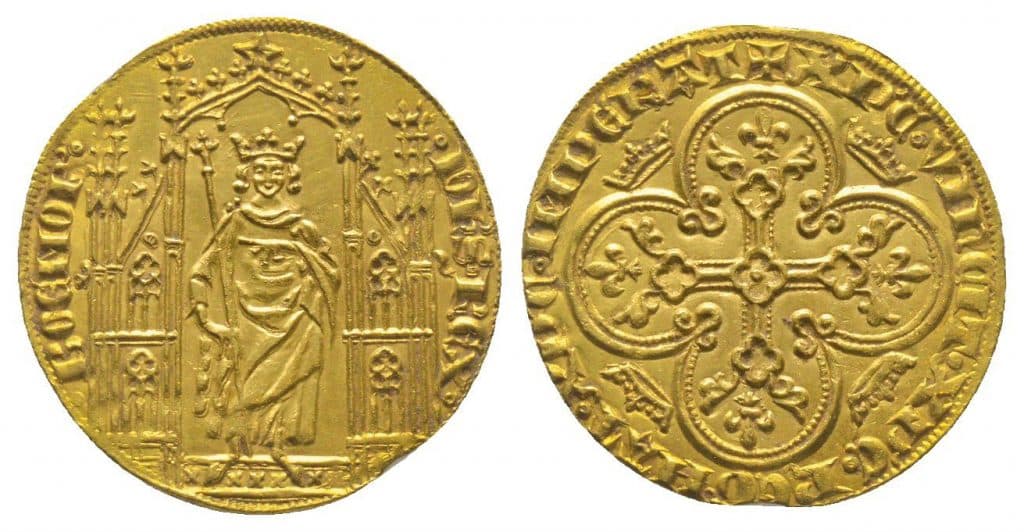 Regarding world coins, the spectrum of the collection ranges from “Allemagne” to “Vatican”. Fernand David collected his coins with a lot of historical and numismatic knowledge, which is why the collection contains numerous historically interesting coins, some of which you are seeing in this preview. Showing the same appreciation of art, the collector was enthusiastic about medals, and the auction offers a rich selection of these pieces. The Ottoman wars, the Thirty Years’ War, detailed portraits and historical views: if you appreciate medals, you should not miss browsing through this catalogue. Of course, the main focus is on France – even though exquisite works from many different regions can be found. 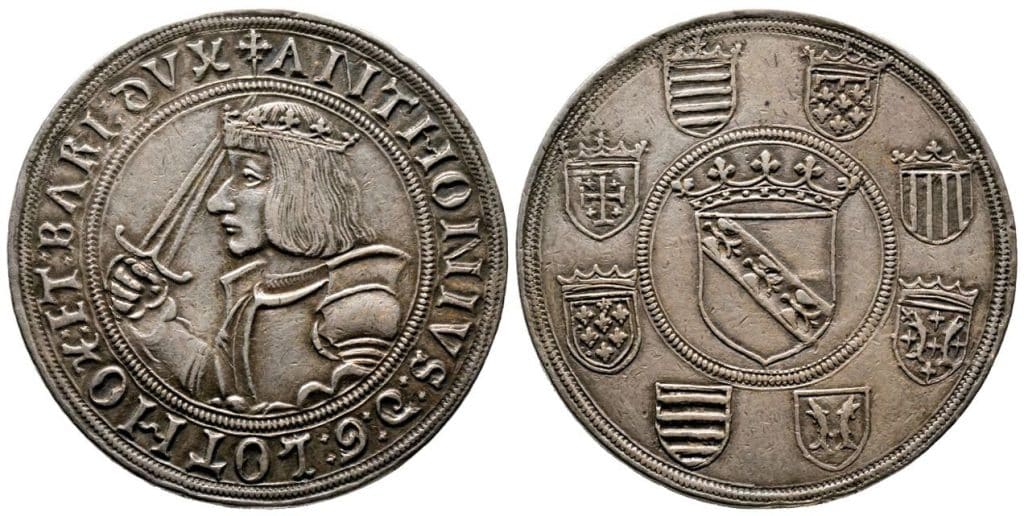 The auction closes with lots of more common historical gold coins, which will be mainly of interest to investors, and with silver and bronze world coins. Here you can find more coins of the Féodales. The outstanding piece is an extremely rare and exceptionally well preserved grand écu by Antoine of Lorraine featuring his portrait.

The auction ends with souvenirs of the French Revolution, including a wax portrait that probably shows the American national hero George Washington, as well as sensibly assembled multiple lots.

You can find the catalogue online at auction.gadoury.com, www.sixbid.com and www.numisbids.com. Of course, it is also possible to bid live on your computer at home via www.biddr.ch.