by Greg Reynolds for CoinLink
This is Part 1 of my review and analysis of the auction of the Millennia collection of world coins. On May 26, 2008 Memorial Day, the firm of Ira & Larry Goldberg sold the “Millennia Collection” of world coins from ancient times to the 20th Century including coins from a large number of nations and all continents. This one collection realized over $20 million, astonishing !

Even people who do not know anything about coins could easily appreciate a Spanish gold coin, minted in Segovia around 1500, that depicts Ferdinand & Isabella. Indeed, a newcomer to coins will see that it has almost zero scratches and contact marks, that it is highly detailed, and that it has attractive subdued luster. It is not necessary to know its grade in order to be stunned by its incredible condition. A grading expert would know that it is a special uncirculated coin and would probably conclude that it merits its certified grade of MS-63, which is an amazingly high grade for a coin minted circa 1500.

Jim Elmen, a long-time, world recognized expert in European coins, estimates that “less than fifty” such King Ferdinand & Queen Isabella gold coins of this issue are known. He adds, “it is an excellent coin” overall. It sold for $48,300 at the auction, a high price for a gold coin from Spain, but perhaps a reasonable price for an important piece of history. Ferdinand & Isabella significantly changed the course of world events. They unified Spain, defeated foreign forces, terribly expelled groups of innocent people from their societies, and are best known for sponsoring the voyages of Christopher Columbus. In many ways, the Millennia collection relates to important events and trends in world history.

While the Millennia collection will be forever remembered for its breadth, and for showcasing historically important coins, its primary characteristic is quality. A substantial number of Millennia collection coins are in the condition rankings for their respective dates and, more importantly, for entire types!

On May 26, ancient coins, mostly Roman, and Anglo-Saxon pennies were auctioned from around 10:00 AM until the early afternoon. Next, European coins were auctioned for the remainder of the afternoon and in the early evening. At night, coins from the rest of the World were sold. In the category of Latin American Crowns, the Millennia collection may be the all-time best to be publicly auctioned. This collection also includes a substantial range of large gold coins, especially of Great Britain and Latin America

Crowns are large silver coins that served as standards in commerce. For centuries, the standard denomination for Crowns of the Spanish Empire, including most of Latin America, was eight reales. Large gold coins minted for commerce usually weigh between 0.75 ounce and 1.25 ounces. 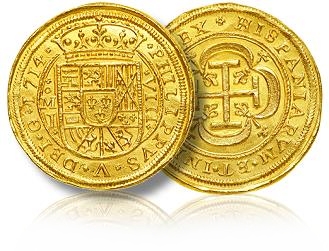 A star of the Millennia collection is a Spanish-Mexican large gold coin from 1714. It is a specially made 8 Escudos coin. It weighs 26.94 grams, about 0.95 ounce, and is thus lighter than a U.S. Double Eagle ($20 gold coin). This coin is an almost uniform cool, yellow color. It is very rare and of incredibly high quality for a coin from this era. It is graded MS-65 on a scale from 01 to 70. It is more than very attractive. Andy Lustig, an expert in attendance, declares that “it is a fantastic coin, a real gem.” Further, Lustig is “surprised that it brought as much as it did.” Bidding opened at more than $130,000. Three collectors competed with dealer Larry Hanks, who eventually won the contest with a bid of $310,500. I cannot remember a Latin American gold coin selling for more at auction.

This exact same price was realized by a Spanish-Mexican silver piece in the Millennia collection that is widely regarded as being one of three known of the initial strikings of ‘dollar-size’ silver pieces (Crowns or patterns of Crowns) in the Americas (North, South & Central). This piece is believed to have been minted in 1535 or ’36. Like the gold coin just mentioned, it was struck at the Mexico City Mint. It is hard to grade, though at a glance, it does not seem to have any serious problems and appears decent overall. The Millennia collection had a representative of the first Crown of South America. (Mexico City is in North America.) Eight reales ‘Pillar Dollars’ were first struck in Lima (Peru) around 1570. This circa 1570 Crown is NGC graded AU-55. The obverse (front) has lilac-gray toning and the reverse (back) has much blackish-gray color along with considerable brownish-russet and some lilac tones. This coin is not very dark. The toning seems to be natural and this coin has minimal contact marks. Business strikes of large coins are generally expected to have many contact marks and a few scratches. This Lima Mint Crown weighs 26.7 grams, about 0.94 ounce.

The first issue of Lima Crowns is a Great Rarity. As I have not previously examined one, I am not sure how to interpret this piece. Andy Lustig has been interested in Latin American coins for many years, and he travels continuously, in the U.S. and abroad, to attend coin shows and auctions. He has “never seen one before” either. The $276,000 price is probably an auction record for a Lima Mint Crown? I cannot resist mentioning one early British gold coin here, from the reign of King Edward III. It was minted between 1369 and ’77 and weighs 7.78 grams, a little more than a quarter of an ounce. It is a little lighter than a U.S. $5 gold coin. It is not very rare, as small hoards of Edward III gold coins have been found. Though not a large coin, it was the standard gold denomination of the period. This specific coin was lot #276 in the auction, and sold for $13,225 to a floor bidder.

This Edward III gold coin is certified as “MS-65” by the Numismatic Guaranty Corp. (NGC). Though an MS-65 rating for a coin from the 1300s is really neat, I contend that its true grade is a mid range MS-66. The details and centering of the strike are excellent. Zero contact marks and zero scratches are noticeable under five-times magnification. Even under twenty-time magnification, only slight imperfections can be found. It probably has never been cleaned. It has perhaps been lightly dipped just once, and has naturally and evenly retoned. The touches of orange-russet toning, especially about the outer design elements, are especially appealing. It is hard to imagine a gold coin from the 1300s being of higher quality. It is more than very attractive and is pleasantly startling.

While the standard gold coins of Edward III are not very rare, Queen Anne ‘Vigo’ Five Guineas gold coins are Great Rarities. Please see my separate CoinLink article about the one in this sale, which is lot #354. For this ‘Vigo’ Five Guineas, bidding opened at around $170,000 and several players competed until a telephone bidder beat a collector on the floor and took it for $414,000. It is fairly and logically NGC certified ‘MS-61 Prooflike.’ Most of the coins in the Millennia collection are certified, graded and encapsulated by the NGC. Though not nearly as famous as the Queen Anne ‘Vigo’ Five Guineas, an Austrian commemorative gold piece realized a much greater amount. On the obverse (front), there is a bust of Emperor Maximilian I, who ruled from 1490 to 1519, and, at some point, formally became the monarch of the Holy Roman Empire. Many societies that are now parts of Italy, France, Belgium, Switzerland and the Netherlands were in his domain, which changed during his reign.

This gold piece and related silver pieces commemorate Maximilian’s first marriage, in 1479, to Mary of Burgundy. This marriage is important in European history for reasons that are outside the present scope.

This Maximilian I gold piece received considerable attention during lot viewing sessions. Its actual appearance is more interesting and more attractive than the pictures of it in the catalogue. It is sharply struck on a choice planchet (prepared circular blank). Hairlines from a very old light to moderate cleaning are hardly visible to the naked eye, though do become apparent under magnification. Even with five-times magnification, it is hard to find more than one barely significant contact mark. Plus, it is truly uncirculated. The NGC grade of MS-63 is certainly reasonable.

Charles Browne is a leading expert in U.S. coins and he dabbles in European coins. Browne declares that this Maximilian I “gold piece is overly impressive, is well preserved, and is a beautiful piece of artwork.”

Jim Elmen is a widely recognized dealer in European coins and he “has been collecting Renaissance items for more than thirty years.” Elmen cites a recognized European expert who catalogued this exact same piece in the 1980s and stated that it is one of three known in gold. Elmen is “of the opinion that it is a true coin,” not a medal, and that “it was minted between 1511 and 1520.”

On May 26, 2008, it realized $632,500, an astonishing price, probably more than three times its previous auction record. Ira Goldberg reveals that “it sold to an Italian.”

I wonder if any Italians purchased ancient Roman gold coins in this sale. A Roman gold coin depicting Brutus, dated to “42 B.C.,” sold for $661,250. Brutus is a famous figure in ancient history, though is perhaps much more famous as a character in a historical play by William Shakespeare, Julius Caesar, which was published in 1599. Indeed, if it were not for Shakespeare, very few people would remember that Brutus was a politician in ancient Rome. This gold coin weighs a little more than eight grams (about 0.283 ounce).

An auction record for a Roman coin may have been set when another gold coin, this one weighing 6.31 grams (0.22 ounce), sold for $920,000. This Roman coin is easily remembered as the Roman coliseum, the most famous amphitheatre of all time, is illustrated on the reverse (back of the coin). The obverse (front) depicts Severus Alexander, who was Emperor of Rome from the years 223 to 235 A.D., more than 1750 years ago. It is one of only two known of this type.