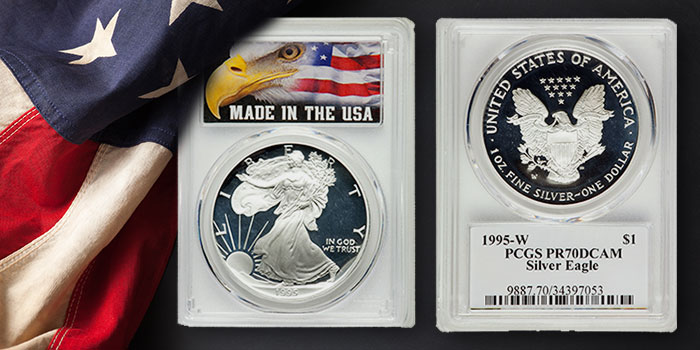 Heritage is offering a Showcase Auction of Modern Collectible US Coins and Bullion, with bidding open now and continuing through a live session scheduled for 6 PM CT on Tuesday, June 29. This auction features an excellent selection of collectible US Bullion coins, along with a smattering of other modern issues.

The United States Mint celebrated the 10th anniversary of the American Eagle bullion program in 1995 by issuing a special Proof Set consisting of a Silver Eagle and the four denominations of Gold Eagle. The set was issued by the West Point Mint, at a price of $999. Sales were limited, and only 30,125 sets were produced. There was little special about the gold pieces in the Proof Set, since those coins could all be purchased separately from the West Point Mint. However, the 1995-W Silver Eagle was only ever distributed as part of the set, making it a great key date in the series today. This auction features an example graded Proof 70 Deep Cameo by PCGS – the ultimate grade for this key date. It is flawlessly preserved and brilliant, showcasing stark white-on-black contrast and stunning eye appeal.