Within the upcoming Fritz Rudolf Künker Berlin sale, to be held on January 29, 2015 a small series of early gold coins from the United States of America is included.

You see, the gold 1, 5, 10 and 20 dollar pieces are testimonies to the different kinds of gold rushes; From the first in North Carolina in 1799 to the gold rush of Georgia in 1828, and of course the most famous California Gold Rush.

Below is a Video and full list and a bit of history from Künker about these items…..

The First Gold Coins in the United States

Carolina, Georgia, California – A great many people were lured by the prospect of easy riches in the gold fields to set out for the unknown. Consequently, the Gold Rush has become one of the seminal myths of the United States of America. In its Berlin auction Künker offers a range of numismatic testimony to this eventful era.

The Gold Rush which helped America attract settlers from all over the world began unspectacularly: the son of the renegade soldier Johannes Rheidt from the German region of Hesse found a rock that was, at first, used as a doorstop in a farm house. Only three years later a jeweler bought it for $3.50. This was merely a fraction of its true value, as the rock consisted of pure gold. Yet it was enough to inspire the Reeds, as the Reidt family had renamed itself in the New World, to continue searching. On their land they discovered a profitable gold vein which made them rich. The Reed Gold Mine was in operation until 1912.

The Reed family’s experience was only the beginning. The whole of North Carolina became known as a “gold state” where “large lumps of precious metal were found”. These lumps attracted thousands of immigrants who wanted to make their fortunes. They came from the British Isles, from Germany, from Poland and a number of other countries. As many as 30,000 people worked in the gold fields at the phenomenon’s peak.

With rich gold finds on the one hand, but difficulties with the cash supply on the other, economic life was not easy in North Carolina. Another immigrant from Germany, though, had a brilliant idea. Christopher Bechtler (1782-1843) of Pforzheim came to America in 1829. He was a watchmaker, and developed a lucrative business concept in the gold fields of North Carolina. He bought gold found at the mining sites and used it to mint gold coins, which he subsequently sold at a high profit (lot 811 and 812). These coins were quickly established as a widely accepted currency due to the fact that their gold content slightly exceeded their nominal value.

Bechtler and his family produced more than one million coins in denominations of $1, $2.50 and $5 which withstood the severe test of the United States Treasury. The government had realized that the private coinage had a higher gold content than the official versions. For this reason, the Bechtler Dollars were allowed to circulate. Nor did the Charlotte Mint which began operations in 1838 have a negative effect on Bechtler’s business. The minting continued until it was ended under his sons in 1852.

By that time, the monopoly on North American gold production which North Carolina had held for more than two decades was a thing of the past. Gold had been found in the Appalachian Mountains, in nearby Georgia. Beginning in 1829, gold seekers flocked to that state to make their fortunes. But the territory belonged to the Cherokee Nation, an unacceptable situation that was resolved in a “wild west” manner: the government confiscated the Native American land in order to distribute it among the white population. Anyone interested in a share was obliged to buy a lottery ticket for $10,000. Every single ticket was a winner. The owner was allocated a 40-acre parcel of land (161,880 square meters or 16,188 hectares, respectively) in the “gold lands”. The government provided, however, no guarantee that gold could be found on these parcels of land.

Nonetheless, in Georgia almost 2 million Dollars worth of gold was found between 1830 and 1837, an enormous sum of money at that time. But Georgia had the same problem as North Carolina: the amount of gold stood opposed to a shortage of cash. Sometimes it took up to three months to exchange gold for money at the official state bureau. Local gold buyers picked up the slack, and made a pretty penny when they bought the gold with cash, at a significant discount.

Bechtler became active in Georgia as well. He minted his gold Dollar coins with great success (lot 796). By the time the government mint at Dahlonega began operation in April 1838, the gold rush had already ended.

Georgia gold prospectors who had lost their income were among the first to start out for California in 1848, where gold had been found on the property of Johann August Sutter, a native of the German state of Baden. The story of the California Gold Rush has been often told and need not be recounted here. People flocked to the territory, which had only recently been seized by the US government. Among the newcomers were Chinese, British, French, Germans, Americans of course, and even some Cherokees that had been driven out of Georgia. Again, the gold seekers were faced with the problem of having enough gold but no cash. In this wave of the Gold Rush, the engineers Thomas H. Norris, Charles Grieg and Hiram H. Norris were the first to take advantage of that shortage, minting five-Dollar gold coins in 1849 (lot 807).

They were followed by companies such as Moffat & Co., where the New York metallurgist John Little Moffat initially produced small gold ingots which, however, did not win acceptance as a means of payment. Hence, Moffat used the US gold coins as models for his own coins, which were sometimes not easily distinguished from the originals. The legend on the obverse reads SMV (= Standard Mint Value) CALIFORNIA GOLD. In the diadem of Lady Liberty on the reverse, it was not her own name which was subtly hidden, but the company name “Moffat & Co” (lot 804 and 805). The same name also appears on an extremely rare 20 Dollar piece minted in 1853. The wording on the side in the coat of arms reads SAN FRANCISCO CALIFORNIA / TWENTY D. (lot 806).

Among the rarest coinages of this era is the emission of the Miners Bank, an institution on which comparatively little research has yet to be done, which was headed by Stephen A. Wright in San Francisco between 1849 and 1850 (lot 803).

On September 30, 1850, Congress decided to establish an official bureau for the assay and purchase of gold in California. There were as yet no firm plans for a US coinage, but the government commissioner August Humbert of New York, in cooperation with Moffat & Co., created the first official currency in California (lot 800 and 801). The reverses bear strong resemblance to contemporary watch cases, perhaps because Humbert was a trained watchmaker. In 1852, John Moffat left the company. A year later, Humbert was recalled as well, after Congress had decided in the previous year to open its own mint in San Francisco.

Yet the mint’s operational inauguration was delayed. One of Moffat’s former employees took the opportunity to mint gold coins under the name Kellogg & Co. until 1855, while the official mint was already releasing authorized gold coins (lot 802).

A minor footnote to the California Gold Rush is the coinage of the Mormon religious denomination, likewise brought about with California gold. Members of this religious movement had prospected in California and had brought their gold with them back to Salt Lake City. Thus an extremely rare emission of coins was produced, which depicts Mormon symbols such as the three-peaked Phrygian cap of the priest above the all-seeing eye of God (lot 814 and 815).

The gold rush of Pike’s Peak is barely known outside the United States. It occurred in 1858, and led to the foundation of Colorado three years later and the establishment of the US mint at Denver, which is still in operation. Roughly 100,000 gold seekers rushed to the southern Rocky Mountains to make their fortunes there. The territory of California Gulch alone, named in honor of the rich yield from the previous gold rush, produced gold worth 8 million Dollars. But only a few got rich.

The “Fifty-Niners”, as the first prospectors to arrive at the site were called, quickly exploited the superficial deposits. For systematic mining, however, most of the adventurers who arrived at the scene later lacked the financial means, equipment and patience. Only a few stayed to tap the subterranean gold deposits still being exploited by internationally-operated mining companies.

Yet again, the events of North Carolina, Georgia and California were repeated. At Pike’s Peak, too, there was more gold than cash available, and a private company, Clark, Gruber & Co. Bank & Mint, soon resorted to issuing coins in the denominations $2.50, $5, $10, and $20. This enterprise had been established in 1860 by the brothers Austin M. and Milton E. Clark, who had made their fortune by selling articles for daily use and groceries to gold hunters. On their coins they displayed the symbol of the gold rush, Pike’s Peak (lot 797), or copied the pieces Moffat had issued ten years earlier (lot 798). Clark, Gruber & Co. continued minting until 1863, when the US Treasury bought the company.

To this day, the mints at Denver and San Francisco bear witness to the legacy of the gold seekers, and the private coins issued between 1831 and 1863 offer numismatic testimony to one of the most intriguing periods in American history. 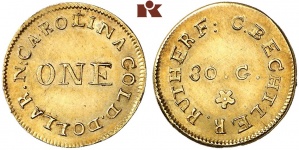 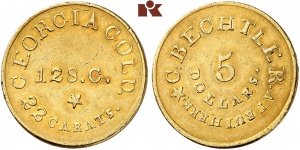 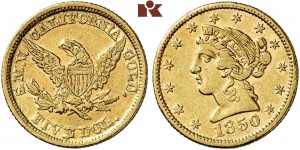 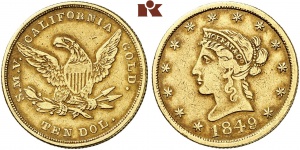 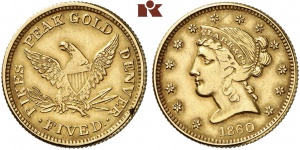 Do you have any questions?

If you have any questions or encounter any problems, please do not hesitate to give us a call. We would be glad to assist you.

With this newsletter you will receive regular, current information on dates and background, on the Künker Company and the world of numismatics, and on the contents, collection areas and items to be featured in coming auctions.