Legend Rare Coin Auctions’ Regency Auction 34 will be held on September 26 at the Bellagio in Las Vegas, Nevada. This auction will contain a wide array of US coins, including THE TYPE SET, assembled by Oliver Jung; The Hanover Collection of Lincoln cent varieties; and the Meridian Collection of proof Liberty nickels.

Between these three sets and the other coins included in the auction, there’s a huge range of pieces up for grabs, promising something for just about anyone looking for top-rate coins. While 1833 isn’t a particularly rare date for large cents, this piece is certainly a rarity. Graded a stunning MS66 RB by PCGS with a CAC sticker, this beautiful large cent previously found itself in the Naftzger and D. Brent Pogue collections. It is now being offered as part of Oliver Jung’s THE TYPE SET, the finest US type set ever assembled.

This piece is a supreme example of a late die state for this type, with heavy flow lines that weaken details near the edges. The denticles are particularly weak, as they were when first struck. The luster, however, is stunning for a red-brown coin and leaves little room for improvement. With only three others in this grade from PCGS and none finer, this piece is a must-see for the dedicated type or large cent collector.

More recently, this piece was last sold as part of the D. Brent Pogue Collection in 2016, where it realized $44,650 USD. The Hanover Collection of Lincoln cent varieties is a collection of over 200 different coins, ranging from 1909 to 2014. The most valuable pieces are included in the auction, while some of the less valuable specimens are available for direct sale.

One of the highlights of the collection is a 1944 D/S wheat penny in PCGS MS67 RD CAC. This variety is highly sought after, partially due to its inclusion in the Red Book. The overstruck mint mark is visible to the naked eye, adding to its appeal.

The specimen currently available is tied for the finest graded at PCGS, neither of which have ever sold at auction. It’s a virtually flawless coin, with bright red luster and smooth surfaces. The most similar piece that’s appeared at auction was an MS66+ specimen in 2013, which realized $21,150.

The PCGS price guide gives the MS67 RD a value of $55,000, while cataloguers have given an estimate of $35,000+. With no auction records for the grade, the final price is anyone’s guess, but it’s sure to bring some strong bidding from specialists. 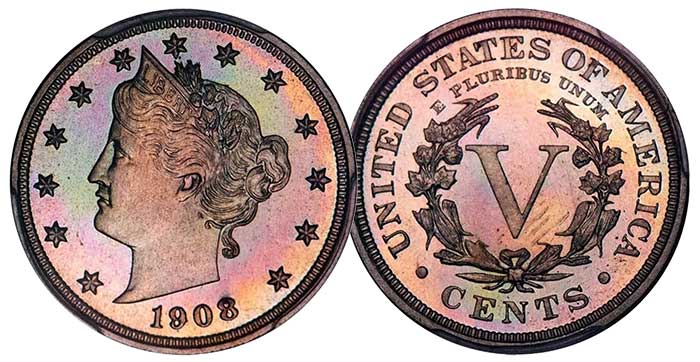 The assembler of the Meridian Collection has the larger goal to collect smaller sets of Proof coins from underappreciated series throughout US history, including Liberty nickels. These are now up for auction as the collector moves his focus elsewhere, returning countless gem cameo examples to the market.

While not the most valuable, one of the most eye-catching pieces in the catalog is a 1908 Liberty nickel in PCGS PR66+ CAM CAC. Based on the photos, this coin has surprisingly vibrant pink toning on both sides with hints of green and lavender. It’s uncommon to see such saturated toning on Liberty nickels, making it a stand-out in the collection.

It should also be noted that the auction photos from 2017 don’t show the toning, while an earlier 2014 auction shows them much lighter than the current sale. In 2014, it sold for $3,818.75. It will be interesting to see if the vibrancy of the toning in the auction catalog will encourage stronger bidding than the 2017 sale.

Even outside of these fantastic collections, there are plenty of amazing pieces in the sale. 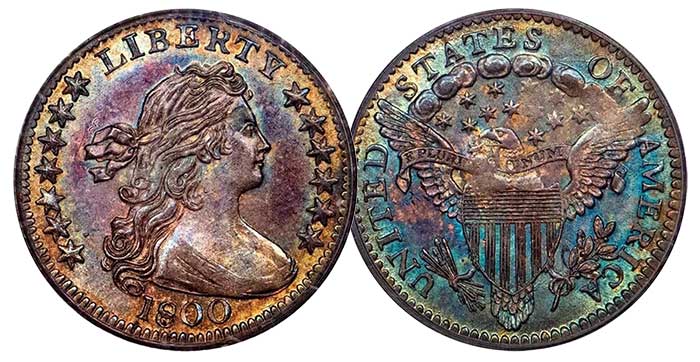 With no traceable provenance, we don’t know how long it’s been since this piece last appeared on the market. It’s graded PCGS MS65 in a Generation 3.1 holder, which was used from 1993 to 1998. No auctions of this coin in the slab can be found, which leads to the conclusion that it must have last been sold raw.

At any rate, it’s a phenomenal coin that is sure to make some waves. It is evenly toned, with primarily purple and gold tones on the obverse and blue on the reverse. The details are sharp, with the exception of weakness on the eagle’s right wing.

The LIBEKTY variety was created when a broken R punch was used to create the dies, resulting in an R the resembles a K. The variety is not mentioned on the holder.

The estimate is set at $42,000 or more, but in the description, the auctioneers state the belief that, due to superior eye appeal, it should sell for more than the MS65+ Norweb coin that brought $47,000 in 2015. In contrast to the unknown provenance of the half dime, this 1795 dollar has a record dating back to 1899. It was part of the E. W. Ropes Collection, which was sold by New York Coin & Stamp Co. in 1899. From there it went into the J. M. Clapp Collection, where it stayed until it was sold by Stack’s in 1942 to Louis E. Eliasberg.

It was sold with the Eliasberg Collection in 1997 and changed hands quite a few times between then and 2007, when it realized $212,500 without the CAC sticker. In fact, no CAC examples have crossed the auction block.

This piece is very clean, with an even, light color – typical of Eliasberg coins. It is the Three Leaf variety, which has three leaves on the branch on either side of the eagle’s feet on the reverse. This is the rarest Red Book variety for the date.

It has a PCGS population of seven with three higher, and an estimate of $280,000+. With inarguable eye appeal, this piece would be a fantastic addition to any collection of early silver dollars.