One of just 100 1875 Liberty Eagle. U.S. Gold Coin minted for circulation will be sold as part of a $10 Liberty set which is rarely completed

An 1875 $10 Liberty Eagle, the famous regular issue U.S. gold coin with the lowest circulation mintage ever recorded, highlights more than 2,000 lots in Heritage Auctions’ February 20-23 Long Beach Expo U.S. Coins Auction. Graded PCGS AU50, this famous gold rarity with only a tiny 100 pieces struck for circulation is expected to easily sell well into six figures as collectors seek to add it to their collections. 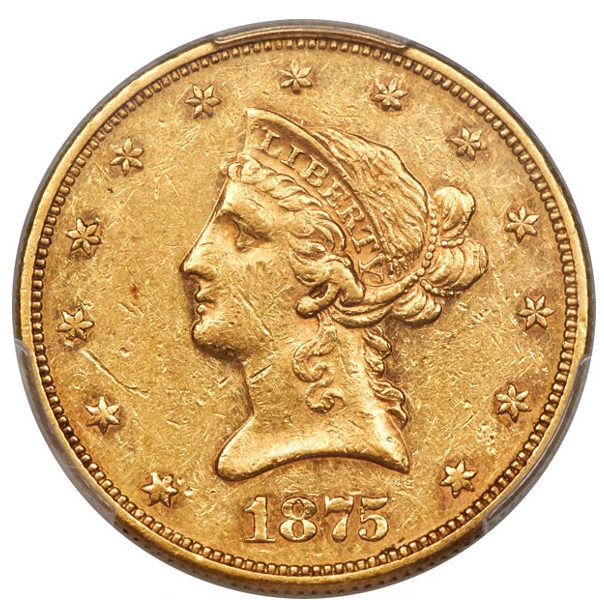 “Fewer than 10 pieces of the 100 1875 Liberty Eagle struck for circulation are believed to have survived in all grades,” said Sarah Miller, Managing Director of Numismatics at Heritage New York.

There was little numismatic interest in U.S. Gold Coin Liberty Eagles in 1875, as the coins were too expensive for most collectors to set aside. The few numismatists who did collect large denomination gold coins simply ordered one of the 20 proof examples struck that year to update their collections. As a result, almost no business strikes were saved by contemporary collectors and no Mint State examples have ever been publicly offered. There have only been 13 public offerings of this U.S. Gold Coin in any grade over the last 20 years, many of those being repeat offerings, and most of them are presently in strong hands, so future auction appearances may be even less frequent.

In addition to this U.S. Gold Coin rarity, Heritage is presenting eight special collections during the Long Beach Expo, with fresh-to-market coins not seen at auction in decades. Perhaps none more impressive than The Harvey B. Jacobson, Jr. Collection of Liberty Eagles. Like many numismatists, Jacobson collected coins as a teenager and continued his pursuit through high school. He still retains his long-held Mercury dime and Jefferson nickel collections, formed during the early 1950s. During the last 20 years, Jacobson was able to assemble an extensive collection of Liberty $10 gold pieces. His 100 percent complete set of U.S. Gold Coin Liberty Eagles, including the aforementioned key 1875, is one of the great challenges in numismatics–often attempted, but seldom achieved.

A Small California Cabinet: Offers an 1815/2 Half Dollar, Choice XF, a rare overdate, as part of its stunning Capped Bust collection. Many fine examples are featured in eminently collectible conditions, primarily in About Uncirculated and accessible Mint State grades, topping out at the MS64 level. As expected, a few of the rare Overtons are in well-circulated conditions, such as the 1807 O-111b “Bearded Goddess” certified VF20 NGC with CAC.

The Bert Mintz and Helen Mintz-Hittner Collection: This collection presents a marvelous selection of coins, which were assembled despite Mintz’s humble beginnings. One of the highlights of the Premier Session is a complete nine-denomination 1908 proof set. The minor and silver denominations (offered as a single lot) are represented by beautifully toned, well-matched coins in Gem to Superb Gem condition.

The Brookside Collection: Specialists in Charlotte gold should take note. Charlotte Mint gold is the focus of this long-standing collection of branch mint Liberty Quarter Eagles and Liberty Half Eagle gold. The coins are all in old green label PCGS holders, and they have been absent from the market for many years.

The McDonald Family Collection: Focused on rare gold and silver with a few old coppers mixed in, The McDonald Family Collection almost exclusively includes coins that circulated far and wide with dates, mintmarks, and varieties that are numismatic challenges. The list of early type is especially impressive: a 1794 dollar with VF sharpness – an American classic – plus an 1802 half dime, 1796 and 1797 half dollars, a 1793 Liberty Cap cent.

The Spring Creek Collection, Part III: Early type remains the focus of this collection, which was formed during the past 25 years. Its primary focus is on silver issues in the Bust, Seated and Barber series. It includes several “collector grade” Seated dollars and half dollars, plus Bust halves and Bust quarters.

The Stunning 1908 Proof Set: A standout in the Long Beach Expo auctions is a complete nine-denomination 1908 proof set. The minor and silver denominations (offered as a single lot) are represented by beautifully toned, well-matched coins in Gem to Superb Gem condition. The crown of the set is the matte proof Saint-Gaudens double eagle, graded PR66+ PCGS CAC, one of the top three examples certified at PCGS.

The Triplets Collection: This collection was formed around better dates and varieties, with the early type coins primarily in circulated grades, and the later issues ranging from Select Mint State to Premium Gem Uncirculated examples. Some of the key issues include a 1793 Sheldon-3 Chain cent certified Fine 12 PCGS, a 1916-D Mercury dime graded MS63 Full Bands PCGS, and a 1916 Standing Liberty quarter (nicely toned) in MS65 Full Head PCGS.