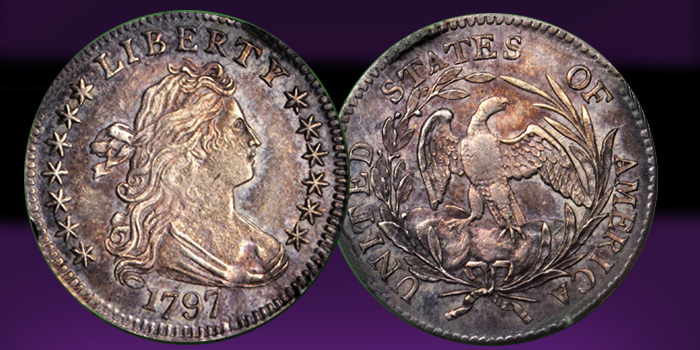 Featured in Stack’s Bowers upcoming October 2017 Collector’s Choice Online Auction is an incredible MS-64 (NGC) 1797 Draped Bust dime of the JR-2, 13 Stars variety. By a slight margin, JR-2 is considered the scarcer of the two varieties of 1797 dimes. The JR-1 variety marked the end of the policy to add a star to the obverse for every state in the Union, as the addition of Tennessee in 1796 had made obverses too crowded. JR-2 featured only 13 stars, an aspect that would remain constant for over a century.

This gorgeous example is dusted in soft shades of gold, violet, and powder blue that deepen toward the borders. The fields are silky, lustrous, and contrast nicely with the more frosty texture that blankets the design elements. Evidence of doubling is noted on Liberty’s profile, as well as on the date and reverse legend. The overall preservation is truly exceptional, with just a few microscopic ticks visible beneath a glass. Obstruction of the dies during striking has imparted an arcing flaw to the right of the date, allowing for a convenient pedigree marker. PCGS CoinFacts suggests that just five Mint State coins exist, which is corroborated by the three examples certified by PCGS and the two examples certified by NGC.

The present example is tied with the Pogue specimen offered in lot 1036 of our May 2015 sale, which brought $176,250. While the Pogue specimen has been part of some of the most impressive cabinets assembled over the past century, the present example has been offered at public auction only twice in the past 50 years. Its provenance can be traced all the way back to Abe Kosoff’s ANA Auction of August 1968 where it sold in lot 1374 for $1,704.35.

This near-Gem 1797 dime will be featured in our October 2017 Collector’s Choice Online Auction, which will offer a selection of foreign coins in addition to U.S. coins and paper money. Call us today at 1-800-458-4646 to consign alongside this exciting rarity. Also, download our mobile app to participate via your Android or Apple device. Email [email protected] for more information.