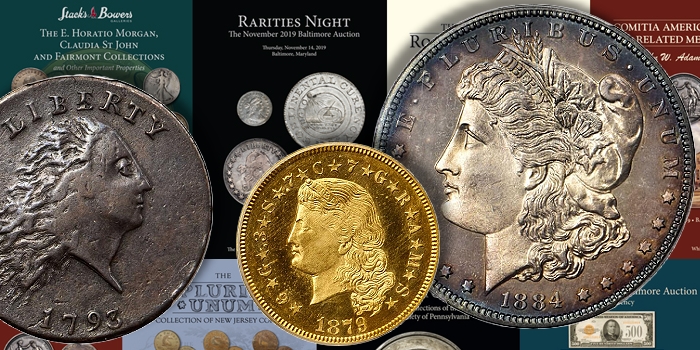 At the 2019 Whitman Expo in Baltimore, Maryland, Stack’s Bowers will be auctioning a large assortment of George Washington exonumia alongside a curated selection of federal US coinage. Stack’s Bowers’ Baltimore sale will be conducted in four live sessions between November 14 and 16 at the Baltimore Convention Center. Any large cent collector is sure to notice the 1793 chain cent that will be sold during the Rarities Night Baltimore sale. This is the most common of the three main varieties of chain cent but is a delightfully problem-free, mid-grade example.

Chain cents were among the first coins produced at the new United States Mint in 1793 but were minted for less than a month before the design was changed. The depiction of Lady Liberty on the obverse intended the flowing hair to represent freedom, but critics felt she looked disheveled and wild. In addition, the chain on the reverse was meant to symbolize the unity of the 13 states but was more often associated with slavery. As a result, it was soon changed to a wreath, ending the chain cent’s short run.

Less than 40,000 chain cents were minted, and most saw extensive circulation. High-grade pieces are few and far between, and problem-free examples even in low grades can be hard to come by.

At VF30, this piece is a solid mid-grade example with no major issues.

Planchet quality varied among early copper, but this one appears to be struck on a well-formed planchet. The lettering and chain are sharp, with all major design elements clear and crisp. Wear is evident on the portrait of Lady Liberty, but it doesn’t interfere with the visibility of the design and remains a solid example of the coin. This would make an excellent addition to a type set. The Stella was created in 1879 as the US considered aligning our coinage with that of the Latin Monetary Union. In Europe, a treaty in 1865 united the currency systems of multiple countries so they could be easily exchanged. One franc from France was equal to one lira from Italy, one peseta from Spain, or one drachma from Greece, making trade between the participating countries easy.

As it stood, the American coinage system didn’t fit into this exchange well at all, making it very difficult to convert US coins into European currency. Multiple denominations were proposed to help the US fit into this system, but the most well-known was the Stella.

With a modified “goloid” composition, it was intended to be equal to the French 20 franc coin, fitting in nicely with the Latin Monetary Union for trade. Two different designs were suggested, differentiated by the hairstyle, and the Flowing Hair type seen here was generally preferred. It saw a mintage of somewhere between 425 and 800, depending on the source. The denomination was never officially adopted but is still avidly collected as a rare gold type coin.

While all Stellas were produced as proofs, many spent the beginnings of their lives as pocket pieces or mounted in jewelry, resulting in pieces now graded as low as PF30 at PCGS.

However, the piece currently up for auctionat the Baltimore sale is a beautiful PF65 Cameo example. With sharp contrast between the fields and devices, this coin is sure to be a highlight of the sale. There are 23 cameo pieces graded higher at PCGS, topping out with a single PF67+ Cameo example.

Recent auctions for PF65 Cameo examples have realized close to $200,000.

Here’s something you don’t see every day: A full 1884 proof set, all graded between PCGS PF64 and PF66 with CAC stickers. In 1884, US Mint customers could purchase full proof sets or sets of only minor coinage, resulting in higher mintages for the cent through nickel. Only 875 full proof sets were produced. This set includes every denomination dollar through cent, with the exception of the trade dollar, of which only 10 were minted and six survive. They weren’t included in proof sets purchased by the public, meaning this set is complete as a consumer would have purchased it from the Mint in 1884.

All of the coins fit together well, with all silver pieces exhibiting some toning without sticking out. While we can’t know if these specific coins were originally sold in the same set, they undeniably fit together now.

Value-wise, the star of the set is the PR64 Cameo Morgan dollar, which exhibits rich toning around the edges that gives way to bright devices.

Looking at population reports, the PR66 Seated Liberty quarter has only 15 graded higher at PCGS, making it worth an additional note. It is richly toned, primarily in blue, and matches perfectly with the half dollar and dime.

The nickel coinage is clean and bright, with a particularly pleasing three cent piece in PR66.

Finally, the Indian Head cent seems to exhibit similar blue tones on the obverse as the Seated Liberty coinage, tying the set together nicely. Together, these pieces have a collective PCGS Price Guide value of over $11,000.

A significant portion of the Baltimore sale is composed of an assortment of Washington medals, including sessions for Washingtoniana from the Collections of the Historical Society of Pennsylvania featuring the Collection of William Spohn Baker, and the John W. Adams Collection of Comitia Americana and Related Medals. One piece from the Historical Society of Pennsylvania Collection is an 1800 Washington Funeral medal with the skull and crossbones reverse. After Washington’s death on December 14, 1799, Jacob Perkins created two different styles of funeral medal that were sold to attendees of his two funeral processions. The first ceremony, on February 11, 1800, was the Masonic procession, and many of these medals were sold to other freemasons. They were intended to be worn around one’s neck, and so have a hole at the top.

The more common design features an urn on the reverse, while the rarer type has a longer reverse legend and small skull and crossbones. This piece is the latter, though both are available in the auction. The skull and crossbones design was easier to strike because the two highest points of the design weren’t directly opposite each other.

Only 11 skull and crossbones medals have been certified by PCGS, topping out with this baltimore sale AU55 example. Only one other example at PCGS has been certified in AU – an AU53 piece – and all the rest in XF40 or lower. The XF40 example currently holds the auction record at $41,125 in 2014, and it’s almost certain that this piece will eclipse that.

The obverse is darkly toned, though it has an assortment of colors in the fields. The reverse is lighter, taking on a primarily gold tone with splashes of rose and green. It’s a gorgeous example and among the best extant.

Plenty of other fascinating Washington-related medals are available in the baltimore sale, and it’s a must-see for any collectors of Washington exonumia. The selection of US federal-issue coinage, while smaller, also includes many gems worthy of attention. All lots are now available for online bidding.