Stack’s Bowers Galleries is the only official ANA auctioneer for 2013, and will present the first of their two ANA auctions for the year with the May 7-11 Official Auction of the ANA National Money Show in New Orleans, La.

“Get set for one of the most important auctions of the season,” noted Chris Napolitano, president of Stack’s Bowers Galleries. “Our New Orleans sale as official auctioneer for the ANA National Money Show will contain many scarcities and rarities across the board. Long-hidden coins consigned by a New England museum will attract a lot of attention, as will other pieces, some of which are among the finest known.”

Old-time collections always add excitement, and two important ones will anchor the auction. Heirs of Dr. Dexter C. Seymour — whose research on Georgia territorial gold coinage revolutionized the way today’s collectors view Templeton Reid – have consigned his cabinet, ranging from a Reid $2.50 rarity to California gold to federal issues. The catalog will include a biographical appreciation of Dr. Dexter by David L. Ganz. 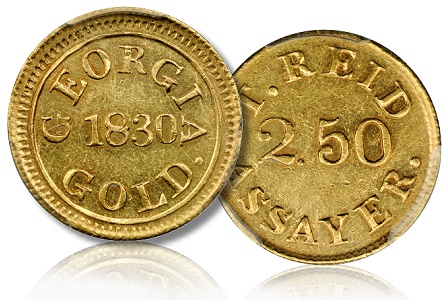 Consigned by a New England museum are coins from an old donation that have been off the market for likely more than century. The collection spans from the 18th century, to the very early 20th century, with a selection of beautiful Proofs highlighted by a Superb Gem 1895 Morgan dollar. The consignment includes many circulation strikes as well, in nearly every case being of outstanding quality, many crossing the MS-65 mark. It was a delight to receive the collection in a mix of paper envelopes and Raymond holders in which some of the coins had been placed in the 1930s. The coins are consigned without reserve, and the funds generated will be used to develop the museum’s collections in areas better meeting the goals of the institution. This will include future purchases in the area of ancient numismatics. “We have handled many museum and estate collections over the years, a specialty, but not often have the coins been in hiding for over one hundred years,” said Brian Kendrella, chief operations officer for Stack’s Bowers.

Copper and nickel coins from various consignors include type issues, scarce dates, and condition rarities. A Gem Proof 1864 Small Motto two-cent piece, seldom seen at any level, will attract wide attention. Silver coins range from the 18th century onward and include many key pieces, including a beautiful Proof 1833 Capped Bust quarter, an American classic. Among Capped Bust half dollars, a premium Gem 1811 will delight advanced specialists. Silver dollars are highlighted by a Gem 1839 Gobrecht and all of the key Morgan dollar dates and mintmarks.

Gold coins include many notable pieces in all series from dollars to double eagles. Quarter eagles include an 1804 with 14 Star reverse in Mint State, an Ultra Gem Proof 1884, and a premium Gem Satin Finish Proof 1910. One of the most famous American gold rarities, an 1879 Coiled Hair $4 Stella, is represented by a gorgeous Proof. Worldwide attention will be focused as this crosses the auction block. Half eagles are likewise important and range from early dates to late. Eagles follow suit and include a Mint State 1883-CC, the sole finest graded by PCGS. The MCMVII is a standard in Stack’s Bowers sales, and in New Orleans an Ultra Gem MS-67 certified by PCGS and also with a CAC imprint is certainly one of the finest to be sold in our time. The California Gold Rush is represented by a lustrous 1852 octagonal $50 slug.

While rarities are exciting, the sale will contain a wide selection of popular and affordable issues, including Morgan silver dollars, commemorative coins from the classic era including many in extraordinary condition, type coins from all eras, and more.

The American Numismatic Association’s National Money Show will be a magnet for collectors from all over America as well as other countries. The multiple sessions of the Stack’s Bowers Galleries auction are a drawing card, as ever, but a large bourse, educational forums, and other attractions fill in several days of numismatic enjoyment and immersion. The convention runs May 9-11 and many of the Stack’s Bowers team will be on the bourse floor and in the auction gallery.

Stack’s Bowers Galleries, a division of Fortune 500 Company Spectrum Group International Inc., combines the extraordinary histories of Stack’s, the oldest rare coin auction and retail company in America, with Bowers and Merena Auctions, one of the world’s preeminent auctioneers of rare coins and paper money. The two companies unite to share a combined legacy that spans more than 100 years, and includes the cataloging and sale of many of the most valuable collections to ever cross an auction block — the John J. Ford, Jr. and Louis E. Eliasberg, Sr. Collections, The Harry W. Bass, Jr. Collection, and The Norweb Collection — to name just a few. Topping off this amazing numismatic history is the inclusion of the world record for the highest price ever realized at auction for a rare coin: the1794 Flowing Hair Silver Dollar graded Specimen-66 (PCGS) that realized over $10 million. The company is headquartered in Irvine, California, with offices in New York, New Hampshire and Hong Kong. Stack’s Bowers Galleries is the Official Auctioneer for several important numismatic conventions, including the 2013 ANA World’s Fair of Money and the ANA/PNG Pre-Show, the 2013 ANA National Money Show, and the Whitman Coin and Collectibles Baltimore Expo, three times yearly.