Stack’s Bowers will host a series of auctions at the 2019 ANA World’s Fair of Money in Chicago, featuring everything from US coins to ancients. Included in the auctions will be three particularly noteworthy collections, built around Capped Bust $10 gold eagles, German talers, and proof Flying Eagle and Indian Head cents.

The Taraszka Collection is one of only two known full sets of Capped Bust eagles, including every date and die variety from 1795 to 1804. A total of 41 pieces are being offered, all graded by PCGS and ranging from one XF45 up through MS63.

Included in the offering is a semi-prooflike MS63 example of the 1795 BD-3 Nine Leaf variety, the key date of the small eagle series. This is one of only two examples graded MS63 by PCGS with one higher in MS63+, which sold for just over $1 million in 2015. Dannreuther believes that only 20 to 22 coins have survived from this die pair, making it a rarity in any grade. It wasn’t until recently that this variety achieved the great notoriety it now enjoys. The first recorded sale of a Nine Leaf specimen wasn’t until 1926, and a second example wasn’t found until 1960. Even by 1980, according to David W. Akers, there had been little publicity for the rarity. In recent years it’s become much more well-known and is now a key date of the series.

Capped Bust eagles originally had 13 leaves on the reverse, and it’s thought that the Nine Leaf variety was an experiment, perhaps to make the reverse less crowded. The reverse die didn’t last long, exhibiting die breaks on all known examples, and the design later changed to 11 leaves.

To accompany it is, of course, the key date of the heraldic eagle series – an 1804 BD-1 Crosslet 4 in MS61. Mintage numbers for this issue aren’t known for sure, but it’s believed that somewhere between 2,500 and 3,757 were struck, though less than 100 are thought to have survived. This is the only MS61 example of this variety graded by PCGS with only one higher in MS63+.

The entire collection is filled with coins of incredible rarity and condition. Anyone even remotely interested in the series should give it a look, if not to bid, then simply to appreciate the great collection put together by Anthony J. Taraszka. It will be auctioned on Thursday, August 15, starting at 6:00 PM.

This stunning collection includes many of the top-graded proof examples of Indian Head cents and is currently the top registry set in existence. A lovely compliment to the high-grade MS Indian cents being offered by Heritage at the show, there are sure to be plenty of collectors present. 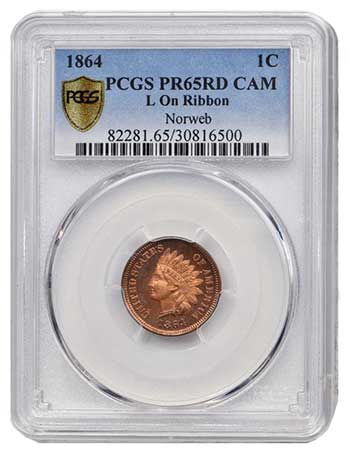 One of the highlights is the only Deep Cameo 1863 proof cent certified by PCGS. Graded PF65 DCAM, this beauty was last sold in 2017 at Heritage’s US Coin Signature Auction in Dallas, Texas, for $15,275. It’s rare to see a copper-nickel proof cent with such strongly frosted devices, which provide a stark contrast to the mirrored fields. There are higher-graded specimens without the deep cameo designation, but with an estimated mintage of only 460 coins, this is surely one of the most eye-catching examples that have survived.

Also offered is an 1864 Bronze L on Ribbon cent in Proof 65 RD Cameo. None are graded finer by PCGS, and it’s believed that only 30 to 35 pieces exist in total. This specimen is the Snow-PR2 variety, which is believed to be a restrike from 1871 and accounts for roughly half of the known specimens.

Q. David Bowers offered a possible explanation for the mintage numbers in 1996. The L on Ribbon design was only introduced late in 1864 and was not announced in any way. Since most proofs were ordered earlier in the year, few people ordered proof cents after the design change. Based on auction catalogs, it wasn’t until 1871 that the design change was noticed, so suddenly collectors wanted a proof example of the 1864 L. There were so few available that the United States Mint decided to restrike a few to sell, using an existing reverse die and new obverse die. While not proven, this explanation is backed up by mintage numbers, catalog data, and die diagnostics.

The ESM Collection will be auctioned on Thursday, August 15, starting at 7:00 PM, following the Taraszka Collection.

The Linda Collection of European Coins

This collection includes primarily German Talers with only a few other denominations, including three gold coins, and pieces from Belgium, Italy, and Austria. They are from the mid-1300s through 1824, with most from 1600 or later. It’s a collection of coins that drip with history. Some of particular interest include an exceptionally well-struck Belgian Chaise d’Or from 1346-1384. In MS65 with a beautifully centered and complete strike, this piece is hard to beat. It’s the single-highest-graded coin by either NGC or PCGS and would make a beautiful centerpiece to any world coin collection.

Another eye-catching piece is the diamond-shaped 1621 Uniface Klippe 3 Taler, graded MS63 by NGC. This piece was minted by German Protestant rebels in the 30 Years’ War. It features a central stamp made by the die for a ¾ Taler and two small stamps above and below. All of the stamps are well-centered and detailed for the issue, which is accentuated by blue toning in the recesses. Tied with two others for the highest grade at NGC, this piece is undoubtedly a conversation-starter.

One coin worth highlighting doesn’t have a photograph yet on the Stack’s Bowers website, though it does include a link to its certification details on the PCGS site. This 1664-HS German 1 ½ Taler from Brunswick-Wolfenbuttel in AU55 is a beauty to behold with incredibly vibrant “cobalt, burgundy, burnt sienna, and light violet” toning. It’s one of only two graded by PCGS, the other in VF35. An AU55 example graded by NGC sold in January of this year for $2,520, but it was no comparison to the current offering. The remarkable toning truly sets this piece apart.

The Linda Collection will be auctioned on Friday, August 16.

Stack’s Bowers will be auctioning a plethora of other rare and interesting pieces outside of these collections with multiple auctions held every day of the show through Friday. Online bidding for some sections of the sale has opened, while others are still in preview on the Stack’s Bowers website.