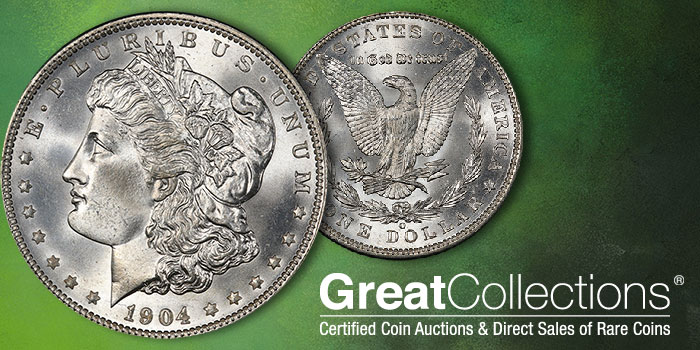 Yesterday’s auction (Sunday, November 24) on GreatCollections.com featured this 1904-O Morgan dollar, graded MS-67+ in a gold shield holder by PCGS and approved by CAC. After 29 bids, the price realized was $20,501, and it’s not hard to understand why.

Business strike Morgan silver dollars from the New Orleans Mint were typically weakly struck and don’t usually come nice at all. So when a top pop example–PCGS has graded two at 67+ with none higher–hits the market, it’s sure to generate excitement among collectors of the perennially popular series.

As for past auction prices, there are no records for a PCGS MS-67+ (records for NGC-certified pieces just don’t apply here). However, if we look at results for regular MS-67s, we see a recent high of $15,275 for a CAC-approved example in September of this year. Non-CAC coins have sold for considerably less, with another MS-67 specimen selling in the same auction for $2,820! In May, a similar example sold for $2,640, and another non-CAC MS-67 1904-O garnered $3,000.

If you want to check GreatCollections for sales of the 1904-O–or any other coin, for that matter–be sure to check out the GreatCollections Auction Archives, with records for over 600,000 certified coins the company has sold over the past seven years.

Background of the 1904-O Morgan Dollar

The Morgan dollar is named after United States Mint Assistant Engraver George T. Morgan. The obverse depicts a profile portrait representing Liberty with a wreath of agricultural products important to the United States, while the reverse depicts an eagle with wings outstretched, influenced by Italian Renaissance designs.

As mentioned above, Morgan silver dollars struck in New Orleans tended to have a weak strike and see more wear than other branch mint coins. This was a fact through the entire run of the series.

Always a popular coin with American collectors, the release of millions of Morgan dollars from Treasury Department vaults in the 1960s and ’70s radically reshaped what we knew about the condition and survival rates of these coins. The 1904-O was one of the most affected, going from one of the rarest dates to one of the most common. Even in high Mint State, the 1904-O Morgan dollar is relatively common. But at top pop levels, it is once again a rarity.