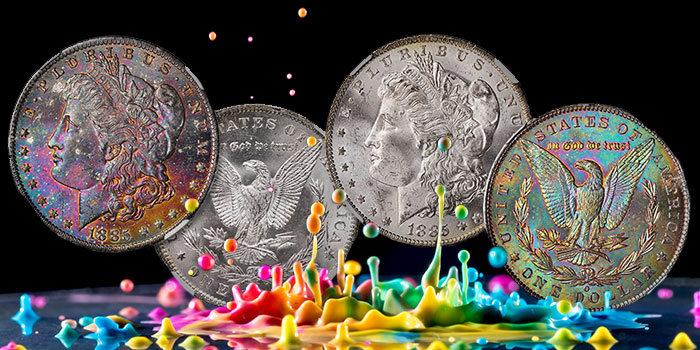 The 1885-O is among the most popular New Orleans Mint Morgan silver dollars. The mintage of 9,185,000 pieces was typical of the era, but still well below the 10.7 million struck of the 1886-O and the 11.5 million struck of the 1887-O. The Bland-Allison Act of 1878 required that the United States produce significantly more silver dollars than necessary during this time, which resulted in most 1885-O dollars being placed directly into storage.

Demand for these coins did not arrive until five decades later when the nation began to recover from the Great Depression of the 1930s. By this time, however, millions had been melted as a result of the 1918 Pittman Act, significantly reducing supply. These decades in long-term storage provided the ideal conditions for colorful toning to develop on some survivors, although the vast majority remained brilliant.

1885-O dollars continued to be released from Mint and Treasury Department vaults over the following 30 years, though millions more would be melted during the rise in silver prices in the late 1970s. Today, the 1885-O is in strong demand among both specialists and type collectors, with the colorfully toned among the most prized of the issue.

Stack’s Bowers Galleries is thrilled to feature two of these spectacularly toned 1885-O Morgan dollars in our December 2020 Showcase Auction, both graded MS-66 * by NGC.

Lot 2280 features a blend of magenta, electric blue, forest green, and tangerine on the obverse. The reverse is largely brilliant with subtle golden hues at the upper left border. Satiny and somewhat reflective luster emphasizes the vibrant coloration.

Lot 2281 displays vibrant emerald green and orange toning on the reverse. The obverse is brilliant with just a hint of gold at the rims. The luster is rich and frosty, nicely undisturbed across the highest points. A similar MS-66 * (NGC) 1885-O dollar sold for $4,406 in our November 2014 auction, and we expect equally intense bidding when these two lots cross the block in our December sale.

This pair of toned Gem 1885-O Morgan dollars is offered in Session 2 of our December 2020 Showcase Auction, which opens for live bidding on Friday, December 18 at 1:00 PM PT. These will be presented alongside the magnificent Larry H. Miller Collection, Part II and additional selections from the Naples Bay Collection.

The entire Stack’s Bowers Galleries December sale is now available for viewing and bidding at www.StacksBowers.com. If you would like to consign to a future Showcase event or have questions about the consignment process, contact us today at [email protected] or 800-566-2580.