It is fascinating how events in two different countries on different sides of the world can affect a third on an entirely different continent. We live in a truly interconnected world. What am I talking about? Apartheid and Austrian gold. By the mid-1980s, South Africa’s system of racial segregation called Apartheid had a massive impact on the international sales of their gold bullion coin, the Krugerrand. However, prior to this international backlash, the Krugerrand was the most successful gold bullion coin in the world, accounting for 90% of the global market in 1984. Between 1976 and 1984, South Africa earned over three billion dollars by exporting these coins. 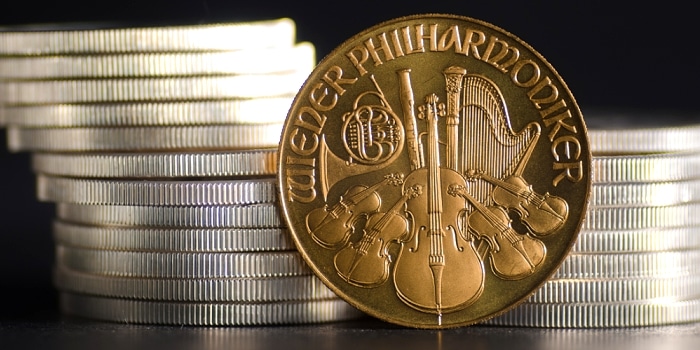 In 1986, after mounting domestic pressure, the United States Congress overrode President Ronald Reagan’s veto and issued economic sanctions against South Africa. Shortly thereafter, Reagan ordered an importation ban against the Krugerrand. This, along with the reaction of other international actors, forced South Africa to dramatically scale back the mintage of the Krugerrand from over 3.3 million in 1984 to just 100,000 pieces in 1987. The global market did not, however, stop demanding gold bullion, especially in the form of coins. As a result, the Royal Canadian Mint and the Chinese mints ramped up their own production capabilities of 1 oz coins significantly. From 1983 to 1986, Canada increased production by 57% and China by nearly 325%. Additionally, the American Gold Eagle was first released in 1986.

This is where we come to Austria. While the United States had been planning the Gold Eagle since the passage of the Gold Bullion Coin Act of 1985, Austria did not start planning the launch of a gold bullion program until 1989. This was also the year that the Austrian National Bank took over the Austrian Mint, shortly after which they ordered the engraving department to design an investment-grade 1 oz gold coin. That meant that the metal needed to be “four 9s”, or 99.99% pure.

Headed by Chief Engraver Thomas Pesendorfer, the Mint’s Design Department worked through a number of ideas, including famous religious buildings like St. Stephen’s Cathedral and Melk Abbey; traditional Austrian clothes like the Upper Austrian bonnet; and a possible musical theme. As one of the most recognizable symbols of Austrian music, Pesendorfer wanted to feature the Wiener Philharmoniker – the Vienna Philharmonic Orchestra. Here is where the story hits an interesting quirk of history. When Pesendorfer asked the entrance attendant in the Music Hall’s waiting room to be able to meet the Orchestra’s secretariat, she did not believe his reason and refused him entry. This was because the Vienna Mint was keeping the project secret, so Pesendorfer could not back up his informal appeal with an official request.

Luckily, the wife of a board member overheard this exchange. After she discussed it with her husband, he decided to investigate. Later, Clemens Hellsberg, the conductor, reached out to Pesendorfer with an official invitation. After consulting with Hellsberg, Pesendorfer decided to create an obverse design that highlighted the Philharmonic’s greatest instrument: the pipe organ.

While the original was installed in the Wiener Musikverein (Vienna Music Hall) in 1870, the current instrument was built in 1904. Originally created by royal court organ manufacturer Gebrüder Rieger, the instrument was severely damaged by a hand grenade in 1945. While it was repaired in 1948, the organ would receive a massive overhaul in 2011. After what amounted to a complete redesign, the instrument boasts 6,138 pipes and 81 electronic stops.

As the main theme of the obverse design, this organ fills most of the available field space. Arcing over the massive, ornate instrument is the issuing state (REPUBLIK OSTERREICH) and below it in three lines the weight and purity of the metal, the date, and the denomination.

On the reverse is depicted a cluster of instruments in two lines: four violins and a cello in the first row, and a harp bassoon and a Vienna horn in the second. Above the instruments is the legend WIENER PHILHARMONIKER (“Vienna Philharmonic”).

Only one change has been made to Pesendorfer’s original design for the gold coin: the addition of a raised rim, called an edge rod, to allow for easier stacking.

That first year (1989), on October 10, the Austrian Philharmonic gold 1 oz and ¼ oz coins were released. Initially denominated in Austrian Schillings, the 1 oz was worth a face value of 2,000 schillings and the ½ oz was worth 500 schillings (at the time, 2,000 schillings was the highest denomination of any gold bullion coin in the world). The 1 oz coin is 2 mm thick, has a reeded edge, and measures 37 mm across. As stipulated by the National Bank, it consists of one troy ounce of 24-carat, 99.99% pure gold, the weight and purity guaranteed by the Austrian Mint. Later–in 1991 and 1994, respectively–the 1/10th and ½ oz versions were first released.

By 1990, the Philharmonic gold piece was the best-selling bullion coin in Europe and the second-best in the world. During the first year of production, the Austrian Mint struck 351,000 of the 1 oz coins – an amount second only to the Royal Canadian Mint’s 856,000 Gold Maple Leaf coins that same year. Furthermore, in 1992, 1995, 1996, and 2000, the Philharmonic was the world’s best-selling gold coin, as attested to by the World Gold Council.

With the introduction of the Euro, the Gold Philharmonic 1 oz coin would be valued at 100 euros. As a result, it became one of the few gold bullion coins to circulate with the same design under two different denominations. It would take nearly 20 years for the Mint to develop a silver line, and in 2008, the 1 oz silver version of the coin was released. As the country had already shifted to the euro, this new coin was given a face value of 1.50 euros. The 1 oz Platinum Philharmonic, which was introduced in 2016, also has a denomination of 100 euros.

Interestingly, gold Philharmonic coins are exempt from VAT in most European countries while the silver version is assessed at a reduced rate.