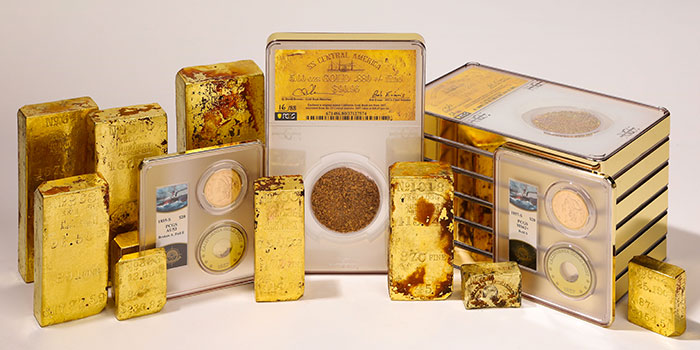 Blanchard sourced the gold ingots from a single private collection. The collector was a partner in the California Gold Marketing Group that acquired the shipwreck gold from the SS Central America recovery excavation in 1988.

SS Central America was one of many ships that transported gold from California to the East Coast. On the fateful day of September 3, 1957, she set sail from Colón, Panama, en route to New York City. On September 9, the ship encountered a Category 2 hurricane off the coast of the Carolinas.

Rapidly taking on water, the crew formed a bucket brigade, but the damage was too great to overcome. The boiler failed and then the second half of the storm hit, sealing the fate of both ship and crew. Central America, loaded with gold then valued at $8M, sank to the ocean floor.

This massive loss of gold rocked an already shaky economy, contributing to the Panic of 1857. Banks were unable to cover their loans and did not fully recover until after the Civil War.

“These top-quality, ultra-rare gold assay bars sold so quickly because no other firm has offered this wide range of prime choice, smaller bars in one place in 20 years,” said Baudot. “When these California Gold Rush era bars became available, the demand and desire to own a true numismatic rarity was overwhelming. Supply in the rare coin market is very tight. Top-quality coins are being scooped up at record pace when they become available due to the challenge to acquire rarities now.”

The COVID-19 pandemic increased supply challenges in the numismatic community amid a lack of coin shows and limited auctions, which resulted in very few rarities emerging for sale over the past year.

While supply has decreased, investor demand to acquire ultra-rare coins has increased.

“People are buying gold and rare coins to protect against the uncertain economic environment we face that includes inflationary government policies like the stimulus packages. The government creates the money for these stimulus packages through borrowing via new Treasury debt – that increases the national debt and that is where inflation comes from,” Baudot said.

“Investors want to own gold and rare coins because they are a warm blanket that helps people sleep better at night,” he added.

Blanchard still offers two remaining SS Central America gold ingots, yet these are not expected to remain available for long.

The gold ingots placed by Blanchard this month include:

Blanchard’s offerings highlight the firm’s ability to secure quality rarities for its clients in a very tight market.

“For over four decades, Blanchard & Co. has been the premier rare coin dealer in the country. With a specialty in legacy coins, we have placed more important numismatic coins than anyone in the industry. We truly have incredible reach within the numismatic community and can almost always find whatever you are looking for,” Baudot said.

Founded in 1975, Blanchard and Company is one of the largest and most respected investment firms in the United States that specializes in precious metals and rare coins. Headquartered in New Orleans, Blanchard has owned and sold more than half of the published 100 Greatest U.S. Coins, with over $1 billion in sales in the last five years alone. With over 450,000 customers to date, Blanchard has provided investors and collectors with the expert consultation they need to strategically acquire American numismatic rarities and gold, silver, platinum, and palladium bullion.