First published in the September 26, 2011, issue of Coin World 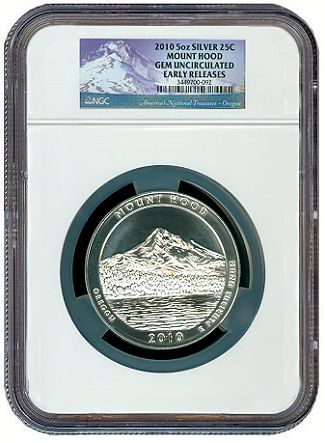 As bullion continues to soar, one series whose fate is tied to silver comprises the America the Beautiful .999 fine 5-ounce silver quarter dollars.

The Mint offers two versions of each issue: bullion examples that are available to authorized purchasers at a $9.75-per-coin premium over the price of silver, and Uncirculated collector versions that receive a “vapor blast” finish, have a P Mint mark and are sold individually by the U.S. Mint directly to collectors.

The release of the 2010 bullion pieces at the start of this year caused a frenzy at the Florida United Numismatists show in January, as the Mint had announced that only 33,000 sets would be produced. A handful of authorized purchasers sold the five-coin sets for around $950 to collectors, the dealers hindered by cumbersome restrictions set by the Mint regarding the distribution of the sets.

At the FUN show, five-coin sets were selling for as much as $2,700, with a wholesale market of $1,800 to $2,000 that lasted for the next month, falling to the $1,500 level by mid-February. Prices have settled at that level today, although as the price of silver has increased from $30 in February to around $42.50 as of Sept. 8, the premium over bullion value has shrunk.

The 2010-P Hot Springs 5-ounce coin was the first collector version offered by the Mint. Sales began on April 28, with a mintage of just 27,000 and a price of $279.95. These coins took more than a week to finally sell out and collectors complained about ordering problems.

A modest secondary market for the Uncirculated Hot Springs issue has emerged, with examples selling for as much as $400.

Collectors are no doubt considering the cost involved in keeping the set — which will eventually grow to 56 coins by 2021 — current, as well as the hassle in buying the Uncirculated collector coins individually from the Mint.

One hopes that the Mint will continue to work with the mintage levels and ordering mechanisms to make the coins more attractive to collectors going forward.

Steve Roach is a Dallas, Texas, based rare coin appraiser and fine art advisor who writes the world’s most widely read rare coin market analysis each week in the pages of Coin World.  He is also a lawyer who writes on legal topics involving fine art and collectibles, and helps create estate plans for collections. Visit him online at http://www.steveroachonline.com, join him on LinkedIn at http://www.linkedin.com/in/stevenroach or follow him on twitter @roachdotsteve