By Steve Roach – http://www.steveroachonline.com
First published in the August 1, 2011, issue of Coin World 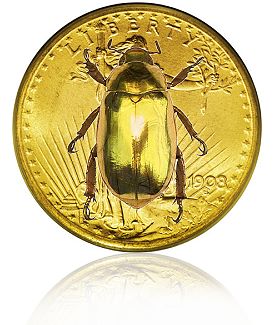 The source of the rise — the sixth day in a row where the price of gold increased — was a broad increase in the global demand for gold as a safe haven asset.

The July 13 rise was fueled by comments by Federal Reserve Chairman Ben Bernanke to Congress that suggested there might be another round of monetary stimulus, combined with Congress’ inability to reach a deal on the debt ceiling, which may mean that the Treasury could run out of money to pay existing loans.

Globally, concern in Europe with Italy, Spain, Greece, Ireland and Portugal all experiencing credit problems made precious metals attractive, and silver rose more than 7 percent on July 13 to a high of $38.43 an ounce, an impressive gain but still more than 20 percent below its recent high of nearly $50 an ounce in April.

The renewed confidence in gold may be what it takes to break the pre-1933 generic U.S. gold coin market out of its recent sleepy period as most generics still trade at multi-year low premiums relative to their melt values.

Further, the widespread media coverage of the Langbord 1933 Saint-Gaudens gold $20 double eagle trial may bring some new blood into the hobby, interested in the coin’s dramatic story and introduced to the beauty and availability of Saint-Gaudens double eagles.

In other market news, initial buyers of the Mint’s recent offering of Proof 2011-W American Eagle silver dollars were able to make some fast profits. Several big dealers are paying $66 for these coins, which can still be purchased from the Mint for $59.95 as of July 13, but 100-coin ordering limits imposed by the Mint prevent dealers from getting large quantities.

The Proof gold American Eagle market has also seen a boost recently, with dealers paying slight premiums for 1988 to 1991 four-coin sets, and quarter-ounce $10 and half-ounce $25 coins. However, the release of the 2011 issues has added enough supply to make a repeat of last year’s big American Eagle gold coin prices unlikely.