By Ken Edwards and Richard Schwary of California Numismatic Investments Inc ……
Gold closed up $3.20 at $1,320.60. So gold markets continue to make some noise – most of today’s higher number is follow through from yesterday’s gain – pricing held steady between $1,320.00 and $1,321.00 but considering the big drop in the dollar today I’m surprised gold did not close stronger. The Dollar Index was steady on the open (92.50) then weakened (91.80) because the euro got stronger.

The European Central Bank (ECB) claimed in their most recent minutes that they might “revisit” their interest rate thinking. This was considered hawkish so the euro moved higher and the dollar lower.

There are other factors leading to some confusion – higher EU inflation – lower US inflation. Are the Chinese moving away from US Treasuries? They denied the rumor. Pence claims the US will put “maximum” pressure on North Korea to abandon their nuclear ambitions. Iran is using the $100 billion we gave them to stop their nuclear plans (never happen) to encourage North Korea and other terrorist regimes. The geopolitical scene is quiet but there are plenty of red flags. 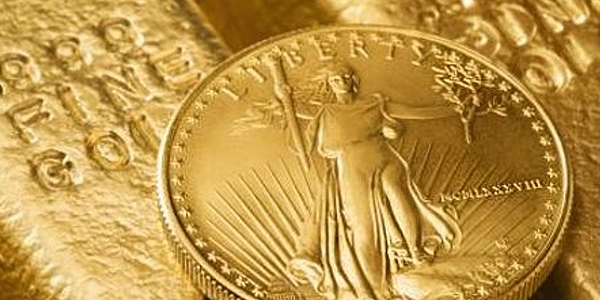 Stocks have had a great run and this introduces profit taking motivation – the point being – all of these side currents introduce financial uncertainty which helps support the price of gold.

This uncertainty is at the center of gold’s pricing discussion because we are once again at a technically important turning point. The short-term picture favors the bulls but we have seen this movie a number of times.

Commentators want to see more confirmation – meaning higher gold numbers. At the same time traders are cautious because this price region is where gold has lost its traction. We are right in the middle of the usual fallback position created by short term paper taking profits.

For now the bears are still in control of dollar strength – the Dollar Index having moved from 94.00 through 92.00 this past month. And crude oil has moved to three-year highs – a big plus.

But for gold to push higher – meaning consistent numbers above $1,340.00 the dollar has to breakdown from 92.00 – which is possible but the index has recently been flat around 92.00.

Supporting the notion of a weaker dollar is the idea that Trump and most in world government want weaker currencies – which over time usually pushes inflation numbers higher.

The Dollar Index has been down about 10% this past year which supports still lower numbers but in the wider three-year picture the index seems happy around 95.00.

Today’s flurry in gold prices did make the phones ring and this market does create recurring buzz – not the kind of buzz that creates a line in our parking lot but enough to keep things interesting.

I think however that pricing (and therefore public interest) faces two important overhead levels – the first being $1,340.00 and the second being $1,400.00. We have not seen the latter since the summer of 2013 but either will do nicely.

Now couple that potential break to the upside with a round of stock market weakness or a surprise US inflation blip or something else which confirms real gold bullion is being used as a safe haven and we are again off to the races.

The great part of the current market is that to a small degree this process is already in play but with both the FOMC and ECB now turning hawkish it will take more to make this pot boil.

This from Zaner Gold/Silver (Chicago) – “The gold market forged a very extensive trading range on Wednesday of $20 per ounce and was able to reject an initial four day low to close impressively and in positive territory, and overnight it stayed in the middle of yesterday’s range and close to unchanged from Wednesday’s close. Clearly weakness in the dollar, suggestions that the Chinese might slow US Treasury purchases and further strength in crude oil leaves the bull camp in gold and silver with plenty of ammunition. The gold market was probably supported yesterday by generally bullish UBS gold price projections, but it should also be noted that UBS was positive toward industrial demand for both silver and platinum. In an even more important view, UBS said they expect the long-term inverse correlation between US rates and gold to be reestablished and that was clearly evidenced in the Wednesday trade. Typically the gold market sees higher rates as a development that tamps down inflationary expectations and perhaps could slow economic activity, which in turn can slow physical demand for gold and other commodities. Higher rates also support the dollar and pressure gold and other safe-havens. But the fact that the dollar fell when rates increased yesterday was a significant change, and seeing a direct relationship between US yields in gold develop would be a signal of a “change” in the metals markets. The world’s largest gold ETF saw their holdings fall by 2.95 tonnes on Wednesday to reach their lowest level since August 31st.”

A reminder we will be closed this coming Monday, January 15 for the Martin Luther King, Jr. holiday – banks, post office and exchanges will also be closed.

The three day weekend will likely be a “cooler” but who knows – Congress is struggling with budgets and the official government shutdown date is January 19. No one takes this seriously anymore but they should – the process foreshadows our out of control spending.

This from Zaner Platinum (Chicago) – “The PGM markets were probably supported yesterday by positive UBS views toward industrial demand for both silver and platinum, especially since they seemed to talk up platinum prospects. The UBS forecast for platinum called for a return to $1,000, and in our book, that isn’t an overly aggressive targeting. More importantly, the market was presented with favorable platinum shares price action and talk of capital inflows that could foster some positive hype toward platinum and palladium futures. In the recent past, most of the “hype” toward PGM markets seemed to come from the palladium futures price action. Seeing the April platinum contract respect recent consolidation lows around $972 and seeing the market close above $975 would seem to project a near term run to $990.”

The GoldDealer.com Unscientific Activity Scale is a “3” for Thursday. The CNI Activity Scale takes into consideration volume and the hedge book: (Friday – 4) (Monday – 4) (Tuesday – 4). The scale (1 through 10) is a reliable way to understand our volume numbers. The Activity Scale is weighted and is not necessarily real time – meaning we could be busy and see a low number – or be slow and see a high number. This is true because of the way our computer runs what we call the “book”. Our “activity” is better understood from a wider point of view. If the numbers are increasing – it would indicate things are busier – decreasing numbers over a longer period would indicate volume is moving lower.