Gold closed up $16.90 at $1,322.70 today. It’s pretty clear the world markets are getting nervous and gold has broken higher. Not long ago I said these markets could break either way – and just because gold moved higher still does not mean our wait and gold’s long price consolidation is over.

Keep your eye on the dollar – the index today moved from 97.8 through 97.5 enough weakness to also encourage gold prices. But remember the index was around 95.00 the beginning of this year and for gold to catch fire we are going to have to see that massive three-point gain – melt.

The reason traders are a bit ahead of the learning curve here is because of the growing recession talk. There are so many different tariff scenarios to play with here that the conspiracy advocates will get drunk on the speculation.

But keep in mind that some of this tuff tariff talk (maybe more than some) is an old Trump tactic to gain leverage. So why is this time around particularly stressful? First the Chinese are retaliating (suspending rare earth minerals to the US for example). Second, he is threatening tariffs against our friends in Mexico in a new and innovative way. Stop the deplorable caravan situation or face the economic consequences of tariffs. This will likely be challenged in the courts – does the president have the legal right to use tariffs to correct social issues? Way above my paygrade but it is easy to see that the “troubles” list is growing.

And some news in the gold sector is bearish – look at crude oil. After hitting an inflationary high of 66.00 in April we are now looking at a technically weak market approaching $50.00 even with trouble in the Middle East relative to Iran.

So the old question as to whether gold can now approach and move above $1350.00 remains unanswered. This most recent bullish scenario has been presented to the world for times in the past five years – which brings to mind one of my favorite aphorisms.

Abraham Lincoln – January 1863 – “The hen is the wisest of all the animal creation because she never cackles until after the egg has been laid.”

My opinion remains the same – it makes sense to buy weakness – it was not long ago that gold was defensive and the question was asked whether gold would hold up at $1,200.00? Those who took advantage of these lower prices are feeling pretty good about their decision regardless of whether they decide to double down today or feel the market is getting pricy.

The bigger question for long-term gold holders is whether our financial friend can manage above $1,350.00? If the answer is yes, hold on to your hat because your patience will be rewarded. If on the other hand, we are stuck in that predictable sideways market which has been in place for years – keep your powder dry and buy weakness. You still have time to join this party and sooner or later the world will realize this still in place and bogus fiat currency printing plan has a shelf life. Once that realization comes home to the still trusting masses I believe gold will really sparkle. 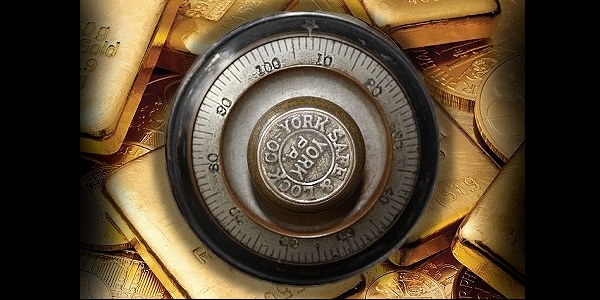 This from Zaner (Chicago) – “Most global equity markets started the new week out on a weaker footing while the CSI 300 and the Russian market showed some positive traction. Economic information released overnight from China showed unchanged manufacturing PMI readings for May. From Japan the Nikkei manufacturing PMI for May came in a touch better than expected while Swiss Consumer prices edged higher by 0.3% on a month over month basis. From Italy manufacturing PMI for May came in moderately better-than-expected. However German manufacturing PMI for May was a touch weaker than the prior month but on expectations. Overall EU manufacturing PMI readings for May down ticked by.2 relative to the prior month while UK manufacturing PMI came in much weaker than expected. Over the weekend, a Chinese government white paper on trade negotiations said that the US should remove all additional tariffs and that China’s purchases of US goods should be “realistic”. The North American session will start out with May Markit manufacturing PMI readings from the US and Canada, both of which are forecast to hold steady with their previous readings. The May ISM manufacturing index is expected to have a moderate uptick from April’s 52.8 reading. April construction spending is forecast to have a moderate increase from March’s -0.9% reading. St. Louis Fed President Bullard and San Francisco Fed President Daly will speak during afternoon US trading hours.

With the Treasury bond market literally on fire, it is clear that fears of recession are burning brightly in the headlines and consequently gold is a direct benefactor. Obviously, another US trade war front with Mexico combined with suggestions from a Chinese “white paper” indicating Chinese purchases of US goods should be “realistic” shows that tensions remain in place and therefore safe haven buying is coming from a number of storylines. Furthermore, some trade sources have interpreted recent Fed comments to be shifting “toward” cutting interest rates. Not surprisingly a number of gold analysts have turned very bullish toward the metal after last Friday’s rise above $1300 as that move fostered targeting up around $1,335. Obviously, the growing list of geopolitical safe haven issues have created a favorable environment for gold, but a certain amount of direction for gold will be determined by the action in equities. In other words, the need for a safe haven in the presence of anxiety will be signaled by the equity markets which finished the month of May with massive declines on the month. We would suggest the classic physical demand side of the equation is also supportive given the latest World Gold Council demand figures. Another potentially supportive development came from India at the end of last week with expectations for the new government to take steps to develop gold as an asset class. The policy initiatives are also expected to suggest a reduction in the import duty on gold from 10% to 3%. In the end, unless the US relents on the Mexican tariffs or there are signs of renewed US/Chinese trade talks, an environment of anxiety and weakness in equities should keep gold on an upward track. Gold positioning in the Commitments of Traders for the week ending May 28th showed Managed Money traders added 8,756 contracts to their already long position and are now net long 33,134. Non-Commercial & Non-Reportable traders were net long 108,732 contracts after increasing their already long position by 7,548 contracts. While the silver market has shown some positive correlation with gold and it managed to climb above a four-month-old downtrend channel resistance line last week, we are suspicious of the bull case. However, the latest positioning report showed silver to be net “short” and therefore the potential for stop-loss selling should be reduced. Silver positioning in the Commitments of Traders for the week ending May 28th showed Managed Money traders were net short 39,042 contracts after increasing their already short position by 8,182 contracts. Non-Commercial & Non-Reportable traders net sold 4,427 contracts which moved them from a net long to a net short position of 3,765 contracts.

While the palladium market attempted an upside breakout extension last week, it closed poorly last week and would appear to be poised to test the bottom of the May consolidation. In fact, even though the palladium market showed the capacity to rally last week (in the face of the deteriorating global economic condition) it is difficult for us to discount the potential negative impact on demand for PGM’s in the event the global equity market washout continues. In fact, the market has seen definitive signs of weakening of auto sales figures and the “rare earth” situation only appears to be an indirect impact on platinum and palladium. However, both platinum and palladium have mostly liquidated their spec and fund long positioning with platinum’s May decline bringing the spec long positioning closer to the lowest levels of the year. The Commitments of Traders report for the week ending May 28th showed Platinum Managed Money traders went from a net long to a net short position of 10,128 contracts after net selling 10,247 contracts. Non-Commercial & Non-Reportable traders reduced their net long position by 7,089 contracts to a net long 14,762 contracts. The Commitments of Traders report for the week ending May 28th showed Palladium Managed Money traders are net long 9,180 contracts after net buying 897 contracts. Non-Commercial & Non-Reportable traders added 686 contracts to their already long position and are now net long 8,784.

The path of least resistance is pointing up in gold and to a lesser degree in silver. In fact, given that equities ranged down sharply and closed right on their lows last Friday and are starting off under pressure this morning, that suggests August gold should continue to work higher toward the next resistance level of $1,335.80. In fact in the event that global equity markets start the week off with declines in excess of 1% it might be possible for August gold this week to streak above $1,335. Unfortunately given the sharp range up move last Friday credible support in August gold isn’t seen until $1,311.20.”