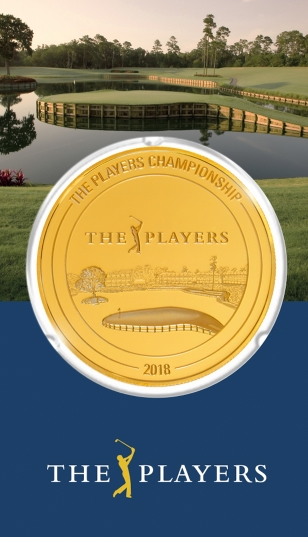 These beautiful, limited-edition coins feature the iconic 17th green and hole, and are only available from Rosland Capital. Known as the “Island Green”, the par-3 17th hole is the most famous of this renowned course.

The coins are legal tender and bear a portrait of Her Majesty Queen Elizabeth II on the obverse. These collectors’ items are specially minted as proofs, their highest level of quality, by the world-famous, Swiss-based PAMP SA.

To celebrate the coins’ debut, Jhonattan Vegas, a three-time PGA TOUR champion and member of the 2017 Presidents Cup International Team, will use a unique 1.5-oz gold specimen coin minted by PAMP SA as his ball marker throughout the tournament.

The coins in this series are currently available in ¼ oz gold, 1.5 oz gold, and 1.5 oz silver, in very limited quantities, in addition to a kilo gold coin, of which only five will ever be minted. The gold coins are 999.9 fine gold, while the silver coins are 999.0 fine silver.

The protective packaging for each coin features the beautiful 17th hole, echoing the design on the coin itself. Shown on the back of each package, which provides a numbered certificate of authenticity, are statements of metal purity and weight, and the signature of the Swiss Assayer Fondeur who assures the quality of the production. A 1.5 oz silver coin is included at no charge with the purchase of each 1.5 oz gold coin – each set comes in a handsome presentation case. No more than 500 sets will be offered. Silver coins are also available separately in a limited edition, as are the ¼ oz gold coins.

Rosland Capital CEO, Marin Aleksov, took the lead in presenting this new range of PGA TOUR coins: “We’re very proud of these beautiful coins, and look forward to showing them to PGA TOUR fans at Sawgrass during THE PLAYERS CHAMPIONSHIP. It should be a great event”. The PGA TOUR is the leading global platform in professional golf, showcasing the highest expression of excellence, both on and off the course. The PGA TOUR’s mission is to entertain and inspire its fans, deliver substantial value to its partners, create outlets for volunteers to give back, generate significant charitable and economic impact in the communities in which it plays, grow and protect the game of golf and provide financial opportunities for TOUR players.

The PGA TOUR co-sanctions more than 130 tournaments on the PGA TOUR, PGA TOUR Champions, Web.com Tour, PGA TOUR Latinoamérica, Mackenzie Tour-PGA TOUR Canada and PGA TOUR-China. Members on the PGA TOUR represent the world’s best players, hailing from 25 countries (84 members are from outside the United States). Worldwide, PGA TOUR tournaments are broadcast to more than one billion households in 226 countries and territories in 23 languages. Virtually all tournaments are organized as non-profit organizations in order to maximize charitable giving. In 2017, tournaments across all Tours generated a record of more than $180 million for local and national charitable organizations, bringing the all-time total to $2.65 billion.

The PGA TOUR’s web site is PGATOUR.COM, the No. 1 site in golf, and the organization is headquartered in Ponte Vedra Beach, Florida.