Following the highly successful launch of an edge struck silver Britannia coin, The Royal Mint has now introduced a new gold Britannia bullion coin for 2014 which bear an intricate horse design around its milled edge.

Last year The Royal Mint announced a strategic partnership with precious metals dealer A-Mark to distribute a version of their traditional 1oz Silver Britannia Bullion coin, specially designed to celebrate the Chinese ‘Year of the Snake’, following the launch of a new fineness of 999.9 gold and 999 silver in their highly-regarded bullion range. 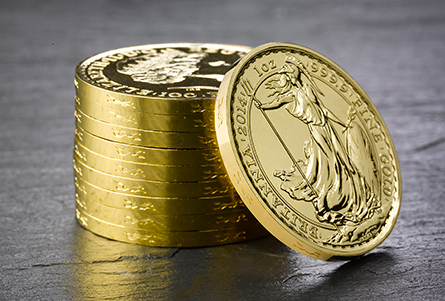 It was the first time that the 1100 year-old Royal Mint’s classic 1oz Silver Britannia was embellished with a symbol from the Chinese lunar-solar calendar, and the first time that this legendary coin, bearing Philip Nathan’s instantly-recognisable ‘Britannia’, carried any part of a design around its milled edge.

Shane Bissett, The Royal Mint’s Director of Bullion and Commemorative Coin said “We are pleased to have the opportunity to work with a major distributor to the world’s bullion market and are continuing to see our relationship with A-Mark go from strength to strength. The Royal Mint’s enhanced bullion proposition has been well received worldwide since its launch in November 2012, followed by the introduction of our high security precious metal vault storage facility. We have experienced a growth in the demand for our bullion coins in the period since, and this has been boosted further by the fact that The Royal Mint’s classic Britannia gold and silver bullion coins are eligible for US Individual Retirement Accounts.”

Royal Mint Chief Engraver, Gordon Summers said “Our main challenge in developing the Lunar Britannia coin was incorporating the lunar symbol around the edge of the coin with clarity and quality of design, yet retaining the beauty and the impact of Philip Nathan’s Britannia figure”.

The Royal Mint’s ‘Year of the Horse’ Britannia coins are available in 1oz silver or 1oz gold exclusively from A-Mark at www.amark.com.

As well as over 1,000 years of producing British coinage, The Royal Mint has long been trusted with the currencies of other countries. It currently serves more than 100 issuing authorities around the world and meet approximately 15% of global demand, making us the world’s leading export mint.