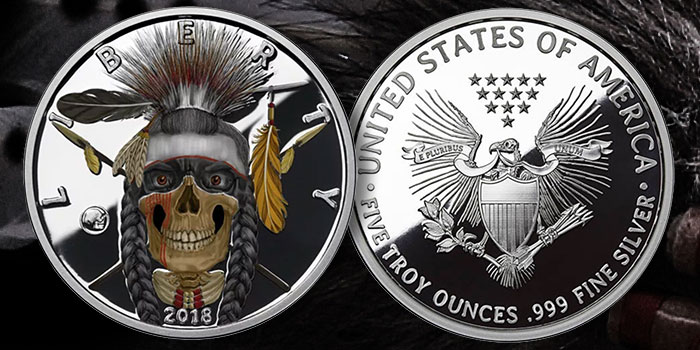 The American Western Skulls Collection of silver rounds debuted in late 2017 and carried on through 2018 with six exciting designs to capture the imagination of any Wild West enthusiast. The collection of silver for sale in this series is startling in its variety, with 1 oz rounds and 5 oz rounds available in proof, antique, and colorized proof options for each new design. Late 2018 brought a new release of designs in this series with more to come in 2019. Right now, JM Bullion is proud to highlight the newly-issued design in the form of the Indian Warrior.

A Twist on an Earlier Design

Early in the American Western Skulls Collection, there was a design of another indigenous combatant. The Wild West was often characterized as an ongoing conflict between the expansionist desires of the United States and the desire of indigenous tribes to hold on to their lands in the West, particularly having seen how tribes in the eastern United States had been treated in the century prior to the Wild West era.

The first design was known as the Indian Brave and bore a very close resemblance to the character Magua from the epic novel-turned-feature-film Last of the Mohicans. The new skeletal figure in the Indian Warrior release appears less aggressive and depicts a different tribe’s take on warfare and preparation.

The Image of the Indian Warrior

On the obverse of the new Indian Warrior Silver Round is the design of an indigenous warrior with spears crossed behind his head and a feather weaved through the spiked hair of the brave fighter. The Indian Warrior also has face paint and a necklace around his neck, along with a distinct new addition to the series in the form of an inset mark on this side. Just to the right of the letter “L” in the word “LIBERTY” is a small skull mark that is new to the series with the release of the new designs starting in late 2018.

The reverse side of American Western Skulls Indian Warrior Rounds features a common design that dates all the way back to the 2017 debut of the Indian Chief. The “fried” eagle appears on this side of all rounds in the series. At a glance, the design appears very similar to the US heraldic eagle. You’ll find the US national shield with an eagle clutching arrows and an olive branch in its talons. There are 13 stars in a triangular constellation above the eagle’s head, but there is something different. As the “fried eagle” name suggests, this bird is dead and lacks all of its features. Engravings include “United States of America”, “One Troy Ounce .999 Fine Silver”, and the bird’s ribbon includes “E Pluribus Unum”. For the 5 oz rounds, the engraving indicates “Five Troy Ounce” instead.

Options in the Indian Warrior Release

In keeping with all other issues in the series, the American Western Skulls Indian Warrior is available in 1 oz silver and 5 oz silver rounds. For both weights, you’ll find a proof, antique, and colorized proof option with the following mintage figures:

This is a shift downward from the original production figures in the series. Originally, the rounds included 2,000 1 oz proof, 1,500 1 oz antique, 1,000 1 oz colorized proof, and 500 rounds each for the three options in 5 oz silver.

The proof silver rounds in this collection have frosted designs and mirrored background fields. Antique silver rounds have a unique polish that gives each one the appearance of ancient coinage with rough designs and overall rustic appearances. The colorized proofs are the most unique as there is distinct colorization added to each design. The Indian Warrior Silver Round features a vertical red stripe of face paint on the warrior with horizontal thick swaths of white across the forehead and black over the eyes. There is a singular red line between those two. The spiked hair features various shades of white, black, red, and orange. His hair is jet black and braided, white the feathers offer offsets of bright colors.

Each individual silver round is housed within a protective capsule at purchase and comes with a Certificate of Authenticity. That COA includes the same number found engraved onto the edge of the round.

The new American Western Skulls Collection Indian Warrior Round is now available to purchase from JM Bullion. Please feel free to reach out to us with your questions at 800-276-6508, online using our live chat, or via our email address. Don’t forget to follow our blog each week and track us on Facebook to learn more about the latest silver for sale in our catalog.