Standing firm against the mainstream’s bearish views on gold, Goldman Sachs is sticking with its $1,450 gold price projection for 2019 – a price level not seen since May 9, 2013. Goldman is also taking a contrarian position on the entire commodities sector, which has fallen on hard times this year. The firm reports being “overweight” in commodities since they expect a 10% rally over the next 12 months. Goldman sees more gold demand coming from China. They also consider gold a historical “hedge for policy uncertainty and downside global growth risks – the exact fears which are now on the rise.” With tensions rising over the trade war and product piracy in China, election meddling and saber-rattling in Russia, war threats by Iran, a shaky nuclear deal in North Korea and a controversial President under assault by his enemies in a mid-term election year, there is plenty of “policy uncertainty and global risk” out there now.

Coin collecting used to be called “The Hobby of Kings” because primarily wealthy aristocrats pursued it. Today, it is better known as “The King of Hobbies” – and far from being the province of the elite, it’s a thoroughly democratic pastime enjoyed by people of all ages and socioeconomic status. Its popularity has grown so dramatically, the U.S. Mint estimated during the height of the 50 States Quarters Program that there were 140 million collectors in the United States.

Coin collecting combines the excitement of a treasure hunt and the thrill of discovery with healthy doses of history and romance. Coins are often described as “history in your hands,” and the term is entirely accurate. Those gold coins in today’s hobby holders might well have been retrieved from a 19th-century shipwreck – or possibly recovered from the loot of an Old West train robbery. Or they might have spent decades in one of the great collections from a bygone generation. Pure gold is impervious to corrosion. So even after centuries at the bottom of the ocean, gold coins often emerge looking as good as new.

Scarcer, more valuable coins seldom turn up in circulation; they have to be purchased at a premium. Through the years, however, these have often over time proven to be extremely sound investments for those who bought them wisely – particularly those who concentrated on coins of unusual rarity, exceptional quality, or both. While their owners appreciate the history and beauty they embody, these coins often appreciate in value.

In some past bull markets, coins have drawn greater interest, and brought higher prices, when sold as components of comprehensive special collections or sets, more so than when they have been offered individually. In such cases, the whole, so to speak, has been greater than the sum of its parts. One reason for this is that fine collections often showcase the coins in the most appealing way and thus attract a broader pool of potential buyers.

Indeed, the value of some coins can increase substantially if they have reposed in fine, well-known collections. This quality, known as their “provenance,” gives them a special aura in the eyes of many collectors, much as precious gems are considered more desirable if they once belonged to a monarch or a movie star.

Through the years, virtually all of the most famous and most valuable U.S. coins have belonged at various times to one or more of the greatest collectors in the hobby. This is partly a matter of economics. Often, great collectors have been persons of considerable means, whose wealth enabled them to buy costly coins other hobbyists couldn’t afford. But savvy and shrewdness combined with working with reliable experts have enabled people of far more modest means to build important and valuable collections as well.

It’s instructive to see how one of the great names of collecting built his collection. 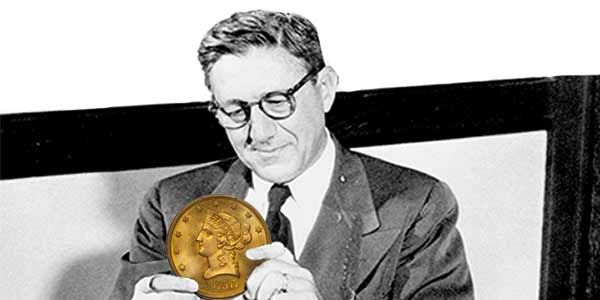 Louis E. Eliasberg Sr. came to be known as “The King of Coins” after he accomplished a feat many thought to be impossible: Over a period of less than two decades, from 1934 to 1950, Eliasberg assembled the only complete collection of U.S. coins – the only one that contained regular-issue coins of every denomination from every date they were issued and every mint that made them in those years. News of this achievement not only electrified fellow hobbyists, but impressed the nation. It was considered so significant that Life magazine, then read by millions of Americans, featured Eliasberg and his coins in a lavish photo layout.

Yet this “King of Coins” didn’t have kingly wealth. He lived comfortably on his income as a Baltimore banker. But his budget for buying coins was not unlimited. Nor was he known as a big spender.

Eliasberg wasn’t even a hobbyist when he started buying coins: He did so as a way to circumvent the Gold Surrender Order of 1933, which required U.S. citizens to turn in their gold coins, but exempted collectible coins. “I realized the only way I could legally acquire gold was by becoming a numismatist,” he explained years later. “So in 1934, to the extent of my means, I started buying gold coins.”

Soon bitten by the hobby bug, he started buying other coins as well, and within a few years he had built a respectable collection. Then, in 1942, came a marvelous opportunity: He was able to purchase outright the outstanding collection of John H. Clapp, in the process acquiring many rare coins he didn’t already possess. That’s when he began thinking seriously of pursuing the impossible dream: a U.S. coin collection with “one of everything.” He prepared a list of coins he lacked and started tracking them down.

“Eliasberg struck me as a gentleman,” one prominent numismatist later recalled. “He was tall, aristocratic, a genius at finance, but he didn’t know very much about coins … He knew more about making money.” His success at making money has become the stuff of legends in the coin collecting community. During the decade and a half it took him to complete his collection, Eliasberg spent less than $400,000. When the collection was sold, at a series of auctions between 1982 and 2005, it realized a grand total of roughly $55 million – more than 100 times what he had paid.

The gold coins he started buying in 1934 not only turned Eliasberg from a numismatic novice into a great collector, but also ended up confirming his status as a very successful investor: When his heirs put them up for sale in 1982, they brought more than $12 million. In short, even if he had never begun pursuing the seemingly impossible dream of collecting “one of everything,” Eliasberg would have made millions just through his decision to buy gold coins as collectibles.

Call an account representative today for more award-winning information on set building and how it can help your portfolio grow like Eliasberg’s.

All statements, opinions, pricing, and ideas herein are believed to be reliable, truthful and accurate to the best of the Publisher’s knowledge at this time. They are not guaranteed in any way by anybody and are subject to change over time. The Publisher disclaims and is not liable for any claims or losses which may be incurred by third parties while relying on information published herein. Individuals should not look at this publication as giving finance or investment advice or information for their individual suitability. All readers are advised to independently verify all representations made herein or by its representatives for your individual suitability before making your investment or collecting decisions. Arbitration: This company strives to handle customer complaint issues directly with customer in an expeditious manner. In the event an amicable resolution cannot be reached, you agree to accept binding arbitration. Any dispute, controversy, claim or disagreement arising out of or relating to transactions between you and this company shall be resolved by binding arbitration pursuant to the Federal Arbitration Act and conducted in Beaumont, Jefferson County, Texas. It is understood that the parties waive any right to a jury trial. Judgment upon the award rendered by the Arbitrator may be entered in any court having jurisdiction thereof. Reproduction or quotation of this newsletter is prohibited without written permission of the Publisher.