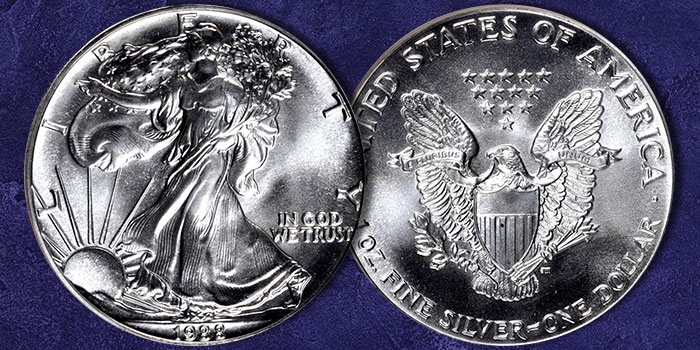 The American Silver Eagle, perhaps the most popular collectible coin program in modern history, was born out of Congress’ desire to dispose of the federal government’s massive silver stockpile, which at the time exceeded 139 million ounces.[1] Authorized on July 9, 1985 by the Liberty Coin Act (Public Law 99-61), American Silver Eagles were first minted and sold in 1986. Measuring 40.6 millimeters in diameter and weighing 31.103 grams, each coin weighs 1.000 troy ounces and is struck from .999 fine silver — the highest purity for any silver coin manufactured by the United States Mint. The coin was to feature a design “symbolic of Liberty on the obverse side; and… of an eagle on the reverse side…”[2]

Sales for the 1988 American Silver Eagle bullion coins in the first quarter of 1988 were roughly on par with the program’s strong start in 1987. By April, however, the pace of sales had slowed dramatically, and as a result, the end-of-year mintage of 1988-dated bullion strikes was only half that of the year before. Total mintage for the year: 5,004,646 coins – a number that would remain the bullion-strike series’ lowest until 1994.

As a collectible coin, the 1988 bullion strike is treated as a generic issue in grades MS-69 and below. In MS-70, the coin continues to exert a significant market premium (34.61 x 69 price for PCGS; 23.40 x 69 price for NGC). The NGC numbers are significantly down from where they were in 2014, and we note an annualized rate of return of -5.3% for the issue (keep in mind, this doesn’t even take inflation into account).

The PCGS MS-70 situation is completely different and should be discussed separately. On February 4, 2011, Heritage Auctions sold what was at the time the sole top pop 1988 Silver Eagle (Cert #3337729) for a then-record price of $9,775 USD. Two years later, GreatCollections sold the same coin (still the only PCGS MS70) for $27,500. What occurred between the two auctions was the release of the popular book American Silver Eagles, which is credited to artist and Silver Eagle reverse designer John Mercanti and former PCGS Vice President Miles Standish.

Standish created PCGS’s signature label program and Mercanti was a big draw. The book was the first such reference on the market and had a big impact in the promotion of the series. Prices for low-population PCGS top pop coins soared between 2011 and 2013. It didn’t take long, however, for populations to follow suit. It all happened in plain sight, but outside of some collector threads, little to no attention was paid to the issue.

Today, untoned 1988 PCGS MS-70 silver eagles routinely trade on GreatCollections and occasionally on eBay. A typical example will sell for between $1,750 and $1,800. The original Top Pop coin having now lost 93% of its “value”.

Demand for the date continues, and we expect this and all other “early date” Type 1 Silver Eagles to experience even more over time. Typical certified coins will likely hold their present value or gently appreciate. MS-70 coins will likely continue their price decline as additional coins come out of fresh “monster boxes”.

Some of these monster boxes will have the requisite characteristics to qualify for PCGS’ “First Strike” program. In 2014, a total of 93 First Strike coins were noted, all graded MS-69. Today, PCGS reports 950 First Strike MS-69s and five in MS-70. In February 2022, a buyer paid $7,650 for one of these examples in a GreatCollections sale. That individual really should have done their homework.

A Future Issue to be Aware of

CAC has carved out quite a devoted following in the rare coin market with their stickering service, but outside of a handful of 20th-century issues, has all but ignored modern and bullion coinage.

In talking with CAC President John Albanese, we know that at some point after the company transitions to grading and encapsulation, it will begin to accept modern coins and coins in the American Eagle program. This means that we will have to track the pricing performance of CAC-graded silver eagles at some point in 2023.

We predict that, despite CAC’s best efforts to inform its customers that modern bullion coins are not investment coins, those who specialize in this material will jump at the possibility to get their products in CAC holders and capitalize on the interest in the new service. We predict that these coins will sell for significant premiums due to their low initial populations and due to the perception on the part of some that CAC has “tougher” standards than PCGS or NGC.

Our advice? If you want CAC to grade your Silver Eagle, fine. But paying a premium over the 10x we recommend for MS-70s will be a long-term loser for you.